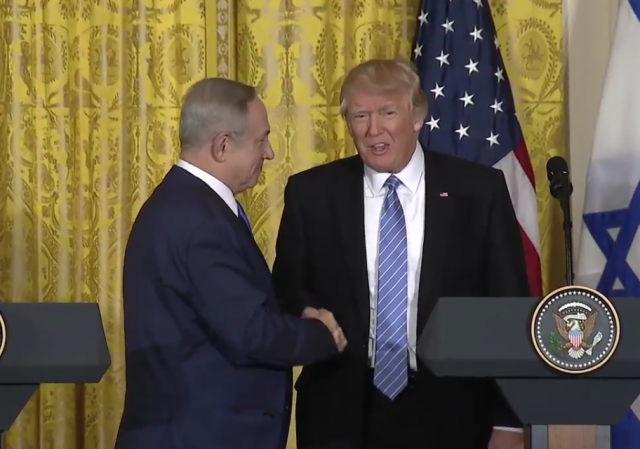 The partisan divide in Middle East sympathies, for Israel or the Palestinians, is now wider than at any point since 1978. Currently, 79% of Republicans say they sympathize more with Israel than the Palestinians, compared with just 27% of Democrats. 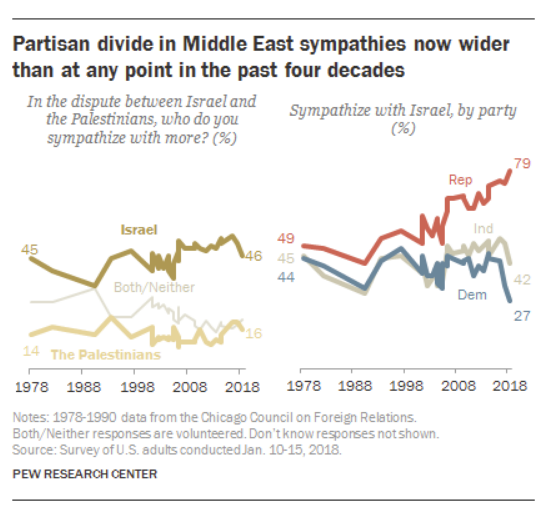 The gap is particularly strong among liberal Democrats: 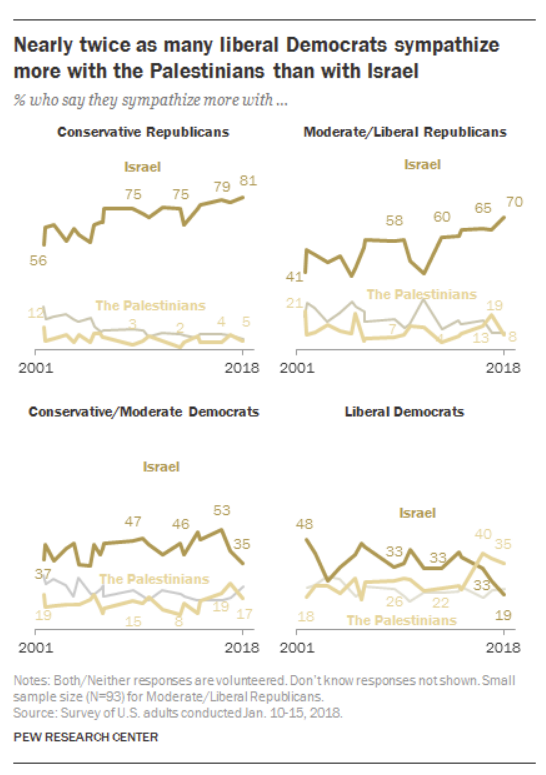 The results are being met with glee from anti-Israel activists, and with horror by Israel supporters. The blame is being laid on Trump’s strong support for Israel and close relationship with Bibi Netanyahu.

While Trump might contribute to liberals past year decline in sympathies for Israel, the fact is that liberal Democrats sympathizing less with Israel is over a 15 year trend.

We have covered that trend in many prior posts, including both Pew and Gallup surveys. The February 2017 Gallup survey showed continued strong support for Israel: 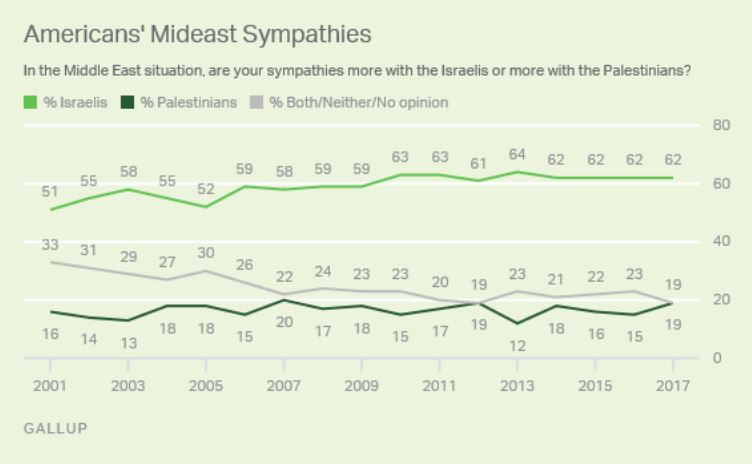 I’ll be interested to see the annual Gallup survey, which usually is released in February, and includes more data on undecided voters. In past Gallup surveys the decline in Democrat support had been more than offset by growth in Republican and Independents.

That the Trump factor is overstated is demonstrated by Pew Surveys dating back a decade. For example:

Views of Israel and the Palestinians have become more ideologically polarized. In early September 2001, just before the 9/11 terrorist attacks, there were only modest partisan and ideological differences in Israeli-Palestinian sympathies. But since then, and especially over the past decade, the share sympathizing more with Israel than with the Palestinians has increased among all ideological groups, with the exception of liberal Democrats.

The share of liberal Democrats who side more with the Palestinians than with Israel has nearly doubled since 2014 (from 21% to 40%) and is higher than at any point dating back to 2001.

Over the past decade, the share of Americans saying they sympathize more with Israel has grown among most ideological groups – with the exception of liberal Democrats….

There also are generational differences in sympathies in the Israeli-Palestinian conflict. Older generations tend to be more sympathetic toward Israel than younger generations.

In surveys taken by the Pew Research Center for the People & the Press, sympathy for Israel over the Palestinians has ranged from highs of 48% in September 1997 and May 2006, to a low of 37% in July 2005. During this period the number of those saying they sympathized most with the Palestinians in their dispute with Israel never rose above the 21% recorded in September 1993.

As can be seen from these excerpts, declining Democrat sympathy for Israel is a long term trend dating back approximately to 2001.  That year, of course, was the 9/11 attack and subsequent invasions of Afghanistan and Iraq.

As Aaron Blake at The Washington Post wrote in July 2014, reflecting Pew polling, Proud to be an American? You’re probably not a true liberal.

Michelle Obama took some heat in 2008 for saying that, “for the first time in my adult life I am proud of my country…”

As it turns out, that sentiment isn’t all that unusual on the far left of American politics. According to a new Pew Research Center study, only 40 percent of consistently liberal Americans say they often feel proud to be Americans.

The other 60 percent say that doesn’t describe them.

The finding is contained in Pew’s new “Political Typology” report, which breaks Americans down into seven different categories — rather than the usual three. Among the seven categories, “solid liberals” are the only group in which a majority say they aren’t regularly proud to be Americans….

The poll also shows many liberals don’t liken themselves to your average American. Just 51 percent say they feel as though they are “typical Americans” — as compared to three-quarters of conservatives and at least two-thirds of all the other groups.

Those findings were during the Obama presidency, so Trump hardly can be blamed for declining Democrat pride in being American.

Gallup polling found similar results in April 2017, which show a Democrat decline starting in 2013 and accelerating recently, Sharply Fewer Democrats Say They Are Proud to Be Americans: 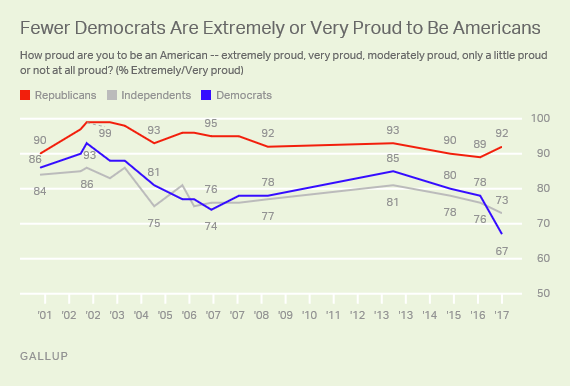 So what’s going on here?

I don’t diminish the significance of these findings. I’ve said for years that the erosion of support for Israel among liberal, particularly self-identified young progressives, is real and should be addressed.

It is, in part, the result of two decades of extreme anti-Israel activism on campuses led by professors, and the BDS movement. The BDS movement readily describes boycotts as a “tactic,” not the end goal. They don’t really care about whether people buy Israeli products and interact with Israelis. What matters is that Israel be cast in a negative light, and connected through the “intersectionality” theory to other problems around the world.  This is a generation-long propaganda campaign, and will take time to counter.

But it’s more than about Israel. It’s about a Democratic Party shifting hard left at its base. With that shift comes shrinking “sympathy” for Israel and shrinking pride in being American.

What gives the game away is that support for Palestinians among conservative/moderate Democrats (lol talk about an oxymoron) has NOT climbed.

In fact, it DROPPED in the same period.

This isn’t about supporting Palestine. It’s about sticking it to Israel.

and to pointout the elephant in the room, it’s about the Democrats openly embracing their true Fascist core.

I remember, just a year ago, many jewish democrats were going on about how anti-semitic Trump was (with no evidence) and how he was some right wing nazi who was out to persecute the jews.

Now, one year later, those same people are saying that Israel is no good anymore because Trump supports them too much. It’d be funny if it wasn’t so predictable, and so pathetic.

Half of American Jewry is literally suicidal:

“There are more than twice as many self-identified Jewish liberals as conservatives, while among the general public, this balance is nearly reversed…Interestingly, one Jewish subgroup does not fit this liberal, Democratic profile: Orthodox Jews.”
http://www.pewforum.org/2013/10/01/chapter-6-social-and-political-views/

“What African Americans lost by aligning with the Democratic Party:”
https://www.theatlantic.com/politics/archive/2016/03/exit-left/476190/

I am thankful to be an American, but not proud. I didn’t do anything to deserve it. May just a word game, but I reserve the word proud for things I’ve done.

Most of the world would be a shithole without the US. We seem to be losing Europe again.

I suppose I would say I’m thankful to be an American, and proud not to be some progressive idiot.

There’s little pride into being born into anything (race, etc.), but there is pride in BEING an American. It’s a state of mind, after all. You should be proud.

Most illegal aliens don’t have that pride, do not care to, and will never have it, making them a perfect base of voters for the fascist left running the democrat party.

Looks like Iran was right: Israel is the Little Satan, and America is the Great Satan. At least, that’s what it seems like to Democrats.

Remember the party they threw when Aminijad came and spoke in America.. they all agree with him

I’d like to see the decline in Democrat support contrasted with the rise of the hard Marxist left in the Democrat Party.

Most young Americans have no appreciation of their freedom or their American heritage. Our schools, which are leftist indoctrination centers, are to blame. But who is to blame for the loss of our schools to leftists? —

“44 percent of millennials would prefer to live in a socialist country, with another 7 percent saying the same about communism.”
http://www.sacbee.com/news/nation-world/national/article182765121.html

I grew up as a protestant in the south and I always remember a prayer that ended in praying for Israel. I wonder what happened.

In this approximately 15+ year time frame, another transparency to lay upon the overhead projector would be the rise of Fox News and MSNBC. It was really post 9/11 when they started to take off.

I think that could be a factor in the increasing divergence of partisan opinion over Israel and the Palestinians.

Just think that 50 years ago it was Democrats that supported Israel and Republicans that opposed it. So much so that Bill Buckley could joke that the way to get instant support from the left for the Vietnam War would be for Israel to annex South Vietnam.

It started changing when Israel had the effrontery to win the Six Day War, and thus forfeited its victim status. As Efrayim Kishon wrote shortly afterwards, we apologize to the world for not letting ourselves be wiped out so that you could feel sorry for us and signal your virtue by condemning our murderers. We know you would have marched in solidarity with us, named streets after us, perhaps even taken in a hundred refugees or so, but we forfeited all that just because we selfishly wanted to stay alive.

That Buckley bit is hilarious

I’m not so sure that the Republicans of say the ’60s could be accused of opposing Israel but rather simply ignoring Israel. Agree with your thoughts on the change in Democrats post ’67. Nixon took weapons and supplies from the US military (Active and Reserve) to support Israel in the ’73 war, though IIRC the Democrats weren’t particularly happy about it.

To me I’m not sure what Trump campaign did or didn’t do. It’s clear what Hillary did. It’s clear what the FBI/DOJ did. The fact that this FBI SH*TSTORM is not blowing the doors off every morning show demonstrates clear complicity to me. I’m guessing when the Hammer drops on the FBI and former DOJ officials

this whole charade will drop as well.

Idk if there is Arab oil money that has corrupted corporate America to push this Anti-Israel bull or what but it is a charade. A big fat Anti-American charade. It aught to be pretty revolutionary when the hammer finally drops.

Nothing we haven’t said before. But it really comes together now, doesn’t it?

Obama spied, Clinton colluded, DNC denied the nomination to the Jew, if only because it wasn’t his turn (wrong diversity class).

The biggest issue is what’s being taught in our public schools. The hatred of one’s own home is the reflection of communist infiltration into ALL areas of American society.
It must be fixed. At this point if you are are not proud to be an American – you should be made to leave.
It’s not my responsibility to give others an identity. If they’re NOT proud to be American then their loyalty is elsewhere and THAT’S where they need to go – NOT living beside me.

It seems that Senator Joe McCarthy (RIP) wasn’t all that wrong.

Turns out he wasn’t wrong at all:

At some point, in not too distant future, the leaders of the Democratic party will be embracing (figuratively and literally) the leaders of Hamas and Hezbollah. It will be interesting to hear the excuses of the leftist American Jews then.

same as they are today. If Iran (G-d forbid) wiped out Israel today. the leftist American Jews would just say, “It’s their own fault; they really shouldn’t have been there in the first place.”

At the very least they’ll be blaming Netanyahu.

Even for the GOPe, the worm has turned. (But barely.)