They believe he made false statements to the FBI. 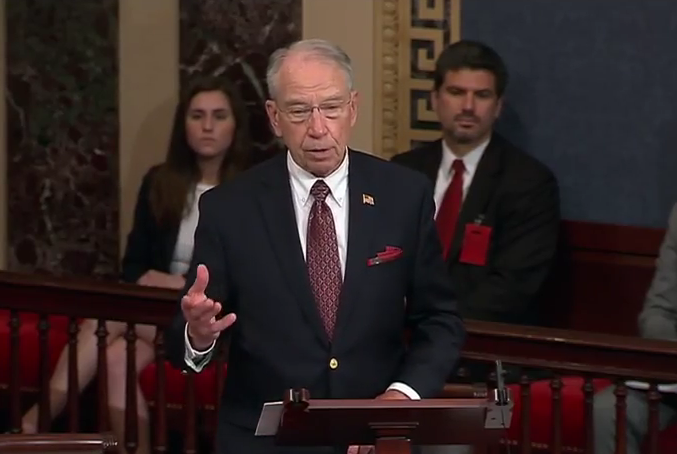 Senate Judiciary Chairman Chuck Grassley and Sen. Lindsey Graham (R-SC), also a member of the committee, have asked the Department of Justice to investigate Christopher Steele, the author of the infamous dossier on then-candidate Donald Trump.

The senators told the DOJ that they believe Steele made false statements to the FBI concerning his talks with news outlets about the dossier.

NEW: GOP Senators Grassley and Graham are calling for a criminal investigation into the author of the “Trump Dossier,” Christopher Steele. Say have reason to believe he made false statements to investigators: pic.twitter.com/VCVTxeL6CO

The two men did not release or mention the evidence they have that led to their conclusions, but sent a “classified memorandum” specifically to Deputy Attorney General Rod Rosenstein and FBI Director Christopher Wray with that information.

The code noted in their statement “refers to knowingly and willfully making false or misleading statements to federal authorities.”

Of course the Democrats on the panel flew off the handle. From Politico:

“I wasn’t consulted about this referral nor were any of my Democratic colleagues,” said Sen. Dianne Feinstein (D-Calif.), the top Democrat on Grassley’s committee. “I think this referral is unfortunate as it’s clearly another effort to deflect attention from what should be the committee’s top priority: determining whether there was collusion between the Trump campaign and Russia to influence the election and whether there was subsequent obstruction of justice.”

One congressional aide, speaking on condition of anonymity, said the decision by Grassley and Graham to refer Steele to the Justice Department raises an obvious anomaly.

“They are referring to DOJ a criminal prosecution based on documents DOJ gave them and based on witness testimony to the DOJ,” the aide said.

Steele, a former British spy, compiled the dossier for Fusion GPS. Former FBI Director James Comey told a House panel in March that the dossier was filled with “salacious and unverified” allegations against Trump and those who worked with him.

Back in November, Byron York reminded everyone that the FBI has not verified the information in the 35 page dossier that was funded by the DNC and failed Democratic presidential candidate Hillary Clinton’s campaign:

An August 24, 2017 subpoena from the House Intelligence Committee to the FBI and Justice Department asked for information on the bureau’s efforts to validate the dossier. Specifically, the subpoena demanded “any documents, if they exist, that memorialize DOJ and/or FBI efforts to corroborate, validate, or evaluate information provided by Mr. Steele and/or sub-sources and/or contained in the ‘Trump Dossier.'”

According to sources familiar with the matter, neither the FBI nor the Justice Department has provided documents in response to that part of the committee’s subpoena. But in face-to-face briefings with congressional staff, according to those sources, FBI and DOJ officials have said they cannot verify the dossier’s charges of a conspiracy between the Russian government and the Trump campaign.

The House Intelligence Committee has become frustrated by testimony from FBI Deputy Director Andrew McCabe since he did not provide them with more information on the dossier and contradicted testimony of former witnesses.

The lawmakers asked him which part of the dossier was true and McCabe only pointed to the part “that the unpaid, low-level Trump foreign policy advisor Carter Page visited Moscow in July 2016.”

notamemberofanyorganizedpolicital in reply to Petrushka. | January 5, 2018 at 5:19 pm

You mean the Federal Government agency of F.I.B. Lied?????

Interesting theory at:
https://theconservativetreehouse.com/2018/01/05/one-bluff-called-senators-graham-and-grassley-send-criminal-referral-to-doj/
That the real target here Is the top layer of the DoJ and FBI. The idea is that the referral is based on information they got from them, and if it isn’t accurate, then they are the liars, not Steele. Someone is lying to them, and they are pushing for a special prosecutor to figure it out – esp since the top of those agencies can’t be trusted to investigate themselves. Apparently/supposedly the classified information that they are sending Rosenstein lays out the discrepancies. We shall see.

Public breaking with Bannon. Dropping the investigation into voter fraud. Now Congress is suddenly pushing back on the Russia investigation madness.

Methinks someone made a deal.

Voter investigation was turned over to DHS, they have far more legal powers than the committee. Dems won’t be happy if the DHS starts taking testimony and getting federal warrants.

Silly Senators. Everybody knows that while if anyone to the Right of Trotsky clears their throat in the presence of an FBI agent they can be charged with lying to the FBI; any Leftist or someone employed by the Left [like the FBI] can lie with impunity and it will automatically be found that there is no criminal intent. It is all Maskirova for Grassley and Graham.

And if Sessions simply ignores this, what is anybody gonna do about it?

Right. To the two men on the entire planet least likely to do anything useful about it.

They’ll ignore it until prodded, then hem and haw and stall. Just as they’ve been doing.

Maybe, but things seem to be breaking right now with Nunes finally getting the FISA information he requested back in August, and the IG readying to drop his report on 1/15.

John Soloman writes for “Politico”, and he has broken some important stuff over the years, and the last several weeks.

He thinks that there are some very good, strong investigations going on, and we’ll be hearing about them in the near future.

Remember, if you don’t see it in the press, that NEVER means it isn’t happening.

Obama spying on the Republican candidate and Americans; DNC denying the vote; Clinton colluding with foreign services and Kiev to influence the election… The Republicans have a choice, not a Choice, to make.

Will they continue the witch hunt? Or will they expose the Obama/Clinton/DNC cover-up.

No. If McConnell is the chokepoint then we take him out.

“No. If McConnell is the chokepoint then we take him out.”

I would like that too, but things aren’t looking bright. I expect that 4-6 new GOP Senators will be elected in 2018, and they’ll probably be squishes; more foot soldiers for McConnell.

If things are going well for Trump by 2020 (when McConnell is up for re-election), McConnell will tie himself to Trump. Trump will allow him to, because McConnell is useful to Trump and Trump is only interested in #winning as long as it boosts his brand. Selling out voters by backing McConnell is a no-brainer for Trump, just as it was when he endorsed McCain.

I think you’ll see this behavior on display much earlier, though, as Trump does outrageous things like endorsing (or nearly so) super-squishes like Mitt Romney. You know, Mitt Romney: the guy Trump supporters said embodied the Loser ethos of the GOP, cuck establishment.
It’ll be a lot like the Von Ribbentrop/Molotov pact, that way.

No supporters have ever been able to explain how electing McCain was a good thing, just as they will ignore it when Romney is elected. They refuse to see things they don’t want to see.