“Why did the chicken cross the road? – Because Anderson Cooper kicked it off the New Year’s Eve show.” 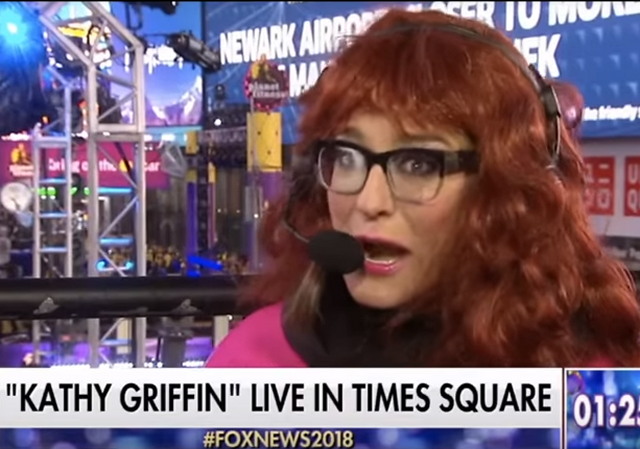 Comedian Kathy Griffin lost her gig as the New Year’s Eve sidekick for Anderson Cooper when she chose to hold up Trump’s severed head during a photo shoot last year.

On FOX News, hosts Jesse Watters and Kennedy had some fun at Griffin and CNN’s expense. I had friends over on New Year’s Eve and we flipped back and forth between various networks. Somehow, I missed the funniest segment of the night.

Ken Meyer of Mediaite has the details:

Kathy Griffin did not appear on CNN’s New Years Eve broadcast last night, though it seems Fox News was preoccupied enough by her absence that they tried to fill the void.

Jesse Watters hosted the network’s celebratory broadcast, though at one point in the show, his co-host Kennedy was nowhere to be seen. Instead, Watters welcomed “Griffin” to the program, and they exchanged banter about everything from her comedy career to the controversial photoshoot that caused CNN to part ways with her.

“I’m a fixture in Times Square. Nothing is going to keep me from that hassle,” said “Griffin.” When Watters brought up her firing, “Griffin” responded “I was just trying to get ahead.”

Kaitlin Menza of Esquire has more:

Of course, Fox News couldn’t resist a dig at their rival network and its besmirched former personality. In his own broadcast from New York City, host Jesse Watters brought out a surprise guest: “Kathy Griffin.” Also known as another Fox host, Kennedy, in a shiny red wig.

Kennedy, whom you might remember from her years as an MTV VJ, turned in a shockingly solid Griffin impersonation, from the high-volume gravelly squawk of her voice to the long pauses after jokes. As for those jokes, though…

“Why did the chicken cross the road?” she asked in another. “Because Anderson Cooper kicked it off the New Year’s Eve show.”

CNN replaced Kathy Griffin with Andy Cohen, a celebrity gossip gadfly from the Bravo network. The chemistry between Cohen and Cooper fell a little flat for some viewers.

Reviews Are In, and People Aren’t Impressed With Andy Cohen on CNN’s NYE Telecast

The reviews are in and people aren’t happy. Viewers took to social media to vocalize that they weren’t impressed at all with Andy Cohen’s appearance alongside his bestie Anderson Cooper on CNN’s NYE telecast.

Cohen, rather controversially replaced Kathy Griffin after CNN decided to hack the female comic because of her Trump photo faux pas.

Here’s what people had to say:

Considering they are best friends, Anderson Cooper and Andy Cohen have absolutely zero chemistry. Anderson seems like he wants to be anywhere but Times Square. #CNNNYE – Sidney Joel Stokes

Someone please bring back @kathygriffin to #CNNNYE! This shit is boring AF & I’m sick of hearing Andy promote the damn housewives. Sorry, but Kathy & Anderson were perfection.- Sabina M.

Jesse Watters and Kennedy definitely seemed to be having a better time.

Andy Cohen, never heard of him.
We were flipping stations and caught part of CNN, right when he was stating that Anderson’s eyes never looked so blue. I figured he was the boyfriend.
Put down the tequila, boys.

I missed this, glad you posted it! You’re right, that impersonation was hilarious – but what an awful script! Hire a writer, guys!!!!

Reminds me of the apocryphal story of the actor on his death bed, after a visitor said sympathetically “this must be hard for you”, who replied “Dying is easy. Comedy is hard!”

Thanks for reminding me of why we cut the cord.

But CNN viewers got to see Don Lemon “sweetly” kiss his white boyfriend as their balls dropped.

I’m not clear. Which bothers you worse – two men or different races??

race bait much, do we?

I am a random watcher of cable news. But nearly every time I tune into FNC – it is usually The Five or Tucker Carlson – there is some story about CNN or some negative comment made against that network. FNC is going all in on it, which if fine. CNN is just a parody these days.

It was especially terrific the way people on FNC ridiculed CNN for their bizarre obsession with Trump and Diet Coke. It was hilarious but well earned. How petty can CNN be?

Wow … I haven’t turned the TV on in so long, I’ve forgotten where I left it.

We are the Banapple – The Cannabis News Network

Blaming Fox is like trying to blame the school for educating you. Kathy brought this upon herself and she and she alone bears that downfall. And this is a good lesson too, think before you do something stupid where it goes viral. Silence the tongue when you know it may bring trouble. Otherwise, STFU and think before speaking.