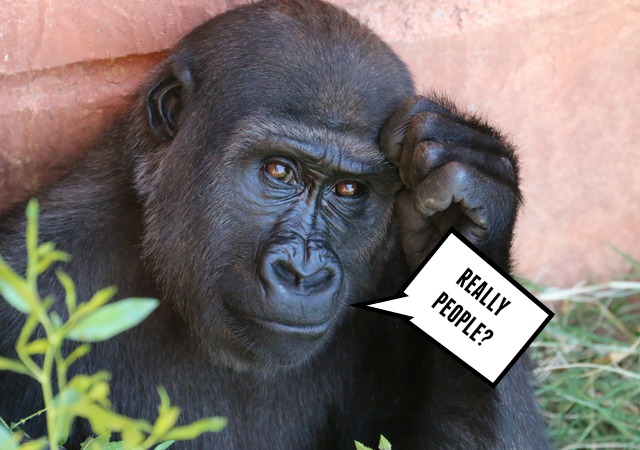 Friday, the internet granted us a fabulous piece of “fooled ya” lore: a fake excerpt from Michael Wolff’s “Fire and Fury”, the book that sparked the flame war between now ostracized former White House aide Steve Bannon and President Trump.

A clever fellow created a fake excerpt from “Fire and Furry” explaining how Trump demanded his own personal gorilla channel, which he watched for 17 hours on end.

Wow, this extract from Wolff’s book is a shocking insight into Trump’s mind: pic.twitter.com/1ZecclggSa

— the gorilla channel thing is a joke (@pixelatedboat) January 5, 2018

Regardless of your thoughts about Trump, the parody is hilarious and is obviously a joke…buuuuut, not everyone got the joke.

I’d say at least half of the people responding to that hilarious Wolff “gorilla channel” parody can’t see that it’s parody.

Far too many willingly believe the president watches gorillas all day long.

Scott Dworkin actually believes that the hilarious "The Gorilla Channel" excerpt from Wolff's latest piece of fiction is real.

This is how desperate liberals have become.

He deleted this tweet, but the internet is forever. pic.twitter.com/6PyY46UmKv

This is my favorite part of Wolff's book so far. Amazing for what it says about this administration! (It's worse than you think!!). So amazing, I can barely even believe it. It's *literally* incredible@Pixelatedboat caught it first (he's a quicker reader than I). Reproducing: pic.twitter.com/qtOaNDxnx2

Deleted, but the internet is forever: 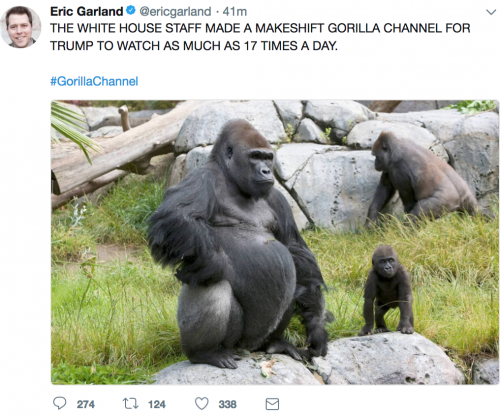 This is scarier than shit knowing this human being has the capability to use nuclear weapons. I shuddered and got chills. OMG OMG OMG

He fucking has this on tape?? Like, literally someone on the White House staff told him this while being recorded? There are pictures of the rig? He has the engineers or programmers on record corroborating this? That would be absolutely amazing!

i can't believe this is not a parody

TRUMP has put @TheOnion out of business.

I blame modern medicine and advances in psychotropic drugs. In an earlier age most of these people would be institutionalized, instead they are functional Democrats, two steps away from a mental breakdown.

I totally agree, just a little two steps away…. My question is; “How can we trigger those last two steps and remove them from the voting public?”

“Harambe approves of this message!”

It’s hysterical until you remember that the GOPe was routinely surrendering gracefully to these morons. Until Trump.

And yet Obamacare still isn’t repealed.

Given that, and the fact that we continually (collectively, that is) voted them into office or tolerated the crying boehners until 2016, who is worse: the loons of the left, or likes of ‘us’ who vote GOPe?

Crazy people at least have an excuse. What was ours? And what continues to be the excuse of any supporter of the GOPe, or conservative detractor of Donald Trump?

Not so simple. At least the GOP has to pretend.

Yes, all great fun … though I really think the better part of wisdom is—

Psychosis on a massive level

I want a Gorilla Channel!!! Heck, it would have twice the intellectual content of MSNBC and CNN combined.

The Gorilla Evening News with Harambe.

NOW we know why DoJ is going after lawless dope smokers! How else can such stupidity be believed other than through ‘Reefer Madness’? Anyway, even if it was true in the past, Trump is to busy with global warming so that snow is dumped on New England for supporting St. Hillary – no time for gorilla’s.

I was watching in real time as some wag on The_Donald created this. Took all of 5 minutes, and most of that time was typing…

At The_Donald, it was immediately called out as a troll (that is, a joke).

I’m old enough to remember when leftists were obsessed with making GW Bush chimp memes which flooded the internet.

The fact these TDS tools swallowed this nonsense faster than a maggot feasting on dog poop is not surprising.

Even to the professionally clueless, “broadcast into Trump’s bedroom from a hastily-constructed transmission tower on the South Lawn” should have been the giveaway. The boutique channels are cable, not broadcast. Broadcast is flint-knives-and-bearskins stuff.

You know I’ve been saying for a while that the media is so willing to believe ANYTHING about Trump because something like this is something that Hillary Clinton would ACTUALLY do.

Not gorillas, but the fact that she would make a ludicrous demand and her staff would go to insane lengths to actually cater to her whim rather than just tell her ‘no’.

Sessions is on his way out, and indictments against the klintons are on their way in.

Look for more ‘noise:’ it’s like the noise the Wizard of Oz started making when Toto pulled back the curtain on him.

Look for GOPe rats to swim from their sinking ship. Drown them while we can.

LOL, you can bet the nevertrumpers were salivating…

This only goes to underscore that Democrats have to live with the fact that Hillary Diane Rodham Clinton, former law partner at the Rose Law firm, Mystic Spirit of Fort Darcy Park, former First Lady of the United States, former US Senator from the Empire State, former Secretary of State and the most qualified candidate for President in the history of the EVAH, was beaten by this “illiterate idiot” from Queens (and Gorilla Channel watcher).

#TheCriminalHillaryClinton is such a pathetic LOSER

I can understand the Democrats psychosis.
(Be sure to take your meds)

The whole story is in the comments.

I knew something like this was going to happen. The intelligence level of the average American has fallen so far…. This is all likely due from fluoride in the water, chem trails, global warming…. or even some combination. (sarc)
>
Bottom line is that you cannot fix stupid.

You mean to tell me that the Gorilla channel is a fake? But, I just sent $1000 in bitcoin to Molo N’Gomo in Nigeria to have it streamed to my computer. I was hoping that watching it would turn me into an alpha male. *sigh*

It seems the guys running the FBI leak investigation have a good sense of humor.