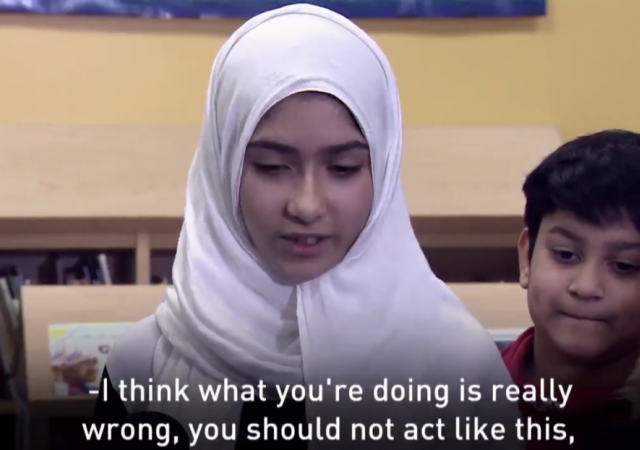 Friday, eleven-year-old Khawlah Noman claimed that while she was walking to her school with her ten-year-old brother, a scissor-wielding Asian man in his 20s used scissors in repeated attempts to cut her hijab.

Once she got to school, she told school officials who then escalated the complaint up the chain until the girl was sitting in front of a bevy of news cameras and Canada’s Prime Minister was issuing statements on the incident.

“I felt really scared and confused.”

An 11-year-old Toronto girl says a man approached her while she was walking to school on Friday morning and attempted twice to cut off her hijab with scissors. pic.twitter.com/v8x12wZaht

“This is something that we need to take very, very, very seriously and the pattern or trend lines that we’re seeing is … one of those warning signs about intolerance,” he said.

By Monday, officials hade ruled the story “fake news” and closed the investigation:

On Monday, police said their investigation concluded with no charges laid and no consequences for the girl.

“These allegations were extremely serious and not surprisingly, they received national and international attention,” police spokesman Mark Pugash said in an interview. “We investigated, we put together a significant amount of evidence and we came to the conclusion that what was described did not happen.”

Pugash said police don’t know how the story escalated. He stressed that it’s “very unusual” for someone to make such false allegations and said he hopes it will not discourage others from coming forward.

Canadian Muslim organizations expressed similar concerns, saying they feared others who experience hate crimes may be reluctant to report them out of worry that they will not be believed.

What in the world prompted this little girl to make such allegations? Was she put up to it? Was she just being an eleven-year-old girl, creating a dramatic story, not realizing how quickly her story would spiral out of control?

Likely? Textbook fake crime to perpetuate victimhood. No hate crime exists? Make one up. From the Daily Caller (Nov 2016):

To gain power, totalitarian movements always portray themselves as victims. And while they are in the process of abusing, they cry in front of the world posing as the abused. They stage “hate-crime” attacks against themselves because hate crimes are their political and cultural capital. When those hate-crimes don’t exist, they must be invented.

We are witnessing precisely this phenomenon at this very moment in regards to the myriad hoax “hate-crimes” that anti-Trump forces are manufacturing out of thin air and blaming on Trump supporters. The media are bolstering the entire hallucination process, with CNN leading the way.

Central to the whole narrative is the supposed “Islamophobic” anti-Muslim crime-wave sweeping the nation. The rumors spread and the media regurgitates the lies without any evidence to back them up. And then, after the hoaxes are debunked one by one, the media is, by that time, bored and no longer interested.

The latest “Islamophobia” counterfeit involves a Muslim student at the University of Louisiana at Lafayette (ULL). The Muslima alleged that her hijab and wallet were stolen by two white Trump supporters who were shouting racial slurs. The woman’s accusation incensed leftists and Muslims across the nation and the world, prompting the ACLU of Louisiana to issue a statement denouncing both the incident and, of course, Donald Trump. The investigation into the incident involved several law enforcement agencies, including the FBI. The Washington Post, New York Times and CNN, meanwhile, ate the story up.

But what happened to this Muslima’s story under tough police questioning? Well, the ULL student eventually broke down and admitted to police that she had fabricated the entire thing. By that time, of course, the media wasn’t too interested in such an innocuous little detail.

The whole post is worth a read, but you get the picture.

That said, using children as political tools will always be the most disgusting kind of exploitation.

That “religion of pieces” does a lot of those hoaxes, and abuse/use their women for them.

They’re also used to “bait” to try and create incidences.

Just ask the Israeli about that…..

TheFineReport.com in reply to notamemberofanyorganizedpolicital. | January 16, 2018 at 7:46 pm

Her punishment? — Stab her with a scissors. Twice.

I now always assume these stories are hoaxes until proven otherwise. At that point, I revert to cautiously skeptical.

She’s a perfect match for Clockmed.

And he had bangs. Apparently. Or the imaginary him did. http://nationalpost.com/news/toronto/until-it-was-found-to-be-a-hoax-toronto-girls-hijab-made-news-not-the-attack-on-her

” possum-eating, racoon-hunting, sister-dating rednecks who drive monster trucks” are hard to find in Toronto and it was the wrong neighbourhood to try finding a Jew to blame 🙂

It takes a sense of humor to spend nine months at sea.

It’s always hard to find a Jew to blame if you take an honest look at the numbers.

Muslims can find Jews at fault for the murder of penguins in Antarctica. If it rains on your Birthday, Jews. They sure get around.

“If it rains on your Birthday, Jews”

Yes it was. Or maybe not. I don’t know anymore.

At a certain point you just have laugh a let go.

Wasn’t Hitler the abused victim when he was imprisoned and wrote “Mein Kampf”?

“A 3rd Battalion 3rd Marines India Company Corpsman in full PPE signals a Helo into a LZ in Afganistan by shuffling with Christmas lights wrapped around him. The pilots loved it.”

Thank G-d for the Devil Docs.

OK. This one works.
https://www.youtube.com/watch?v=O2MTZ3VpyrY

Because, racist! And if you don’t agree me you’re obviously a racist. Rasticy racist racists!

I am glad Justin Trudeau emphasized the seriousness of this (non)incident by adding that third “very.”

Apparently the link I archived doesn’t work anymore. But it was funny as all get out.

You’re just going to have to believe me on this one.

Did she fabricate the story or was she merely the teller of the fabricated story conjured up by another?

The Koran teaches Muslims to lie to advance the cause of Islam. When a Muslim publicly claims some offense, the claim should be met with mockery and jeering in the absence of independent video proof. Why? Muslims lie. Muslims want to force Western societies into compliance with sharia law. To do this, they will lie. So, after jeering and mockery, the lying Muslim should be charged, always, for filing a false report. That’s the only way to stop them from doing lying to advance Islam—mock, jeer, name them, and slap a false report charge with a hefty fine.

I love how all the reporting on this house has been “fake but accurate”, ie. Even though she made it up this is a great example of the bigotry that Muslims face.

Similar to BLM – Brown wasn’t executed in the streets, Gray wasn’t taken for a rough ride, Scott was wielding a gun not a book.. but their story still highlight police brutality against blacks, somehow.

“This is something that we need to take very, very, very seriously …”

Thank goodness for Canadians … without them, Americans would be the biggest patsies in the western hemisphere.

Just not so very, very, very seriously that the perpetrator of the hoax should suffer consequences.

And who is the biggest potential victim of this liar? The next Muslim who is actually attacked. But what is the Muslim community’s response?

Canadian Muslim organizations expressed similar concerns, saying they feared others who experience hate crimes may be reluctant to report them out of worry that they will not be believed.

Why would a Muslim fear a report of a hate crime will go unbelieved? Because of false reports like this one, yet not a word discouraging false reporting of hate crimes!

So, she doesn’t even have a detention for her behavior?
Wow.

“…The Koran teaches Muslims to lie to advance the cause of Islam. When a Muslim publicly claims some offense, the claim should be met with mockery and jeering in the absence of independent video proof. Why? Muslims lie…”

The various forms of lying are collectively known as “outwittings.”

Taqqiya is the most famous. But it irritates me that non-Muslims think that Allah only permitted “concealment.” There’s also Tuariya, or deceit by double meaning, Kitman or lying by omission, and Maruna or setting aside. As in, going out for drinks and lap dances before flying a plane into the WTC.

I’m pretty sure I’m leaving out a few Islamic divinely ordained forms of lying out of this list.

“Allah is the best of deceivers.” Qur’an 3:54 and 8:30, most unlike the Christians’ 9th Commandment “Thou shall not give false testimony against your neighbor.”

Allah is the best of those that do makr. Which is deceit.

I sometimes feel alone in this lonely, lonely world. And along comes you.

This is very common in the Trudeau alt-reality liberal idiot universe. Until they personally become a victim of the violence they deny.

Sorry but you don’t just walk this back and say aw shucks because it’s a child.

What if the child had continued to dig a hole for herself and pointed blame at some innocent person to cover her tracks? That’s a whole undeserved world of hurt for a very serious matter, and it’s not like that kind of accusation has never happened before (with an innocent bystander flagged by the alleged victim to avoid being caught in the lie).

The usual suspects were so quick to pounce on the virtue signaling that they would have left this hypothetical innocent bystander in their wake and trampled him with their high horse.

This has to be one of the least irritating things Milhouse has ever said.

and said he hopes it will not discourage others from coming forward.

That said, using children as political tools will always be the most disgusting kind of exploitation.

And since there is absolutely no downside, expect it to continue.

Grumman Iron works. Works for me.

So nice I did it twice. Just to make sure.

This is probably the t-shirt I shouldn’t wear.

I could word the mighty, mighty AWG-9 like no ones business.

Still “Islamophobia” is a big worry in Canada and so the National Council of Canadian Muslims (NCCM, formerly known as CAIR CAN)has asked PM Justin Trudeau to designate Jan 29 as … wait for it…

Maybe someday it’ll be a holiday, with celebratory beheadings of effigies of Robert Spencer & Pamela Geller, and of course D. Trump.

Every muslim in Canada is reporting “hate crimes”. I didn’t know Canadians were so Islamophobic, LMAO!