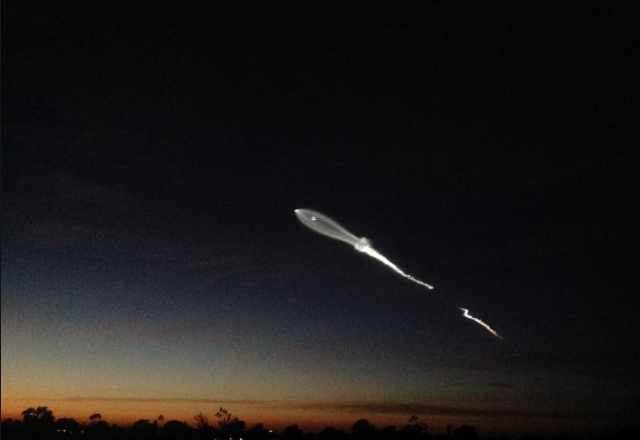 Forget UFO’s!  On Friday night, SpaceX launched a satellite that lit the evening sky over Southern California, dazzling and amazing spectators in California and Arizona.

SpaceX’s Falcon 9 rocket, launched from Vandenberg Air Force Base at 5:27 p.m., was carrying 10 satellites to low-Earth orbit. The satellites will be part of a constellation operated by Iridium Communications. All 10 satellites successfully deployed, with the last one deploying about 1 hour and 12 minutes after liftoff.

The rocket’s first stage was previously used during a mission in June.

Officials had warned the launch could be seen across Southern California and beyond. But on the day before the holiday weekend, the streaks of light against the blue sky were something to behold.

Many people pulled over their cars to take photos and videos of the sight.

The spectacular show was a media sensation:

Here’s the time-lapse of tonight’s rocket launch from @SpaceX … it launched in California… but everyone in #PHX saw it #SpaceX #spacex pic.twitter.com/j0ny99u94a

WOW!!! The view from LA is amazing!!!! People are going to freak out #spacex #IridiumNEXT pic.twitter.com/0mznMRvDKI

Many watchers were grateful the launch did not originate from North Korea, aliens, or both.

Just saw the spacex launch. Thankful for twitter because I thought it was aliens or North Korea. pic.twitter.com/GNhde97S8y

There are always lessons to be learned after any test. Perhaps the most important one in this case is to publicize the launch before it occurs.

As this is the Christmas season, the mesmerizing display brought some holiday comments.

And on the 1st day of Christmas, Elon Musk brought to me: a SpaceX rocket launch live from Santa Barbara. Wow!!! pic.twitter.com/ccWE37ZIIe

The goal of the SpaceX program is to make the components of the launch reusable, to reduce costs and the time between take-offs.

SpaceX has now re-used Falcon 9 first stages on five separate missions, all of which launched this year. The company has also landed Falcon 9 boosters 20 times to date…

SpaceX also launched previously flown Dragon cargo capsules on robotic resupply runs to the International Space Station twice in 2017. The second such flight, which lifted off on Dec. 15, featured a used Falcon 9 first stage. SpaceX had never before mounted an orbital mission with a pre-flown rocket and a pre-flown spacecraft.

Such re-use is key to slashing the cost of spaceflight, which will open the heavens to exploration, SpaceX founder and CEO Elon Musk has stressed. Indeed, complete reusability is a central feature of the BFR rocket-spaceship combo that SpaceX is developing to help humanity settle Mars.

SpaceX has now lofted 40 Iridium Next satellites across four different launches, with all of them happening this year. The company will fly four more missions for Iridium in 2018 to put 35 additional spacecraft in orbit, filling out the $3 billion Iridium Next constellation.

It will certainly be interesting to see the kind of show SpaceX may be able to produce at the end of 2018!

The expanding cloud is the exhaust expanding as it goes higher and the atmosphereic pressure declines.

Then the second stage which has an engine that much more greatly expands ignited. Then within that cloud, the first stage did a reentry burn, but they started it spinning on purpose to see if they could recover from a spin.

You can even see two more lights as the fairings seperate and start trying to reenter safely.

Show the picture of the recovery ship for the fairings, with its Doctor Octopus arms! This ain’t your granddads sci fi, this is real life baby!

Christmas wish: Jerry Brown is on board.

No use launching something already in lunar orbit.

A great visual reminder that we are not all earthbound (spelled NASA). This is reality overtaking sci-fi… Rocky Jones Space Ranger, a nod to Ray Bradbury and a sideways nod to Weyland. Admittedly it is easier going up than down…. but space-time and gravitational warps don’t happen big time in the depths of the Marianas Trench. We really can’t get many places yet but we can begin to break the bonds of earth’s gravity again. It may be a stroll about the neighborhood… but it is a re-start to where we were abruptly cut off after Apollo 17.

When something important needs done, you can always look right past the government to the private sector to get it done right and for a fraction of the cost.