The second family has had a rough go lately.

Prior to being elected, they lost their beloved beagle.

When they moved to DC after the election, their cats Oreo and Pickle and bunny Marlon Bundo moved with them.

This summer, the Pences lost Oreo.

Rest in peace Oreo. You touched a lot of hearts in your little life. Our family will miss you very much. pic.twitter.com/0Ar9Sr5kpz

And this week, Pickle made the great journey across the Rainbow Bridge.

We will all miss Pickle, our very chatty, sweet kitty of 16 years. pic.twitter.com/X4xx8nH6vN

Anyone who’s lost a pet knows the grief and devastation of bidding a furry family member adieu. And yet, this is the headline Newsweek ran: 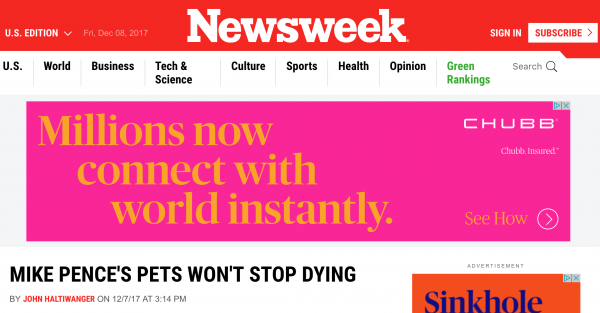 To their credit, the post itself is not as nasty as the headline, but really? The Vice Presidents pets ‘won’t stop dying’?

As if that were not tacky enough, Newsweek’s related articles: 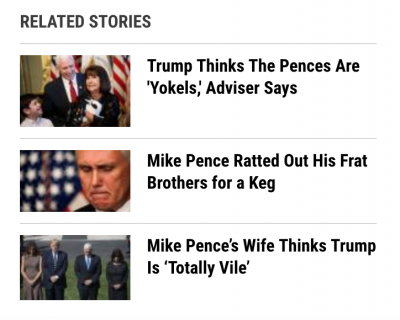 It’s sad that even the death of a beloved pet is met with vitriol from major news publications.

It’s not about class: these are really sick people, bent on dehumanizing the rest of us.

The wildest thing is that they have no idea of the consequences of their end goal is.

This is what happens when religious life is ridiculed, lost and leftists handlers move-in to replace it with government ‘gods.’

We are literally the enemy of these lost, angry people.

The irony is their real enemies are the people who led them astray.

Right Lindsay Vonn Moron? (Imagine? At the end of her athletic career, Vonn Moron sells out her country to try and get a job in hollywood. Does anyone really think she came up with her Trump-hate crap her own?)

Newsweek or The Onion?

when I was in my early twenties, this rag was a news weekly, now it’s just a news weakly.

Newsweek is still a thing? And you tell me tens of people read it?

The same tens of people who watch CNN.

A distraction by the writers from their assignments of creating fictitious accounts of discord between the Trumps and Pences.
As if we did not see Melania and Mrs Pence have a wonderful trip to Texas this week, clearly comfortable around each other and laughing over lunch at Whataburger.

The dead cat is still more alive than Newsweek.

I absolutely agree, Matt. Leslie, thanks for the smile, my clever friend.

Out of the park, grandslam Leslie.

I follow Marlon Bundo on Twitter and it’s a great diversion from the hatred I find directed at our President and Vice-President. Saying goodbye to a pet is hard, and for Newsweek to be so cruel is unthinkable. Somethings gotta give.

People who worked for Newsweek are rolling in their graves. When Harmon paid $1 for it, he was cheated.

Death means so little to liberals. So many of them die by overdosing, AIDS, suicide, homicide by jealous same sex lovers, ignoring warnings, dying while committing felonies, stolen car crashes, ignoring the police, threatening to tell what they know about democrat politicians, Darwin Awards try outs, drunk driving, urinating on electric fences, going to dangerous countries, going into dangerous hoods, hanging out with felons, dealing with drugs, gang involvement, habitually being in the wrong place at the wrong time….

It’s unsurprising that Spielberg is coming out with a film that pays homage to WaPo’s glory days — almost 50 years ago — because the paper has become a joke of late, just another water-carrying propaganda rag that gleefully attempts to advance the Dumb-o-crat agenda while tearing down political opposition. Newsweek, which I believe is owned by Jeff Bezos, as well, has descended to similar levels of partisan infantilism and vindictiveness.

Infuriating. Those of us who have beloved pets feel great pain when they leave us. The Pences loved their animals. For this “news” magazine to make fun of their grief is beyond cruel.