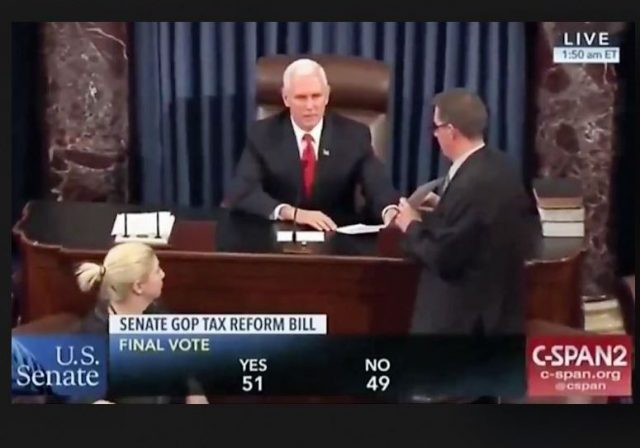 The Senate voted early this morning to pass a Tax Reform bill. That bill is not yet law, because differences with the Tax Reform bill passed by the House need to be worked out in conference.

Nonetheless, this procedural step forward was considered a big win for Trump and Republicans after Senate Republicans could not pass even a weak repeal and replace of Obamacare because of defections. But this time the caucus held together with just one defection, Bob Corker.

How have liberals reacted?

Let’s see if I can put this diplomatically. They totally lost their s–t.

America died tonight. Economic suicide adopted to feed the insatiable greed of donors, who have been refusing to dole out $ to GOP until they got their tax cuts. Voters fooled by propaganda and tribal hatred.

Millenials: move away if you can. USA is over. We killed it.

The Republican Party is the enemy of the American people. The Senate just passed the Trump Tax Increase, 1:50am, enriching the 1% & concentrating wealth in the hands of the few. Capitalism & Fascism. The coup is underway. Make no mistake about it. EVERYONE OFF THE BENCH! 11/6/18!

While you were sleeping snug in your beds, DEMOCRACY DIED

American Democracy died last night, on the floor of the United States Senate, while We The People slept snug in our beds.#TaxScamBill

#GOP just passed their #TaxScamBill in the Senate marking December 2, 2017 as the day democracy died in America #LetThemEatCake #FrenchRevolution

Not sure a televised vote is “darkness,” but it was DEATH nonetheless

And that's it. By a vote of 51-49, taken at nearly 2 a.m. on a Saturday morning, the U.S. Senate has just voted to gut the U.S. tax code, with implications for every American.
A bunch of old white men are applauding as democracy dies in the darkness. pic.twitter.com/UAPFzQyTNg

This may be redundant since America died, but the SENATE DIED too.

The Senate, the greatest deliberative body on earth, has died. No mid-road solutions, no compromise or gentle persuasion, it’s now my way or no way. Truly sickening.

And AMERICAN ACADEMIA was killed.

The Senate killed American academia and made sure that only wealthy white people are able to afford PhDs in all areas.

In this post-nuclear winter, THERE IS NO AMERICA

Is there any going back after this #TaxBillScam? To America? Does it matter now if Trump is impeached? There’s no America now. Not the one we knew. Sorry, feeling real despair this morning

Killed last night? No, they dug up the moldering body of bipartisanship, broke up the skeleton, threw the rest on a bonfire of the last remnants of Senate norms and protocols. Waving the bones they danced around the fire grunting their mantras – trickle down, starve the beast.

The Senate has just killed the Middle Class in America. There….I fixed it for you.
Beware November 6, 2018. We will remember.

Let’s clarify that, ALL AMERICAN FAMILIES were killed by this vote.

This all reminds me of former Congressman Alan Grayson who, arguing against Republican alternatives to Obamacare, declared that Republicans want people to

notamemberofanyorganizedpolicital in reply to The Friendly Grizzly. | December 4, 2017 at 11:27 am

There go the Democrats and Alan Grayson self-projecting their evil traits again!

Drama queens? Using today’s language, they are the epitome of “snowflakes”.

They’re nuts. Completely, totally, out of their minds.

To be fair: they live in an information bubble, and many of them honestly cannot imagine a world exists outside of sludge delivered to them by msnbc, CNN and the ny times. For them to peek outside the bubble and acknowledge reality would be an enormous hit to their fragile egos. (Arrogant & ignorant, remember.)

So, they live in their fairyland, feel superior to the rest of us hicks, and inadvertently sell-out their way of life.

They act as if the country can’t survive without an income tax administered their way. It never occurs to them that this country got along just fine for a long time with no income tax at all. Do they even know that?

These same ignorant cultists make fun of people who believe in noah’s ark. What irony.

notamemberofanyorganizedpolicital in reply to TheFineReport.com. | December 4, 2017 at 11:29 am

Got along rather well without the Seventeenth and Nineteenth Amendments, too.

And of course the Eighteenth was a disaster, but we all know that already.

Exactly. America had roads, schools, railroads, and could raise an Army without ever having an income tax.

The Republic is finished.

The left’s version of a “republic” is a fascist cult populated by narcissistic ignoramuses, and of course, pervs and child molesters as its spokemen/spokewomen/spokeits and propagandists.

If this means the vermin still subsisting in the spillage of the obama/jarrett/klinton sewer has been fatally wounded, that’s great news.

I was amazed at the two completely at odds statements that the Dems spewed out during this:

A) We had no idea what is in here, because we barely got the gazillion page document, half-written in crayon, five seconds before the vote was scheduled.

B) Look at this detailed list of twenty-seven specific items that we dislike that are in this bill.

Wait!! What? Jerry Brown (Moonbeam) says “…irreparable damage to our once proud Republican Party.” Our?

He’s building a billion dollar railroad to nowhere, wants to put water tunnels under a river delta, lets the existing dams deteriorate (and the one they “fixed” is already breaking), and signed off on a sanctuary state… And he talks about damage to the other guy’s party?

At least all the right people seem to be upset.

At some point, you just have to write off the other side as a bunch of liars or loons. For the sake of your own sanity.

OK. Then what? They still have the vote, and in way too many areas they have complete control of the voting system.

Can you actually live in a sane society with lunatics and liars?

Then what?
Then you go about your business, ignoring all the complaints from the other side. None of them are good faith arguments.
Run over them roughshod, like they deserve.

But destroy their ability to create clones of themselves in our schools.

The Senate bill took a baby step toward that goal by exempting colleges that don’t accept federal funding (e.g. Hillsdale) from a new tax on university endowments.

notamemberofanyorganizedpolicital in reply to snopercod. | December 4, 2017 at 11:31 am

Taxing endowments would be a good thing.

Well, they’re right. The nascent People’s Soviet Socialist Worker’s Parasite’s Paradise of America was strangled in its crib. But that happened in November last year, not last night.

I can certainly understand why they’re distraught. It seemed so close …

Not that the Republican tax bill is anything to get excited about. It’s basically crap. But as a shot across through the bows of the Racist/Corruptocrat/ControlFreak/Sexist/Socialist/Fascist/Pervert Axis, it’s pretty good.

The Republican tax bill was significant for a few things, but most significantly was that Donald Trump broke the GOPe logjam in Congress. He now has inertia.

A major highlight of the bill is cutting the federal deduction for leftist state high taxes. What this means is a tax increase for Californians, NYers, etc. of about 10%! NOW, let’s see what these idiots have to say about the freaks they have elected to govern them. Besides ending the barrycare mandate, this could prove to be a giant catalyst of change.

Now, imagine the Trump agenda after we dump mconnell and ryan.

I’m confused about the New York thing. My kids live in NYC, and the tax calculator says they will not be adversely affected. In fact, it says their taxes will be lower.

Why do you say these bills are crap? The Tax Foundation estimates that these changes will increase wages by almost 3%, increase GDP, and add hundreds of thousands of jobs. The Senate bill will destroy Obamacare. The decrease in the Corporate tax rate will help make America competitive again. I don’t understand what you are upset about here.

Oh, I forgot. The Senate bill opens up ANWR for drilling.

I’m not upset, I’m just pointing out that for all the noise about “reform” it’s basically just rearranging the deck chairs. Business as usual. Historically, most tax “reforms” have been net tax increases. These do nothing about America’s severe disadvantages in global competitiveness. Our tax structure requires the foreign consumer to pay for some of the bloated expenses of the American government, which raises prices, and American competitiveness takes a hit; not because the American worker demands too much money, but because the American government does.

People tend to think that taxes which hit someone else are OK. Unfortunately, not so; they hurt us all. The costs are indirect and not obvious to casual inspection, but they’re real, and getting worse.

Haha lol, did the left forget how Obamacare got passed? The left’s hipocracy has no limit!

Thank goodness democracy is dead and our republic lives on.

I’m surprised that Pelosi hasn’t said that “We need to pass this bill to find out what’s in it”. But it’s funny that when it’s a Repub bill they go ahead and blast it without knowing anything about what’s in it! They were whining about the loss of the state income tax deduction but it only affects the upper-income people who itemize. This will be the first time the Dems have ever had any concern for that group. Sometimes hearing and seeing the Dems in action is like reading a five-year-old Time magazine in a doctor’s office!

One of the reasons why I hate the Democrats so much is because the “intellectuals” who support them are so dishonest. Every single academic (not just Gruber) and writer for The New Republic, The New Yorker, The Atlantic, and NYT and WaPo op-eds KNEW, without a doubt, they were lying about Obamacare. You can’t have: universal coverage; cover pre-existing illnesses; and cover the most minor, basic things that should be paid out of pocket (like birth control pills) and expect premiums to decline. It’s just retarded to even pretend it.

Put it in perspective using actual data. In the fiscal year just ended, the federal government confiscated about $3.4 TRILLION from Americans for the central planners to sprinkle around however they choose. That wasn’t enough, so they borrowed more and spent about $4 TRILLION.

This tax cut amounts of $150 BILLION of tax relief next year.

These morons want you to believe the government confiscating $32.5 TRILLION over ten years rather than $34 TRILLION is the difference between dystonian hellscape America and Utopian Wonderland America.

As much as Republican anger me and make me hate them sometimes, Democrats should never be allowed to have power ever again.

The GOP killed bipartisanship? Then what was the Obamacare vote, a clinic in Democrat cooperation?

I really hate the Senate version of this bill, because it makes permanent tax increases like eliminating certain deductions, while making the tax breaks like lower brackets temporary.

notamemberofanyorganizedpolicital in reply to randian. | December 4, 2017 at 12:05 pm

But it is a starting point – much more than the Dictatorship Party would every do.