What is it about the UN that “allows the representative of the Assad government to lecture the United States for moving its embassy?” 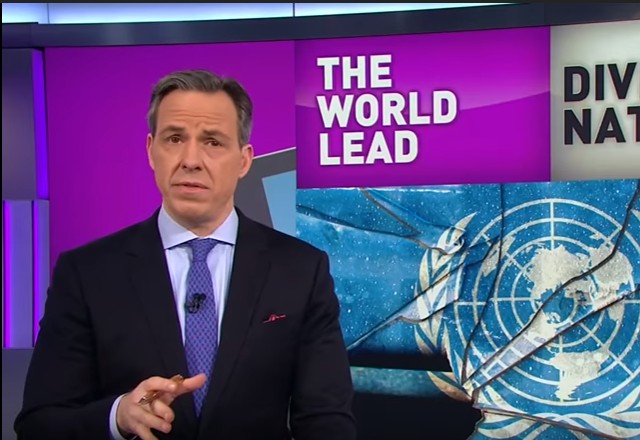 Jake Tapper of CNN is one of the few mainstream media stars who is willing to occasionally question his industry’s assumption and practice journalism as opposed to simply accepting predetermined narratives.

On Thursday he continued this tradition by ripping Wednesday’s United Nations General Assembly vote rejecting President Donald Trump’s recognition of Jerusalem as capital of Israel, noting with a good deal of understatement that the critics of the United States had “questionable records or their own.”

I don’t mean to overlook Nikki Haley’s excellent speech berating the U.N. and many of our fickle allies and the institution that wouldn’t exist without the generous donations of the U.S., but Tapper can’t be classified as an ally or apologist of the Trump administration.

While much of mainstream media focused on the lopsided nature of the vote and that it portended a loss for Trump. For example The New York Times headline read, Defying Trump, U.N. General Assembly Condemns U.S. Decree on Jerusalem. The lead paragraph of the article told us, “A lopsided majority of United Nations members rebuked the United States on Thursday, denouncing its decision to recognize Jerusalem as Israel’s capital and ignoring President Trump’s threats to retaliate by cutting aid to countries voting against it.”

Of course, as Prof Jacobson pointed out, this does call for a response from the United States. But Tapper, unlike, the Times, looked at the quality of those opposing the U.S., not the quantity. From Tapper’s monologue:

The U.S. imperils global peace says the representative of Venezuela, a country in a humanitarian disaster. With violence in the streets and economy in complete collapse, citizens malnourished, citizens malnourished, dying children being turned away from hospitals, starving families joining street gangs to scrounge for food. On what moral platform does the government of Venezuela stand today?

Not to be outdone of course, the U.S. also got an earful today from, Syria. We’re in the seventh year of the brutal Syrian civil war that’s killed half a million people and displaced millions. Syrian President Bashar al Assad has used chemical weapons against his own citizens including children.

Also feeling a bit preachy today, Yemen, which helped draft the resolution condemning the U.S., seemingly more focused at least during the speech on where the U.S. puts it’s embassy on Israel than on the 7 million Yemenis on the brink of starvation in that country’s civil war.

So instead of presenting the vote as a referendum on the United States, Tapper presented the vote as a rebuke to those Western countries (and others, including India), who decided to make common cause with some of the world’s worst despots rather than stand with the lone democracy in the Middle East and the world’s most powerful democracy.

But that wasn’t the only angle of the vote that Tapper attacked, he also attacked the world body’s disproportionate focus on Israel, citing UN Watch:

But here is a bit of context that you might not know. According to U.N. watch which monitors the United Nations, the United Nations General Assembly from 2012 and 2015 has adopted 97 resolutions, specifically criticizing an individual country and of those 97, 83 of them have focused on Israel. That is 86 percent.

WATCH: https://t.co/Tc2BTtBrfB@CNN @jaketapper @TheLeadCNN shares interesting fact from @UNWatch : Between 2012-2015 there were 97 @UN resolutions against specific country. 83 of them were against @Israel which makes 86% of all resolutions. #Hypocrisy #jerusalemcapitalofisrael pic.twitter.com/7t1dfWkBs5

Though he didn’t say it explicitly, Tapper explained why it is that the United States stands with Israel, not to protect Israel from being accountable, but to protect it from the jackals who make up so much of UN membership.

Finally, Tapper finished  off his commentary:

Now, certainly Israel is not above criticism, but considering the genocide of the Rohingya people in Myanmar, the lack of basic human rights in North Korea, the children starving in the streets of Venezuela, the citizens of Syria targeted for murder by their own leader using the most grotesque and painful of weapons, you have to ask, is Israel truly deserving of 86 percent of the world’s condemnation? Or possibly is something else afoot at the United Nations? Something that allows the representative of the Assad government to lecture the United States for moving its embassy?

I don’t know how many minds among his colleagues he changed, but it was certainly refreshing to hear Tapper bring moral clarity to an issue that so many in his business would prefer to muddy.

Other times that Tapper deviated from the MSM orthodoxy is when he criticized Linda Sarsour earlier this year and when he called the Obama State Department out for lying about administration contacts with Iran ahead of the deal.

Props to him for this, but he won’t pick up on Josh Meyer’s story? He may be one of the few who occasionally step outside the media-defined box, but still looks like he’s on a leash of limited length.

Fair point. Someone needled Tapper about this very point on Twitter. Tapper said that Meyer didn’t need his help. True, but that’s not the point. It’s a huge story that should get a LOT more attention.

In spite of his political blindness and conformity, Tapper is a strong advocate for Judeo-Christianity.

The last decade in a nutshell: it is newsworthy that a journalist on CNN committed an act of journalism.

Very true is an honest progressive with a conscience. But his face always looks like a little boy who lost his puppy.

I have hard time taking seriously dimwits from MTV and VH1.

Tapper in a show about the revival of Lynyrd Skynyrd as a remnant band: