Marketing the pollution panic during the season of sparkle.

Earlier this year, I noted that the latest pollutant being targeted by environmentalists was microplastics from polymer-based fabrics.

This proved troubling to many climate justice warriors, as activist essentials such as yoga pants was contributing to the flow of small, plastic particulates to the ocean.

Just in time for Christmas and all its sparkling decor comes news that the latest scourge has been identified: Glitter.

Glitter seems like a harmless bit of fun, but its environmental impact has led some scientists to call for it to be banned.

Most glitter is made from plastic, and the small size of its particles makes it a potential ecological hazard, particularly in the oceans.

“I think all glitter should be banned, because it’s microplastic,” said Dr Trisia Farrelly, an environmental anthropologist at Massey University.

It is important to note that Farrelly has her degree in Social Anthropology and not Marine Biology or Hyrdogeology. However, the elite media probably doesn’t look too deeply into credentials when shopping for an environmental expert.

The source the the concern is that sea life views the microplastics as food. Here is the data that the researcher cited in the panic piece used:

A 2014 study in the open-access journal PLOS ONE estimated that there are about 5.25 trillion pieces of plastic weighing a total of 268,940 tons (243,978 metric tons) floating in the world’s seas. Microplastics made up 92.4 percent of the total count.

I would like to put that 286,940 tons in perspective. Have you ever wondered how much water is in the oceans? Here are the statistics: 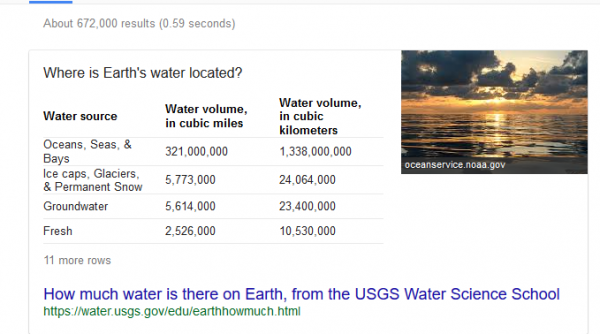 Multiplying the total amount in cubic kilometers in the oceans by 1 million, there is 1,338,000,000,000,000 tons of water. Further calculation reveals that the 268,940 tons of glitter comprises 2 X 10(-8) percent of the total contents of the Earth’s oceans. Therefore I suspect that the hazard to the microbes, fish, and whales is not as vast as the study presents.

Furthermore, it appears that microplastics are safe in drinking water!

Analysis by environmental investigators Orb Media and the University of Minnesota School of Public Health showed 72% of samples taken in the UK were contaminated.

..Professor Richard Thompson of Plymouth University, who was one of the first scientists to identify microplastics in the environment, said important questions remained over the drinking water research.

He said: “There is no evidence that any pieces described as plastic were formally identified, that there was any forensic analysis.

“That’s quite an involved laboratory procedure to confirm the type of plastic. That data appears to be missing.”

He added even if the fibres were plastic, contamination levels were low and the water was safe to drink.

I believe the attack on glitter is a ham-handed seasonal attempt to gin-up more public panic over the lasted environmental scourge to push for more research money…and more government regulations. In fact, the UK planning to impose glitter bans in some cosmetics already.

It is also a great marketing opportunity for some companies to virtue signal and offer a high-priced, organic alternative:

You can still shine bright; you just need to choose your glitter products wisely. Look out for the word “biodegradable” on your shimmer dust packaging, and avoid glitter products with polyethylene terephthalate (PET), polyethylene (PE) or polypropylene (PP) in them. A lot of mermaid-y products say they’re glittery, but that sheen could be the product of plastic-free mica powder.

So, enjoy your glitter this holiday season. Ultimately, I don’t think the climate activists are going to take the sparkle completely out of the season.

The 2016 sales of yoga pants were $2 billion for one firm, and sales are projected to go to $4 billion in 2020. I suspect that there will still be glitter, too…despite the climate justice scrooges.

Personally, I hate glitter. With cards and wrapping paper, it gets on everything. When a jar of it spills, there’s no cleaning it all up. I do not let anything with glitter into my house. Now, if you like glitter that’s your prerogative and not Big Brother Sam’s.

Shocking report reveals that 95% of plastic polluting the world’s oceans comes from just TEN rivers including the Ganges and Niger
http://www.dailymail.co.uk/sciencetech/article-4970214/95-plastic-oceans-comes-just-TEN-rivers.html#ixzz4yzT6r4Ta

95% of the plastic pollution in the oceans comes from 10 rivers and none of them are in Europe or North America.

Where should the focus on this problem be directed?

Warning: Continued attempts to inject logic into discussions will result in banishment from the interwebs. Govern yourself accordingly.

Handlers of “environmentalist” useful idiots don’t care about the environment: they merely use it to seek fascist power.

If the right is not in control of an organization or a movement and girlie-men are, the left will move in, fill the vacuum and corrupt it.

Look no further than the GOPe.

“A global climate treaty must be implemented even if there is no scientific evidence to back the greenhouse effect.”
-Richard Benedik United Nations

Sad, but all of us want a good environment. We just don’t want to be enslaved by the fascist nations making up the majority of the UN.

If nothing else, your quotes show how obama so knowingly sold out our nation.

No hyperbole here. Between this, commuting traitor bradley manning’s sentence, giving Iran nuclear weapons and a host of other things, Obama really is a traitor.

The expected consequences of the Global Warming Industry have been to close highly efficient modern factories and industries in the West and exporting their functions, facilities and jobs to the third world where they operate without regard for the environment and with absolute impunity.

So glitter bombing your lady parts is out, then?

It is the major STD of the arts and crafts world!

In the meantime….if anyone has an address, I know where to get some anonymous Glitter Bombs delivered!

There is no problem so small that the environmentalists can’t turn it into a world-ending disaster unless Something Is Done Right Now.

Will the strippers and exotic dancers find a new “environmental” way of accentuating various parts of their anatomy? Who will volunteer for the extensive testing? Inquiring minds want to know!

Feminism and Environmentalism. Two liberal causes hijacked by the Marxist left and used as props to gain power. At great cost to women and the planet.