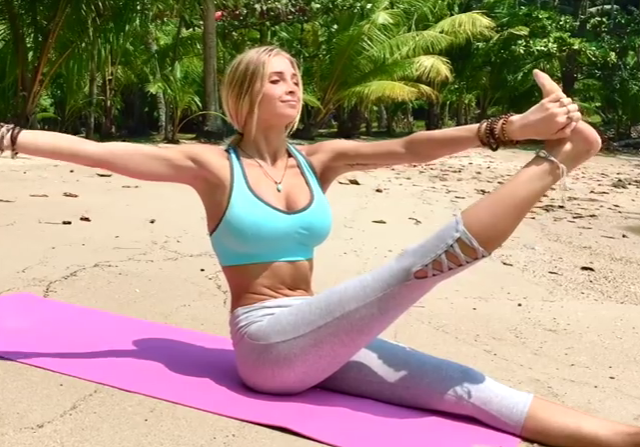 While the Trump Administration pours cold water on global warming alarmist policies, eco-activists are questing for a scary new pollutant.

The bad news: They found one.

The good news: The major contributor of plastic microfibers, the pollutant being studied by researchers, are clothing items most enjoyed by environmental justice warriors.

Plastic fibers from yoga pants and fleece jackets may be polluting the oceans and finding their way into fish, oysters, and other wildlife, researchers say.

Clothes made from nylon, polyester and other synthetic materials shed microscopic plastic fibers every time they’re washed. The ‘microfibers’ are then flushed into the waterways and eventually make their way into the sea.

One study, conducted by volunteers in Florida, revealed 89 percent of their samples included at least one piece of plastic. Among those, microfibers made up 82 percent of the plastic found.

The project is being led by the Mississippi-Alabama Sea Grant Consortium, will rely partly on volunteers in coastal cleanup events. The researchers hope to expand a year’s worth of data collected around Florida that predominantly found microfibers that were the result of flow from residential water sources carrying fiber cast off from the active wear so loved by progressives everywhere.

“Anything that’s nylon or polyester, like the fleece-type jackets,” University of Florida researcher Maia McGuire said.

When McGuire set out to study the kinds of plastic found in Florida waters, she expected to mostly find microbeads — the brightly-colored plastic spheres the U.S. government banned from rinse-off cosmetic products in 2015 because of the potential threat to fish and other wildlife.

Instead, McGuire predominantly found microfibers, even smaller than microbeads and coming from places most people don’t consider dangerous to marine life: their closets.

The makers of the clothing items in question have begun to virtue-signal early.

…The emerging data has prompted clothing company Patagonia — which makes fleece jackets and other apparel from synthetic materials — to support research into the prevalence of microfiber pollution and promote information for consumers about ways to minimize microfiber shedding in laundry.

Consumer-focused efforts such as Patagonia’s outreach, liquor giant Bacardi’s decision to stop adding plastic straws and stirrers to cocktails at company events, Miami Beach’s ban on Styrofoam containers or the federal microbeads ban can help slow the rate of microfibers and other plastics adding up in the oceans, but the pollution also needs to be addressed at its source and at wastewater treatment plants, Wessel said.

“It would be really great if the washing machine companies would get on board and come up with a filter to trap these microfibers,” Wessel said. “I think there’s a big push right now — nobody really disagrees that marine debris is an issue that needs to be addressed.”

Just like the evil auto manufacturers and big oil are being forced to address “green house gas emissions”, now big appliance are being target to force them to create the technology to save the fish.

No word if Leonardo DiCaprio or Al Gore are going to go naked until the microfiber crisis is solved.

But this is me if they try to take my comfy dance class pants:

I think microbeads are the bigger problem. I have no problem with yoga pants. As long as she actually does yoga…

Or looks like she could. Years ago at work we had a spandex committee. Our slogan was. “If you are not asked to wear spandex. please don’t.” It didn’t work out. Even then there was the resistance.

Damn that Hillary with all her “missing emails” about her “yoga” classes, and the yoga pants she came in on!

It’s what the majority of my clothes are anyways!

Back to furs, feathers and natural fleece…. for PETA.. oh, the horror!

Huh? Who in the US is dumping raw sewage into waterways?

In other words … there’s no actual data, but we’ll just assume that another crisis is upon us.

The young lady in that picture could slather me with yogurt any day….

pants or no pants…

You old goober, do you think your heart could stand the strain?

Yes. Absolutely. It’s a hypothesis that I’m willing to test.

This is a very common argument that suffers the same flaws as do others like it. For example, in the average person’s blood, several dozen chemicals are present that arise from various products or their manufacture and that are not natural. This is a fact.
>
Do any of these man made chemicals constitute a threat to a person’s health or well being? The short answer to this is that we just do not know, however, since people are living longer than at any time in human history and people’s health have never been better, it would seem the answer to this question is “No”.
>
If you ever take a course in toxicology, you learn that it is not the poison that is important, rather it is the dose. For example, selenium is a highly toxic metal, but should you eliminate selenium from your diet, you will become quite ill for it is an essential micronutrient. Another very important concept is causal vs casual relationships. In other words, you must show a definite link between the presence of a toxin and any deleterious effects before you can condemn that toxin.
>
In the case present in this article, we know that micro-fibers are present throughout the environment. Likewise the science of toxicology is struggling with quantum dots and other nano-size particles because their quantum mechanical properties overwhelm their chemical properties, their mechanisms of toxicity vary with their size (and currently follows no known consistent size vs. mechanistic behavior), and that we simple do not know how to protect people from them. But then again, humans have been dealing with nano-sized materials throughout the history of man because these nano-sized materials are generated by nature, are present as things such as viruses, and so forth.
>
The bottom line is that while these pants shed these fibers and these fibers are found everywhere, there is no evidence that do cause harm. The harm they cause is implied and this implication of harm is a tactic used by the environmentalists to sow fear in an effort to get their agenda passed. To use that argument here – shameful.

The chick in the photo has to do yoga without pants. Because mirofibers.

I only concede this point because of my love for the environment.