“He loves our Country and is a true FIGHTER!” 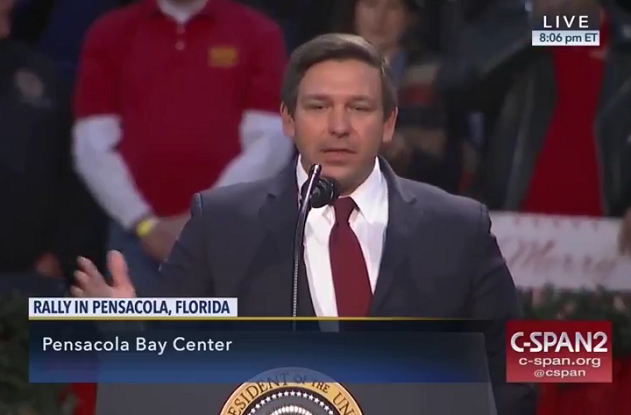 While DeSantis hasn’t yet entered the race, it’s an open secret that he intends to do so.  DeSantis was the early fundraising front-runner in the 2016 Senate race until Senator Marco Rubio (R) announced that he was going to run again after losing the GOP presidential nomination.

DeSantis is a member of the House Freedom Caucus and sits on the House Oversight Committee.  He was one of the signatories on the House letter condemning the academic boycott of Israel, worked with Senator Ted Cruz (R-TX) on Congressional term limits, initiated House investigations into the Obama administration Hezbollah scandal, and has been instrumental in the investigation into the Uranium One deal.

The president tweeted his support for DeSantis.

I’m grateful to have @realDonaldTrump’s support & appreciate what he has done — from appointing great judges to recognizing Jerusalem as Israel’s capital to signing a pro-growth tax cut — to get our country back on track. 1/2 https://t.co/mqSdfrHIXK

As an Iraq veteran, I’m especially appreciative of his efforts to support our military and our veterans. Merry Christmas and Happy New Year! 2/2 https://t.co/mqSdfrHIXK

U. S. Rep. Ron DeSantis, a Palm Coast Republican who continues to mull a bid for governor, drew Twitter praise Friday from President Donald Trump, who flew to Palm Beach for the Christmas holiday.

. . . .  DeSantis, who has a campaign account open with the Federal Elections Commission to run again for his U.S. House seat, hasn’t opened an account to run for governor.

Brad Herold, of the Ponte Vedra Beach-based Ron DeSantis for Florida, said in an email Friday that the congressman will “make a decision when the time is right.”

While DeSantis hasn’t opened a campaign account for the governor’s race, he has a state political committee, the Fund for Florida’s Future, which started raising money in May and had about $2 million on hand as of Nov. 30.

You can read DeSantis on the issues here.

DeSantis is among a handful of Republican lawmakers who have openly pushed to curtail Special Counsel Robert Mueller’s investigation into alleged Trump campaign ties to Russia. This month, DeSantis accompanied Trump to Pensacola for a campaign rally supporting Republican Roy Moore’s failed bid for the U.S. Senate in Alabama.

Democratic consultant Steve Schale, alluding to Moore’s defeat on Dec. 12 to Democrat Doug Jones in the deep red state, riffed that Trump’s support may not be all that valuable.

“Based on Trump recent success in picking candidates, this might be the kiss of death,” Schale tweeted.

Matt Harringer, a campaign spokesman for Democrat Gwen Graham, called DeSantis “an extreme congressman who is leading the smear campaign against Special Counsel Robert Mueller and the Russia investigations.”

Another GOP candidate, Jack Latvala, recently announced his resignation from the state Senate as the result of a sexual harassment scandal and is expected to exit the race.

. . . . John McKager “Mac” Stipanovich, a longtime Florida Republican consultant, said Trump’s shout-out on Twitter could give DeSantis a boost in a field where the well-funded Putnam is considered the front-runner.

“His Trump cred will put him in good stead,” Stipanovich said. “DeSantis would be a viable candidate in a Republican primary if he can raise the money.”

. . . . During his tenure in Congress, which ended in 2011, Putnam ascended to a leadership position and voted for changes to immigration policy and other issues that have since become liabilities in Republican primaries. As a gubernatorial candidate, he has been trying to position himself further to the right on several issues.

You can read Putnam’s stance on various issues here.

DeSantis was my Congressman until he was re-districted further south of here. I have always admired him and considered him a prime choice for the Senate, until Little Marco reneged on his resignation. He would make a great Governor and that position would be a good stepping stone to higher office.