Thousands of Californians have been evacuated as firefighters struggle to contain wind-swept flames. 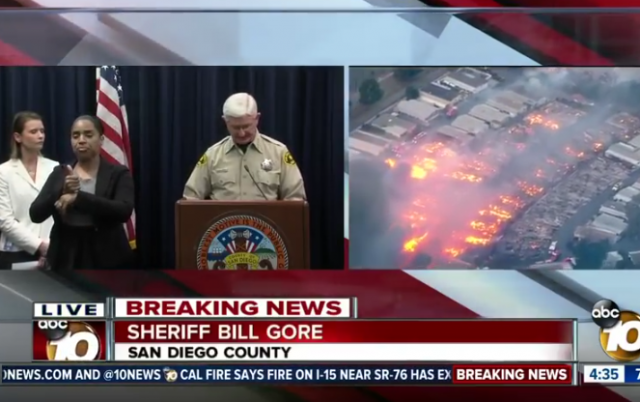 When I reported on the Los Angeles area fire, threatening the famed Getty Center Museum, I was deeply worried that the Santa Ana winds would ignite another blaze somewhere in the vicinity of my hometown, San Diego.

This fear materialized the day after that post, and a retirement community and equestrian center were the first victims in the area’s rural community of Fallbrook:

Flames were practically on top of Dick and Joan Marsala’s home when they got an urgent knock on the door and were told to leave.

The couple, in their mid-80s, grabbed only a change of clothes and medications before fleeing Thursday through wind gusts and smoke as fire swallowed the row of mobile homes behind their place in the Rancho Monserate Country Club north of San Diego.

It’s a story that has played out in communities across much of Southern California this week as ferocious winds whipped sparks into massive infernos that have killed one person, destroyed more than 500 buildings, killed dozens of horses and forced hundreds of thousands of people to run from fires that have burned nearly 250 square miles since Monday.

This particular blaze has been tagged as the Lilac Fire and so far has incinerated over 4000 acres, burned 85 structures, and killed 25 horses. The equestrian community has been hitting social media hard, to find transportation and accommodations for the animals.

This one especially caught my eye:

Anyone in San Diego with extra space? https://t.co/md6vXsWcLZ

There is little containment of this blaze or any of the other wildfires raging through this state: 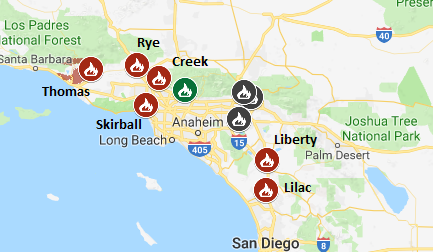 Thomas Fire: The Thomas fire in Ventura County, the largest of the six blazes, started Monday night as a 50-acre brush fire in foothills east of Santa Paula and grew to 10,000 acres in just four hours. The fire had burned 132,000 acres of land by Friday morning and was just 10 percent contained.

Creek Fire: The Creek fire has incinerated over 15,000 acres, and has damaged or destroyed at over 60 structures. Over 150,000 residents have been evacuated and some 2,500 structures are threatened. The blaze was 40 percent contained.

Skirball Fire: The Skirball fire has burned 475 acres and was 30 percent contained as of Friday morning; firefighters had have managed to keep it from breaching containment lines.

Liberty Fire: The Liberty fire scorched 300 acres of land and was 60 percent contained as of Friday morning.

Rye Fire: The Rye fire has scorched over 6000 acres and was 35 percent contained as of Thursday night. Over 5,000 structures are still threatened by the flames.

In response to this disaster, President Donald Trump has now declared a state of emergency in Southern California.

“This action will help alleviate the hardship and suffering that the emergency may inflict on the local population and provide appropriate assistance for required emergency measures,” a White House statement said.

Despite the president’s support, the comments from some on social media are quite contemptible:

Has anybody else been thinking about the possibility that the #Californiawildfire and @realDonaldTrump are the same thing?
Both are bright orange, massively destructive, and trying to render public lands unusable.

It’s about time you recognized a California wildfire. It must have burned near one of your cronies homes since it hit Bel Air. Douche

Dear,@realDonaldTrump don’t visit our state and make things worse. It’s already bad enough as it is.

These tweets clearly show that irrational hate of President Trump burns with more intensity in some people than compassion or wisdom.

Sorry, I just had to say it.

notamemberofanyorganizedpolicital in reply to Socratease. | December 9, 2017 at 3:52 pm

2 Peter 3:7-12, “But the heavens and the earth, which are now, by the same word are kept in store, reserved unto fire against the day of judgment and perdition of ungodly men.
8 But, beloved, be not ignorant of this one thing, that one day is with the Lord as a thousand years, and a thousand years as one day.
9 The Lord is not slack concerning his promise, as some men count slackness; but is longsuffering to us-ward, not willing that any should perish, but that all should come to repentance.
10 But the day of the Lord will come as a thief in the night; in the which the heavens shall pass away with a great noise, and the elements shall melt with fervent heat, the earth also and the works that are therein shall be burned up.

The derangement is on full display when people make these disasters about politics. This is like a tropical storm, with fire blowing instead of rain, and it looks like the Santa Ana conditions will be around for a full week. My sister has been out of her home since 2 a.m. Tuesday, with no end in sight.

I am thankful there has been only one death so far, and Californians are thankful for the firefighters who are putting in such long hours in horrible conditions.

these tweeters are IDJITS of the first water.

we re fortunate that Trump is POTUS and doesn’t lead with behind.

I noticed a few well regarded commenters at aoshq being less than charitable when the Santa Rosa wildfires were raging. I won’t name them and shame them – but they were pretty flippant and callous about those ‘libs’ getting their due.

My mom(86) and dads(89) house in Oakmont was but 300 yards from getting burnt down when the wind shifted that first Monday nite.

Regarding fire prevention. Both the Santa Rosa and the current LA Basin wildfires rose to major conflagrations because of fierce windstorms. Imagine an Oak tree next to a road on top of a ridge. Imagine that same Oak tree completely engulfed in flames. Now imagine an 80mph gust of wind blowing red hot Oak embers 500 feet down a very steep gully. Now imagine 10,000 burning Oak trees and 500,000 windblown red hot embers airborne over a 6 lane freeway.

Dozed 20′ fire breaks? Worthless. Prescribed spring burns? Sure, might help a bit. But. Yes, there’s a but. California is huge. It’s literally impossible to burn enough acreage to make much of a difference. Oh, and all of that low altitude mixed oak and coyote bush chaparral grassland? It’s
loaded with poison oak. People inhaling that oily poison oak smoke can get a serious lung infection. People who get sick from inhaling poison oak oils will sue the State of California. typing this on my kindle. sux.

I saw Joe Bastardi, formerly of Accuweather, the other day pointing out that he predicted a bad fire season this year because of the rain in previous years. Stuff grows, dries out, and when the wind blows, it will go up from a spark.

Too few fires, and we have a situation where mega-fires will occur, and parasitic insects threaten the forest.

I wouldn’t think of Ventura County as a grassland.

I would call those canyons scrub, but the same analysis applies.

Hopefully, Lindsay vonn Moron will get stoned and ski down a burned-out hill — before it snows. Or maybe not (she just injured her back.)

I can see where the brush line has been mowed even further down the slope from my back yard in San Diego. Nevertheless, with winds like we had Thursday, that would have been precious little break, had there been embers in the wind.

My thoughts and prayers go out for those affected by these fires, just as they did for the ones who were hit by the various hurricanes.

I am disappointed by the mean-spiritedness of some social media idiots. The fires harm people who are our neighbors, regardless of their political affiliation. I am well aware that this garbage behavior first came to my attention days ago as a twitter attack by an LA politician enjoying the destruction of a purported “right-winger’s” home,

and this origin does not affect my response. We all know our duty to our neighbors.