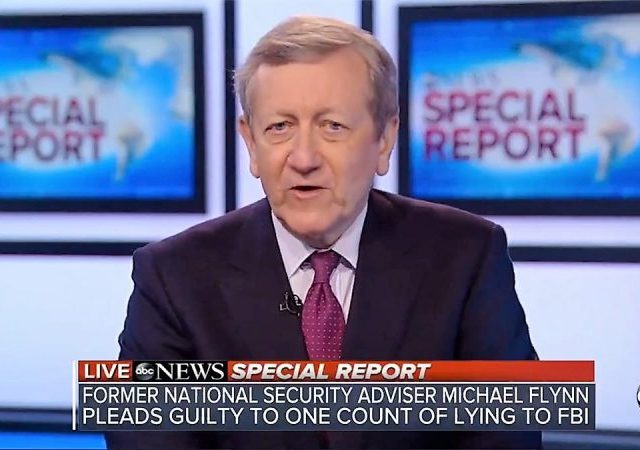 Professor Jacobson addressed the seriousness of the situation in a post over the weekend:

Goldston also told staffers that the network was conducting a “full review” of the error and its aftermath.

Ross had initially reported Friday morning that Flynn was prepared to testify that Donald Trump as a candidate had instructed him to reach out to the Russians. Ross said more than seven hours later on “World News Tonight” that his information was actually that Flynn was prepared to testify Trump made the request as president-elect. On Saturday evening, ABC News said Ross had been suspended for four weeks without pay for what it termed the “serious error.”

During ABC News’ morning editorial call Monday, audio of which was obtained by CNN, Goldston excoriated his staff for the error.

“I don’t think ever in my career have I felt more rage and disappointment and frustration that I felt through this weekend and through the last half of Friday,” Goldston said.

While it is gratifying to see Ross suffer real consequences for this, especially given his history, one has to wonder if Ross is simply being used as a scapegoat. This is after all, the home of “anchor” George Stephanopoulos.

Chris White of the Daily Caller has more on the uproar at ABC:

ABC News President: ‘We Have Taken A Huge Hit’ Over Bungled Flynn Report

ABC News “spent this weekend getting absolutely pilloried as a news division for reporting fake news,” Goldston noted, according to a CNN report Monday afternoon. “250,000 tweets. One percent positive, 99 percent negative about this news division. Two tweets from the president,” he told staff…

“If it isn’t obvious to everyone in this news division, we have taken a huge hit and we have made the job of every single person in this news division harder as a result,” he said. “It’s much, much harder. We have people in Washington who are going to bear the brunt of this today and in the days forward. Very, very, very, very unfortunate. Really, really angry about it.”

This smacks of blame-shifting. After-the-fact complaining by an executive who kept Brian Ross on staff despite his previous screw-ups, then failed to take charge while Ross’s bad report stayed up for hours, then at first was only subject of a “clarification.” https://t.co/fWGvmMokGO

Brian Ross should be fired. He is completely comprised. By ABC keeping him, it has confirmed our suspicions about ABC.

Actually George Stephanopoulos is even worse.

Stephanopoulos who is the Clinton Crime Conspiracy consigliere and enabler.
why would we ever have found this behavior unacceptable at the MSM.

their understanding is that this too shall pass, like a Goldston – err gallstone.

This is a management problem.

This entire episode is suspicious as all hell. I don’t think for an instant that this James Goldston lost a moment of sleep over it. Hell, knowing Dems and their dirty tricks, he probably orchestrated the entire affair, and on Friday, so all the papers on Saturday, that nobody reads, publish their corrections.

Hell, I don’t think Brian Ross went home ‘without pay’. There is no way to confirm this except for ABC’s word, which is pmuch worthless. He did exactly what he was instructed to.

Isn’t it convenient how audio of that ABC staff meeting was released, showing Goldston all outraged.

The damage was already done before they published corrections on Saturday which nobody read. I’m not buying any of this from ABC, they are the Fake News media after all.

The flash of Fake News is the modus operandi of the MSM.. It allows their ill informed audience to grasp the propaganda point, knowing the retraction will be generally disregarded. Ross is a specialist in fake news.
The problem here was the entirely unanticipated precipitous fall in the stock market and the execution of hedge and growth fund Stop Sell orders. ABC believed its own ridiculous fake economic analysis that Trump had nothing to do with the market rise. This meant real exposure to lawsuits for real money.

If all of the management in the msm did to anyone on their staff who did the same things that Ross has done, there wouldn’t be any anchors left in TV land. I read the WSJ every day and as most of you know the fronts section is just like the NYT. The rest of the paper including the opinion pages is either neutral or conservative, but when reading the front section it is so obvious that they are not actually lying, they are omitting many things that would change the slant of their article if they had included it. Think Trump and the little boy in the wheelchair and feeding the Koi in Japan. This is as bad as what Ross did but not as obvious. It seems that the modern msm writers don’t understand that with the net and other news sources, they can’t get away with this sort of cheap trick any longer. A reader will take only so much before they lose trust in their sources and drop them. This is the future of the newspapers and TV news.

notamemberofanyorganizedpolicital in reply to inspectorudy. | December 5, 2017 at 1:28 pm

RE: “there wouldn’t be any anchors left in TV land…”

So what’s wrong with that? They’re just “news READERS” after all – as the Brits name them.

puhiawa in reply to notamemberofanyorganizedpolicital. | December 5, 2017 at 10:07 pm

In reality, he will be given a Xmas bonus far in excess of a months pay. Kabuki.

Goldston: You idiots! I said screw Trump! Not the NYSE! For Christ’s sake, can’t you bozos keep that straight? While Ross is cooling his heels at the hacienda I’ve got Legal chewing on my ass from dawn to dusk! Do you guys understand what this may end up costing us?

“I don’t think ever in my career have I felt more rage and disappointment and frustration that I felt through this weekend and through the last half of Friday,” Goldston said.

“Stop being so blatantly obvious about the fact that we’re lying our asses off about Trump every day, you’re making the stupid plebes realize we’re lying liars who lie”.

gotta love it unless you have it

One wonders just how much money ABC News president James Goldston personally lost in the stock market that afternoon. That might account, at least a wee mite, for the overwrought tongue-lashing.

hmmm, also makes you wonder how much money ABC could MAKE using insider information by knowingly put out false information that would have an impact on stocks.

This won’t last. IIRC, when Stephanopoulus was hired, ABC swore on a stack of Bibles that he wasn’t going to cover politics due to his ties to the Clinton administration. The conflict of interest was just too blatant.

That lasted about a year. Now Stephanopoulus is one of their chief political reporters and ABC doesn’t see anything wrong with it. Ross will cover Trump again after a few months. Some “crisis” or big news story will prompt ABC to put all of their reporters on the story and Ross will just go back to work.