Will the Senate Change Its Tax Plan Ahead of Vote?

Will the Senate Change Its Tax Plan Ahead of Vote? 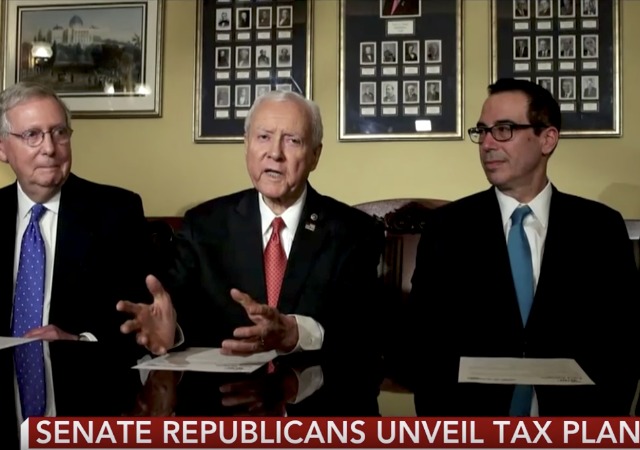 It’s a big week in the Senate as the lawmakers will vote on the GOP tax plan. They’re hoping to pull it through after two miserable Obamacare repeal attempts this year. Needless to say, they’re desperate for a victory.

But as I’ve said over and over, the GOP only has a two-seat majority, which means they cannot afford holdouts. Even though they have a tax plan settled, word on the Hill is that they may make changes in order to rein in members of their party that could foil a victory.

President Donald Trump will go to the Hill on Tuesday to push for this bill. There are a handful of GOP senators who have not said they will vote for the bill: Sens. Susan Collins (ME), Bob Corker (TN), Jeff Flake (AZ), John McCain (AZ), and Lisa Murkowski (AK).

Collins, McCain, and Murkowski caused headaches during the Obamacare repeals, along with Sen. Rand Paul (R-KY). Paul seems to be a lock for this since it will include language to repeal the Obamacare individual mandate.

But now it’s Sen. Ron Johnson (R-WI), who has already said he cannot vote for the bill and Sen. Steve Daines (R-MT) who have become a thorn in the side of the leadership. From The Washington Post:

Johnson and Daines want changes to the bill they believe would help certain companies that file through the individual income tax code. These companies, often known as “pass-throughs,” can be small businesses but also include larger firms with many employees. There are millions of such companies in the United States, and they account for the bulk of U.S. firms.

Currently, in the Senate bill, these companies are allowed to deduct 17.4 percent of their income from their tax liability. Negotiators are looking at expanding that credit up to about 20 percent, two of the people said.

It’s unclear if Johnson would accept these changes as sufficient, and a final decision hasn’t been made. If Republican leaders believe Johnson’s demands have become too unreasonable, they could try and forge ahead without his vote.

WaPo’s sources said these two aren’t the only ones. They didn’t provide more details, but apparently “numerous members” have requested changes to the bill “and their needs don’t all overlap.” That could cause a headache because you make a change for this person that could potentially tick off another person.

(You know how you can avoid this? Scrap the tax code altogether and let us taxpayers keep our money. JUST A THOUGHT.)

Another problem: The deficit. The tax plan cannot add more than $1.5 trillion to the deficit if they want to pass it through reconciliation, which protects them from a filibuster.

They have $80 billion to work with.

Senate Republicans are also seriously considering a change requested by Sen. Susan Collins (R-Maine), which would allow Americans to deduct $10,000 in local property taxes from their taxable income. This provision was in a bill that passed the House of Representatives, but it is not in the Senate bill. Though Collins has voiced the most concerns about its absence, other members have quietly said they also want the change to be made.

Making this change could cost more than $100 billion over 10 years and would probably require Republicans to find new money to offset it.

The first vote will occur on Tuesday with the Senate Budget Committee. Johnson is on that committee along with Sen. Bob Corker (R-TN), who has expressed disdain for the bill over fears it will add too much to the deficit. If they vote no then the bill won’t even make it to the Senate floor.

But this is what it all comes down to. None of this is reform or anything huge. It’s all a reshuffle because the lawmakers cannot stop spending. Until they stop spending there cannot be actual tax reform. Instead, they will switch who pays what so they don’t lose their precious revenue. There are no tax cuts. Yes, you may not pay as much as before, but that’s because they’re shuffling the tax burden.

I would love to see the Mandate go, that would be a beautiful thing!

Whatever crappy tax “reform” comes out of Congress, T-rump will sign it and declare it the BEST, BIGGEST tax cut in EVAH…!!!

Something will get signed…or something won’t get signed…we won’t know until we can see what is in the pudding!

Nothing will get out of the Republican Congress.

I don’t know why they’re so focused on this aspect of Obamacare. It’s the regulatory mandates in Obamacare that have made insurance so expensive and reduced network size, not the individual mandate.