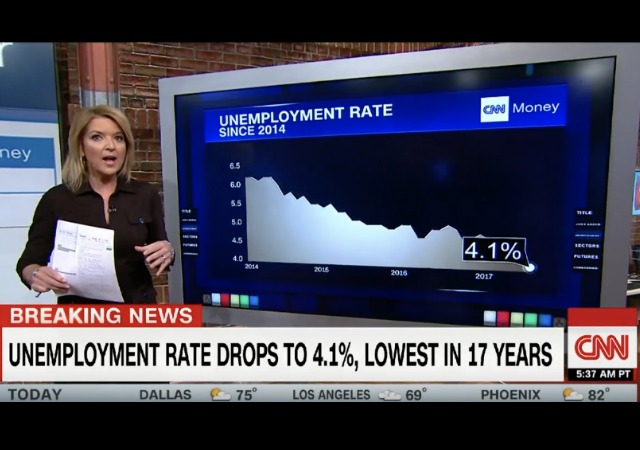 “Today’s report, albeit a little bit mixed, is still a relatively decent number. It still points towards the positive trend that we’ve seen in payroll growth over the last several months and the last couple of years actually,” said Tony Bedikian, head of global markets at Citizens Bank. “In general, the economy is moving along, though a little softer than many market participants anticipated.” 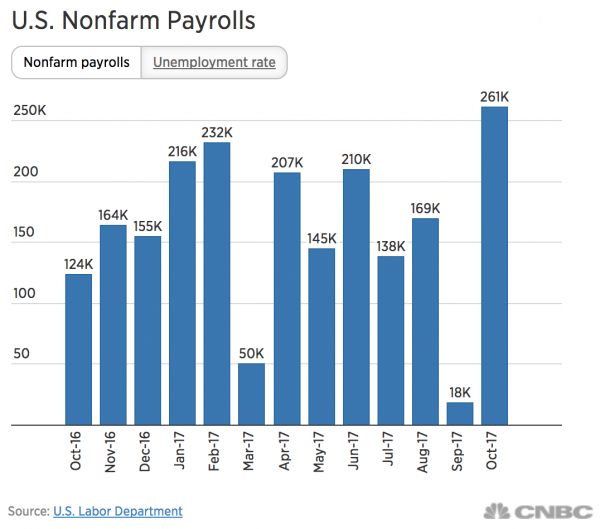 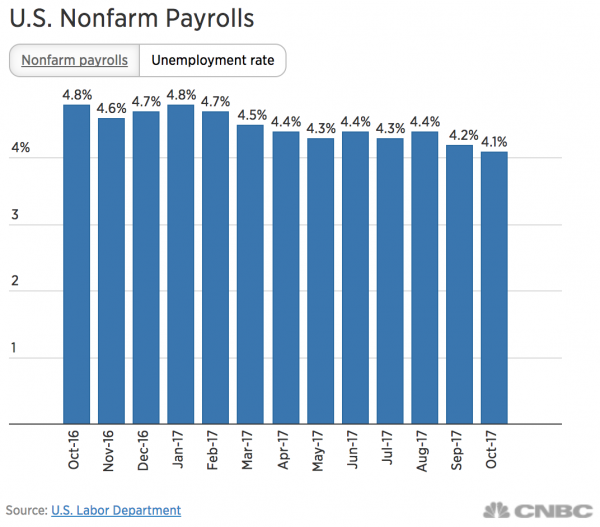 Hospitality services, like restaurants and bars, brought in the most jobs by 89,000. Professional and business services added 50,000 and manufacturing had 24,000 new jobs. The health care industry added 22,000 jobs.

However, wages went slightly down. Private sector hourly jobs went down by 1 cent to about $26.53 an hour. Economists thought this month would show a 0.2% gain. The participation rate also fell by 0.4% to 62.7%, which is the lowest since May.

Mike Loewengart, the vice president of E-Trade Financial, said this is the exact kind of jobs report the Federal Reserve needs to justify raising rates in December. From The Wall Street Journal:

October’s jobs report comes two days after the Federal Reserve held short-term interest rates steady at its last policy meeting, but suggested it remained on course to lift them before year’s end given the economy’s “solid” growth rate.

The strength of the labor market plays an important role in the Fed’s decision making, alongside inflation and economic growth, and Fed officials will likely view the latest jobs report as strong in terms of hiring, even if wage growth was disappointing. A tighter labor market should lead to better paychecks and ultimately stoke consumer inflation.

The central bank cited ongoing strength in the labor market when it last raised rates in June, to the current range between 1% and 1.25%. Officials have penciled in one more move for 2017 if the economy stays on track, and the Fed has one more meeting scheduled before the end of the year, on Dec. 12-13. Policy makers will see one further payrolls report, for November, before that meeting.

The traders have kept bets that the Federal Reserve will choose to raise interest rates in December. From Reuters:

“I don’t think it is going to knock the Fed from raising rates in December,” said Sean Lynch, co-head of global equity strategy at Wells Fargo Investment Institute in Omaha. “Flat wages doesn’t concern us too much. We do think wage pressure could start to weigh on the markets next year in a tight labor market.”

After the report traders saw about a 90 percent chance of a December rate hike, little changed from before the report, based on a Reuters analysis of Fed funds futures traded at CME Group Inc’s (CME.O) Chicago Board of Trade.

I know dozens of people who are still unemployed or underemployed.

Exactly. I’ve been actively searching all of this year, and have yet to find something. I’m overqualified, don’t have the right experience, too old, asking for “too much” compensation, too this, too that…and then employers bellyache about not being able to find “quality employees.” Such BS. A lot of it has to do with over-reliance on HR (which is absolutely pathetic when it comes to finding suitable candidates; nonetheless they’ve been granted the powers of great almighty gatekeeper and must therefore justify their existence somehow) and ATS (applicant tracking systems) – software that searches resumes/applications for “keywords” and automatically rejects otherwise qualified candidates who don’t fulfill every jot and tittle in an employer’s fantasy-based wishlist. It is a sick, pathetic joke.

Some of what you are experiencing is the invisible hand squeezing you.

I know for a fact what happens when those diversity boxes get ticked. The free market will force white males to outperform and get hired in spite of the system getting rigged against you for things that have nothing to do with you.

Sucks in the short term, but in the long term- you can’t argue with you becoming better. Well, that or Atlas will shrug.

Ha, I never fill out those “voluntary” self-reporting diversity boxes anyhow. Supposedly (recruiters on job-hunting FB pages, etc tell me) they are merely to satisfy federal bean counters and do not factor into company hiring decisions. Gotta wonder, though.

Fake measure and Obama will get all the credit from the MSM anyways.

The U-6 number is a much more meaningful measure, and it doesn’t paint such a rosy picture. Our economy continues to have huge numbers of people who are no longer “in the work force” but who should be.

stop the H1B’s and the locals have a better chance for a job.

salaries have NOT increased over the past 16 years.

employers are hiring part timers, so as to not have to pay retirement.

best thing for youngsters is go into trades and work for yourself –
electricians, plumbrts etc, and you don’t need to burden yourseld with loads of college debt.

don’t know too many jobs that require native studies degrees – unless of course your Fauxcahontas or fFkistinians with a minor in antisemitism.

I must say, if the numbers were bad under Obama, they AWAYS blamed a disaster, terror event, or whatever may convenient (can you say snowstorm?).

The number is still not the one that should be reported as mentioned above, but this is at least an improvement! that is moving us in the right direction.

Under Obama we saw job creation but it was a shift from Full-time to Part-time labor and service vs. manufacturing and other job types. I worked in IT in one of the big retailers for the last 15 years and watched them do everything they could to reduce cost over at least the last 10 years. Retail does what its done in the past – keep prices the same but reduce quantity. But that only works for a period of time, eventually you have to raise prices. I’ve watched quality drop in brand name products I buy – I suspect to cut costs. Outsourcing and offshoring became a big cost cutter but eventually even that wasn’t enough. The other side of that is that companies that have moved production offshore can’t bring it back without major tax hits followed by possible lawsuits from investors. Despite the propaganda from the last administration we haven’t recovered economically. With the rise of automation (a win/win for business and consumer) we’ll see even more job loss. This administration has it’s hands full but it’ll take more than the meagerly tax changes they’re proposing to turn this around.