All eyes on the Senate now. 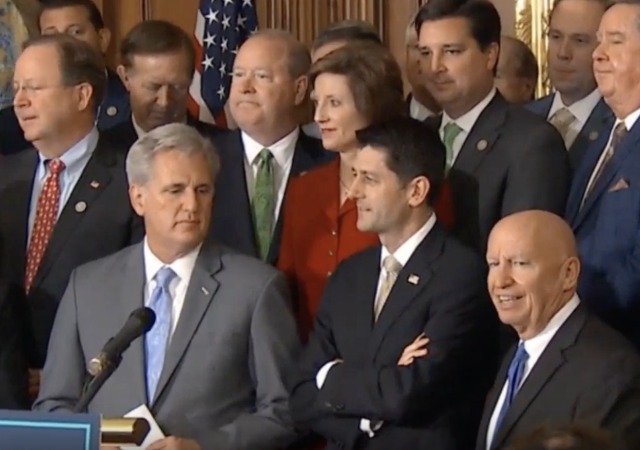 The GOP-controlled House passed a tax bill that eliminates many popular deductions, but reduces the tax brackets to three instead of seven and doubles standard deductions.

It passed 227-205. However, 13 Republicans voted against the bill and no Democrats voted for it. This could spell gloom for it in the Senate, which the GOP holds a two seat majority.

The bill would repeal the alternative minimum tax, increase the child tax credit, abolish the estate tax by 2025 and transform the U.S. system for taxing multinational corporations. The plan would raise taxes on some people by removing personal exemptions and deductions for state and local income taxes, medical expenses and student loan interest. On the whole, the bill would reduce federal taxes by $1.4 trillion over the next decade.

“We are in a generational defining moment for our country,” Mr. Ryan said on the House floor before the vote, declaring that the bill would lead to faster economic growth and higher wages. “It is finally time that we get the general interest of this country to prevail over the special interests in Washington.”

The Joint Committee on Taxation claimed that the House tax bill will provide “tax cuts for every income group in 2019.” The committee also said that around “8% of households would pay more in 2019 and that proportion would rise over time.”

The Republicans who voted against the bill come from high taxed states: New York, New Jersey, and California. They do not approve of eliminating the state and local tax deduction. But maybe they should take that up with their state legislators?

Rep. Pete King (R-NY) lashed out against the bill, which he described as “an unforced error” and worries it may harm the GOP in the 2018 midterms.

That point along with the Senate’s bill eliminating the property tax deduction may cause problems in the upper chamber. However, the Republicans do not have senators from those states.

So the House passed its tax bill. The Senate is still working on one and hope to finish it by the end of the week. If the Finance Committee accomplishes that then the Senate hopes to bring it to the floor after Thanksgiving.

If the Senate passes its bill, then the two chambers will have to reconcile.

Considering how well the two Obamacare repeals went in the Senate, it’s easy to believe that tax reform will fail as well. Despite the fact that the Senate does not have GOP senators from those high taxed states, one senator has already come out against the bill: Sen Ron Johnson (R-WI).

That means the senate Republicans can only lose two more votes. If they lose one more then Vice President Mike Pence can cast his tie-breaking vote.

Another reason why the senate bill may not pass? The tax cuts on individuals will expire after 2025. In other words, it’s all temporary. The corporate tax rate will permanently be 20%, though.

Paul voted “yea” on the American Health Care Act. This is the recent bill which would have repealed Obamacare but was defeated by John McCain’s infamous “thumbs down.”

Seems a temporary tax cut is still better than no tax cut eh?

Sessions should do the honerable thing and step down from AG and be appointed to his old seat.

If the GOPe is good at anything, it’s good at doing nothing but occupying space and taking benefits.

Talk about ‘welfare queens.’ That’s the leadership of the Republican party.

Boehner’s bartender should have done him in:
The former bartender who was charged with threatening to poison House Speaker John Boehner was found not guilty by reason of insanity:
https://www.politico.com/story/2015/07/bartender-michael-hoyt-john-boehner-threat-poison-not-guilty-120045

I’m sure that the “True Conservatives” in the Senate will kill any tax bill in order to make sure the Democrats win again.

Could someone please tell these goofballs that, while they are rearranging deck chairs on the Titanic, the iceberg labelled “DEBT” is looming? Could we maybe focus on the BUDGET? One that actually CUTS spending instead of increasing it?

It’s not a tax cut; it’s just a rearranging of revenue sources and accounting gimmicks. It scores positively because the projections are that after 10 years it is projected to cut the projected deficit by $33-billion. That’s about 3 days of expenditure over the next 10 years.

A projection against another projection. Sheesh! For crying out loud, the margin of error in the forecasts is 50x that size. That means it is too small to measure. But, by golly, they’re going to hang their hats on that one.

They always talk about tax reform, but never about spending cuts. They’re not serious – they no longer even know how to be serious about our nation’s finances.