A look at George Takei, Thor, and social justice messaging. 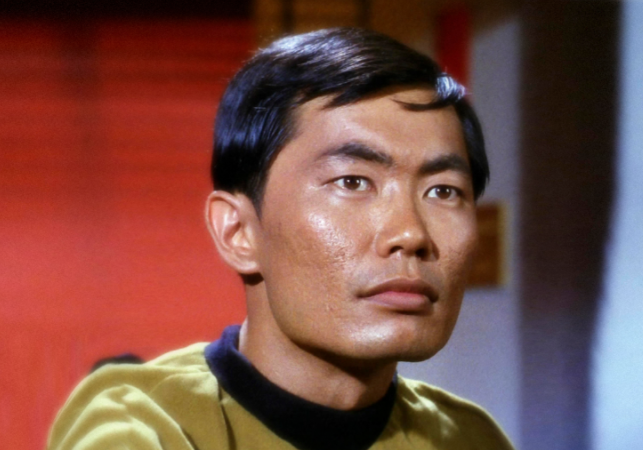 I once noted that with the election of President Trump, a new era for Alpha Males began.

However, social justice warriors who want to lead the #Resistance charge against our current president are targeting “toxic masculinity” in the same way they used the smear “era of greed” against President Ronald Reagan. The crusade is not working and is poisoning the political and cultural environments.

Today, in particular, I want to look at the entertainment industry.

Yesterday, Fuzzy described the charges that Star Trek star George Takei sexually assaulted a former actor and model in the early 1980’s, around the time that the iconic science fiction series was transitioning to the big screen. The audiotape of Takei being interviewed by the always raunchy Howard Stern is particularly damning and tends to support the assertions being made.

“Did you ever grab anyone by the cock against their will?” Stern asked at one point.

“Some people that are kind of … umm … skittish or maybe … um … afraid and you’re trying to persuade…” Takei said.

…Stern then tried to get Takei to clarify further, asking if he ever gave someone “a gentle squeeze on the balls.”

“More than a gentle,” Takei replied. “But it didn’t involve power over the other.”

Talk about “Toxic Masculinity”!  The Huffington Post makes a point of separating “masculinity” from “toxic masculinity,” and in this sense, Takei’s admission that he was “more than gentle” in sexually fondling men against their will screams toxic masculinity.

Toxic masculinity is built on two fundamental pillars: sexual conquest and violence—qualities men regale as manly and virtuous. If sex and aggression are the measuring sticks of manhood, it’s no wonder rape education remains a conversation of what women should be doing to not get raped rather than what men should be doing, which is not raping. How can we hope to stop violent sexual behavior if violence and sexuality are still considered primary virtues of manhood?

As an aside:  I’m a fan of Star Trek – The Original Series, so I initially followed Takei’s Twitter feed as one of the first in my list. However, with the constant anti-Trump, #Resistance, #FakeNews streaming from his feed since President Trump’s election, I had to terminate that social media connection.

I will admit to a case of #schadenfreude, as Fuzzy suggested. His previous bashing of President Trump makes his current predicament amusing. I may have to re-follow him, as this tweets have become genuinely entertaining with weird accusations that the Russians are the problem.

A friend sent me this. It is a chart of what Russian bots have been doing to amplify stories containing the allegations against me. It’s clear they want to cow me into silence, but do not fear, friends. I won’t succumb to that. Source: https://t.co/i5sFMpVxVs pic.twitter.com/AhvbUvgtNV

The Russians didn’t make him forcefully grab men’s genitals “against their will,” and he knows it.  So he’s trying to deflect the focus on his alleged sexually-abusive actions and admissions to the Russian bot boogeyman.

The leftist campaign against “toxic masculinity” threatens to pollute Hollywood’s biggest products: Blockbuster movies. I went to see Thor-Ragarok (because I adore Chris Hemsworth’s title character and Tom Hiddleston’s Loki), but I was perplexed at the ham-handed social justice, girl-power messaging that was being force-fed to the audience in the form of the character of a black, lesbian Valkyrie:

Recently, Thor: Ragnarok’s Tessa Thompson was moved to share her queer interpretation of Marvel’s Valkyrie, a key player in the superhero mega-saga’s latest installment, on Twitter. But despite Thompson apparently persuading director Taika Waititi to shoot footage showing a woman leaving the cosmic superhero’s bedchambers, just to make sure no one was left in any doubt about her character’s sexual preferences, the scene did not make it into the final cut.

Actually, I can tell you from being in the audience, there is no doubt that the inference was made, loud and clear. However, the response from the audience was groans, eye-rolls, and whispers of “cultural appropriation” from those who know the history and genetics related to those who created the Valkyrie myths.

While the current movie is doing well in the box office, I assert that it is because of the “toxic masculinity” of the lead actors (with a side of a deliciously evil Hela, wonderfully portrayed by Cate Blanchett). If the creators attribute the movie’s success to anything else—i.e. decide to transition Thor into being a woman and regenderizing and reracializing Nordic gods—I suspect they will find less success in the future.

Americans want to be entertained, not subjected to buffoonish social justice drama. Additionally, with all the news about the sexual assaults and harassment flowing from Hollywood, the moral authority of its stars. producers, and directors has been rescinded. Their lack of subtly has also become highly annoying.

Social justice warriors and their attempts to campaign against “toxic masculinity” are failing, bigly

It’s disturbing to me that it seems our society is increasingly raising more of the latter than the former.

And that is why so many young women complain that they cannot find men who want to get married. In fact, it’s hard for them to find GENTLEmen at all. I raised a gentleman and I’m proud of it- he knows to open doors, walk on the outside of the sidewalk, be respectful and to protect his women (mother, sisters, girlfriends). All of us appreciate the manly man he is and the gentleman he has become.

Stan Lee built an entertainment empire based on the insight that intellectual content will sell comic book to a demographic roughly characterized as 14-year-old-boys. Examples include the great themes of literature (sibling rivalry, Thor and Loki, and deeply complicated characters (Wolverine — an accident. Written by two different writers with hugely different ideas of the character, and a huge, partly-successful effort to reconcile those competing views.)

Dumbing the stories down to the anti-intellectual commie level destroys the premise of the entire franchise.

No it doesn’t. It screams sexual predator.

Spacey is young enough to still have a career in Hollywood. Takei is 80 years old, and his acting career has long been over, so he has nothing to destroy.

Shame about the Russians; I thought Sulu and Chekov were friends.

Not with that ridiculous accent Koenig gave Chekhov. Ouch.

It’s all great fun to dump on such a condescendingly righteous prig, but I don’t really see a clear statement by Takai that he did anything against anyone’s will. And that is the difference between aggressiveness and outright criminality. Stern may make it look like that, but he’s in the business of pitching hardballs to see them splash; they don’t always hit the right target, no matter how good the splash looks.

This is what happened to Marvel, and pretty much all other fun childhood series, when Disney took over. More white guilt and homosexuality for everyone!

BUT, when it comes to “sexual conquest and violence,” context is all.

Violence in the service of self-defense is a natural right, not “toxic masculinity.” Violence (and/or the credible threat to use it) is an essential part of police work and national defense: “People Sleep Peacefully in Their Beds at Night Only Because Rough Men Stand Ready to Do Violence on Their Behalf” (Kipling? Orsell?)

And who would deny that sexual competition engine that drives biological evolution?

Of course, sexual conquest and violence can also be criminal. But, the capability itself is not; surely whether these are “toxic” depends on context?

“People sleep peaceably in their beds at night only because rough men stand ready to do violence on their behalf.” -George Orwell

I am sick to death of all the “news” about celebrity sexual indiscretions. It is nothing more than puerile, titillating ENTERTAINMENT. Yes some careers will suffer but in the long run it will blow over, nothing will change.
I find it strange that so many of the individuals coming out of the woodwork to proclaim their victimhood have been victimize multiple times sometimes by the same individual. I am not referring to children or teen here but individuals who were adults at the time of the victimization. One has to wonder was the incident consensual at the time and in retrospect did not produce the intended results?

Funny how those men haven’t been accused of diddling little boys, eh?