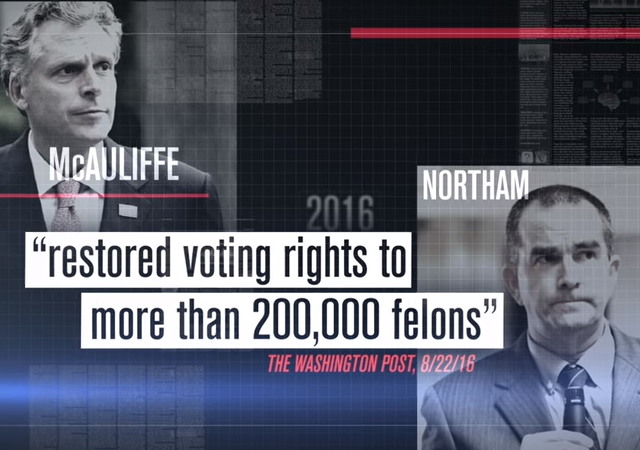 Democrats are very desperate to win the governor race in Virginia. They control the governorship of so few states at this point that another loss would be devastating. We recently pointed out how low they are going in order to win: Desperate Democrats Go Full Race Card in New Ad for VA Gov Race

As you may recall, Democrats in Virginia took another step to shore up the vote last year. Professor Jacobson wrote: Gov. Terry McAuliffe’s plan to restore the felon vote for Hillary in Virginia

Now it could all pay off.

But Virginians with criminal records might get the last word, because for the first time in a long time, a huge group of ex-felons will help pick the state’s next governor.

Virginia is one of four states that permanently disenfranchise people with felonies, even after they’ve served their sentences. While the state’s governor is allowed to restore individuals’ right to vote, last year Democratic Gov. Terry McAuliffe shocked conservatives by signing an order restoring rights to more than 200,000 people who had completed their sentences and parole.

Republican lawmakers successfully sued to block the move, arguing that he lacked authority to restore rights en masse. So McAuliffe’s administration started handing out the orders one by one; more than 168,000 ex-offenders have since had their voting rights returned. About 42,000 of them have registered to vote.

In the last governor race in Virginia, McAuliffe won by a little more than 50,000 votes. This block of felon voters could actually be decisive.

Ed Gillespie has released this ad in response:

Democratic National Committee chairman Tom Perez is confident the party will hold on to the Virginia governorship, but with the race closer than national Democrats would like, he tried to downplay any fallout if Lt. Gov. Ralph Northam loses.

“Virginia has a history of close races,” Perez said. “It’s a state where you’re always going to have close statewide elections, and this is no different.”

Perez pointed to other races within the Virginia House of delegates as an example of the “new DNC” which is focused on tickets up and down the ballot.

It’s still a very close race which suggests it could all come down to turnout.

Strange how the Dems always howl about the Republicans being criminals, but how the real criminal population seems to vote Dem.

I must agree with DNC wack-a-doodle Perez. Virginia has become so purple it is nearly impossible to see through the fog in order to accurately gauge the electorate, principley because the blue stench becomes overwhelming the closer one travels to DC.

As a Tidewater resident in VA, I have to sadly agree with all of this. It’s deep purple now and not looking to change, sadly…I hate the cancer of NoVA.

The Tidewater (Hampton Roads)area is just as blue as NOVA. Take a look at the election maps.

It’s a fair bet that they’ll vote, otherwise they wouldn’t have bothered to register. And it’s pretty obvious how the overwhelming majority of them will vote.

Note that federal mass pardons are perfectly valid; the VA court specifically acknowledged that, but found that the state constitution is more restrictive, and requires pardons and restoration of rights to be handed out one at a time.

i am a conservative and do not believe that felons who have completed completely their terms lose their constitutional privilege to vote.

what we DO need to do is have a law that people MUST provide ID when attempting to vote.
the greater danger is motor voter, where all people applying for a driver license are almost automatically enrolled to permit voting.

This isn’t a black and white issue, the nature and severity of the crime should all play a part in the punishment. Treason, for instance, easily justifies the permanent end to all voting rights.

“If you aren’t willing to follow the law, you can’t claim the right to make the law for everyone else.”
— Roger Clegg, president of the conservative advocacy group Center for Equal Opportunity

Don’t commit a felony, and you can vote.

There is no constitutional right to vote. (Seriously, look it up; it doesn’t exist.) It’s up to the state. Nearly all states do automatically restore the franchise to ex-felons. Some even let them vote in prison. But VA doesn’t, and that’s its choice.

The Second Amendment does not end with the words “except for felons.”

So, along with the restoration of the right to vote in Virginia, will these felons also be able to serve on a jury, serve in public office and keep and bear arms?

Sheesh, can’t you read? This has already been addressed in this thread. Yes, the governor has restored all rights to the people in question.

From the VA state site:

Anyone convicted of a felony in Virginia automatically loses their civil rights – the right to vote, serve on a jury, run for office, become a notary public and carry a firearm. The Constitution of Virginia gives the Governor the sole discretion to restore civil rights, not including firearm rights.

If our GOP Congressmen weren’t a bunch of liars and frauds, they would pass a law restoring gun rights to anyone that has their voting rights restored. End of problem.

The commutations the VA governor is handing out restore all rights, including guns. Hence Gillespie complaining of it in the ad embedded in this post.

So, you’re saying the governor of VA, or any other state, can override the federal gun laws prohibiting persons convicted of felonies from owning or possessing firearms?

I think you misunderstand federal law. Federal law says that if a state restores all an ex-felon’s civil rights, his federal firearms disability evaporates. The catch is that ALL the ex-felon’s civil rights must be restored. For example, in Massachusetts, after five years have passed, an ex-felon can obtain an FID card, which is good for ownership of ammunition, defense sprays, and long guns; but he cannot obtain an LTC card, which is good for ownership of handguns. Therefore, he cannot own a shotgun or rifle on his FID card because he is still federally disabled.

‘We can’t have the inmates running the prison.’

Not true. It’s up to the state. There is no constitutional right to vote; the franchise is a privilege and states are entitled to deny it to ex-felons if they like. VA likes.

It’s up to the state and the felon. If he doesn’t care enough to petition the state why should the state restore the rights?

The rights could be gone forever or not. But deprivation of liberty is not the only penalty or consequence of being convicted of a felony.

Unless a permanent deprivation of a civil right is an explicit part of a sentence, it shouldn’t be imposed.

Are Libertarian candidates simply not worth mentioning?

He’s worth mentioning, but he’s polling at around 4%. I guess we could add that, but it seems more relevant to focus on the two candidates polling at over 4%. Even if every single felon in VA voted for him, he cannot win, so why include him in a post about the VA race being tipped by felons?

In the last election, the libertarian candidate for gov polled about 6.5%. Without the libertarian, if 70% of those had gone to the rep candidate, the reps would have won. That’s a big %, but who knows? One can make a case that libertarians would feel more at home with the reps than the dems, so it’s a maybe. In some circles in VA, the libertarians have a reputation as spoilers who have no chance of winning, but who keep the dems in power in close contests.

No. Neither was Pat Paulsen or the naked guy. All are jokes. Some are funny some are not but they’re all jokes.

For those who don’t know, Douglas Wilder is the first black elected governor in VA and has the respect of both sides of the aisle. He is a senior statesman in VA, and carries a lot of weight among black voters. Recently he failed to endorse the dem candidate for governor, Northam. Northam’s campaign omitted the black candidate for lt gov from flyers it circulated in NOVA.

Wilder expressed some concerns earlier in the forum about Fairfax, who is also African American, being left off of Democratic gubernatorial candidate Ralph Northam’s campaign fliers last month in northern Virginia. He omitted Fairfax from the fliers at the request of the Laborers’ International Union of North America because the group had not endorsed him, the Times-Dispatch reported.

The Northam campaign has said that fewer than 15,000 Fairfax-free fliers were printed, out of 3 million pieces of literature in total, and only 1,000 of the fliers were distributed during door-to-door canvassing in northern Virginia.

I am guessing, but I think the failure to get Wilder’s endorsement will hurt the Northam campaign. If we are to believe the conventional wisdom, a disproportionate number of the ‘new’ voters will also be black.