Remembering the victims of the Manson cult

Remembering the victims of the Manson cult

“Before the murders, no one associated hippies with violence and murder, just drugs, peace, free love, etc.” 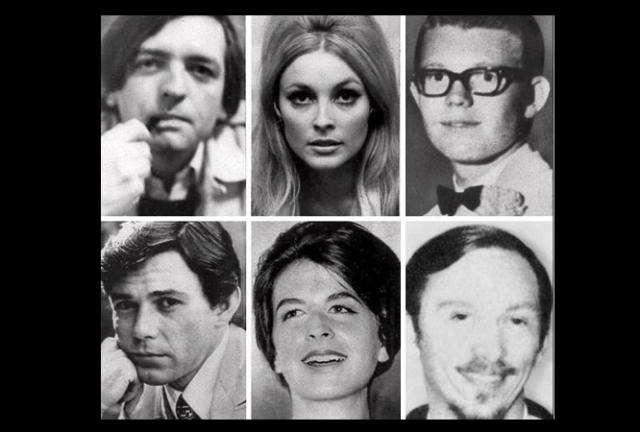 As a teenager, one of the books I recall reading during that formative phase in my life was Helter Skelter, written by killer cult leader Charles Manson’s determined prosecutor, Vincent Bugliosi, who won death sentences for Manson and his band of butchers.

The tenacious lawyer, who passed away in 2015, was interviewed by Time Magazine about his book in 2009 about his book and the country’s continued fascination with the cult. His explanation centered on the era in which the slaughters occurred.

I’m not aware of any other murder case in American history, other than the assassination of President Kennedy, where [anniversaries] are marked by television specials, news reports and articles.

Before the murders, no one associated hippies with violence and murder, just drugs, peace, free love, etc. Then the Manson Family comes along, looking like hippies, but what they were all about was murder. That was their religion, their credo. That shocked a lot of people and definitely hurt the counterculture movement.

I think the main reason for the continuing fascination is that the murder case is almost assuredly the most bizarre mass-murder case in the recorded annals of American crime. The Beatles were somehow involved. The killers were young kids from average American homes.

There were two TV movies made based on the book, a 1976 version and one in 2004. The ending of the 1976 movie is particularly chilling when Manson says, “I am already dead”:

Unfortunately not. Thanks to the Supreme Court of California’s ruling in the 1972 case of “The People of the State of California v. Robert Page Anderson“, Manson’s death sentence (as well as those of his followers) was converted to life imprisonment, and the stage was set for continuing drama to this day.

The cult leader lived for over four decades on the California taxpayer’s dime. And while Manson is now dead, killer Leslie Van Houten may be paroled and others are still using valuable oxygen. One of them, Tex Watson, became an ordained minister and fathered 4 children behind bars.

Manson’s recent death has many recalling the names and faces of the victims who were brutally killed by his drug-crazed followers.

Gary Hinman: Hinman, 34, was the first victim in a series of killings by the Manson “family” in July 1969. Hinman was a musician and had apparently sold “some bad mescaline” to one of Manson’s followers. Over the course of three days, Manson followers tortured him and then stabbed him to death.

Sharon Tate: Arguably the most famous of the victims, her death was especially heartbreaking because she was 8 months pregnant and begged her killers to spare her life for the sake of the unborn baby.

Steven Parent: Beside the unborn child, this 18-year old was the youngest of the victims. Parent was a recent graduate from Arroyo High School and worked two jobs, one as a delivery boy for a plumbing company and the other as a salesman for a stereo company. He was on the Tate estate to sell an alarm clock, as part of his job.

Jay Sebring: The 35 year-old hairdresser to the stars, who was shot and stabbed several times after protesting the Manson thugs’ treatment of Tate.

Leno LaBianca and Rosemary LaBianca: Leno, 44, and Rosemary, 38, were s killed the day following the Tate estate murders. They there home as selected at random, by Manson and several of his followers. Mercifully, none of the LaBianca’s 4 children were home at the time of the slaughter.

Donald “Shorty” Shea: Donald Shea, 35, was an aspiring Hollywood actor who worked wrangling horses at a ranch called Sahn’s Movie Ranch where Manson and some of his followers had lived at one point. Police raided the ranch to arrest Manson’s family on auto theft charges, which led Manson to suspect Shea had led authorities to their arrest. Manson then led his followers to kill Shea on Aug. 28, 1969. Shea’s body wasn’t found until 1977 when one of the Manson followers, Steve Grogan, told police where it was located.

While he lived, Manson enjoyed lasting attention from deluded fans. In fact, a group of his questionably sane admirers crowdfunded his funeral.

“Not only does Jason Freeman [Manson’s grandson] now have to worry about stepping up to the plate to ensure his grandfather’s remains are laid to rest with the honor, respect & dignity he deserves, but Jason must also bare [sic] the burden of covering all expenses.”

Debra Tate, Sharon’s sister, reminds everyone that those who actually did the killing cannot be forgotten.

However, Manson himself didn’t take the lives of our loved ones in those weeks of horror in August 1969. That was done at the hands of Patricia Krenwinkel, Bruce Davis, Bobby Beausoleil, Leslie Van Houten and Charles “Tex” Watson, all of whom are still asking us to forgive them for their lapse in judgment, as if they don’t have to be held accountable. I think not.

Let’s hope Manson’s remaining followers get continuing justice while on Earth, before they pass to receive the divine justice they deserve.

“Let’s hope Manson’s remaining followers get continuing justice while on Earth, before they pass to receive the divine justice they deserve.”

Apparently you either do not understand, or you do not believe, the Gospel of Jesus the Messiah.

I am not a theologian, but a practicing Catholic who loves her faith. I would appreciate no further disparaging remarks on the nature or quality of my belief system.

Per the Bible :
Restitution must be made before forgiveness is required.

They have made no restitution.

Unless your name is Father Edwin or Deacon Jim, I am not interested in this discussion. But bless your heart, anyway.

As the story of the thief on the cross shows, even if someone repents at the moment of death they can still be saved, for which we ought to praise God. (Luke 15:3-10)

I don’t know if Manson or any of his followers have repented and turned to God for salvation. It’s not for me to judge. If they have, then in heaven, we will rejoice and praise God together before His throne. If they haven’t, we won’t worry about them any more.

And if Father Edwin or Deacon Jim disagree with me, they can give me a call, I’m in the book.

My reply was to “gibbie”.

I did not intend to cause offense to you.

No worries, and thanks! 🙂

Wow! I obviously need to review my communication skills. I did not intend to attack anyone’s faith.

Please feel free to question mine, however. I might learn something.

Is discussion of religion forbidden at LI?

“Before the murders, no one associated hippies with violence and murder, just drugs, peace, free love, etc. Then the Manson Family comes along, looking like hippies, but what they were all about was murder. That was their religion, their credo. That shocked a lot of people and definitely hurt the counterculture movement.”

What hurt the counterculture movement was the treatment of these vile people as heroes, and the longstanding efforts to get them out of jail.

“At a 1969 “War Council”[6] in Flint, Michigan, Dohrn gave her most memorable and notorious speech to her followers. Holding her fingers in what became the Weatherman “fork salute,” she spoke of the bloody murders recently committed by the Manson Family in which the actress Sharon Tate, at the time nine months pregnant, was murdered and her unborn child died. Abigail Folger, heiress of Folgers Coffee and several other victims at two crime scenes were all brutally stabbed to death.[7] The words “Death to Pigs” were written on a wall in the victims blood.”

“ Dig it! First they killed those pigs and then they put a fork in pig Tate’s belly. Wild!” ”
This was a references to Leno LaBianca, found with 12 knife wounds and 14 additional wounds caused by a large fork. The word “war” was then carved into his flesh with a knife. When police arrived, the fork was still protruding from his body.[8] Dohrn continued:

“ Offing those rich pigs with their own forks and knives, and then eating a meal in the same room, far out! The Weathermen dig Charles Manson!”

This is the Bernadine Dohrn married to Bill Ayres, of “Guilty as sin, free as a bird!” fame.

They were planning a Revolution and the murder of 24 million Americans, before some of their followers blew themselves up in a townhouse explosion in 1970, and most of their support evaporated over night.

Let us never forget that Barack Obama launched his Senate campaign in the home of those two disgusting scum, Ayers and Dohrn.

As the saying goes, “Birds of a feather flock together.”

Obama is a CLOSE FRIEND of Dorn.
And Dorn still sits on Bar committees!

Bernardine Dohrn is a convicted domestic terrorist. As a disbarred attorney, Dohrn sits on important committees and boards of the American Bar Association, American Civil Liberties Union and is an Associate Professor of Law at Northwestern University, allegedly teaching children’s legal rights. She is also the Director of the Legal Clinic’s Children and Family Justice Center. Dohrn has been a prominent fundraiser for Barack Obama[2] and close family friend.[3]
http://www.conservapedia.com/Bernardine_Dohrn

They subscribed to a secular faith (e.g. twilight) and religious/moral philosophy (e.g. Pro-Choice that is selective, unprincipled, opportunistic, irreconcilable), which is historically and globally a first-order forcing of Catastrophic Anthropogenic Planned People. Their lives were prematurely aborted.

Mason’s gang of idiots were pikers compared to the serial killers, mass shooters and islamic terrorists infesting the nation.

If Sharon Tate wasn’t a sexy actress, no one would have heard of this story beyond Los Angeles.