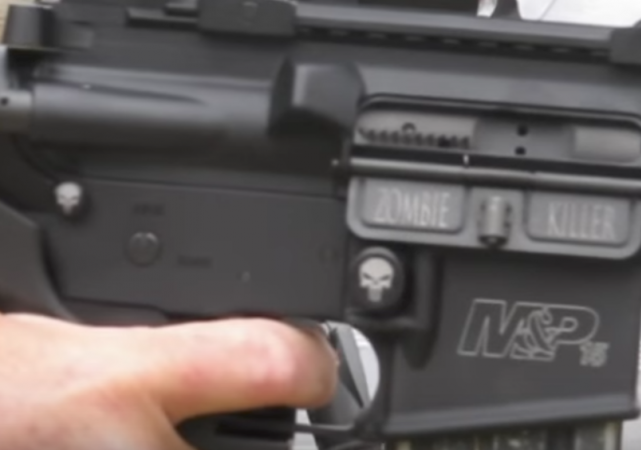 Following the massacre, lawmakers of all political stripes, gun control groups, and even gun rights groups like the NRA agreed the bump stock, which enables rapid fire shooting on some semi-automatic rifles, was not fit for public use.

But that was then.

Less than two months later (a veritable eternity in modern news cycles) and evil bump stocks are seemingly long forgotten. Where tragedy typically spurs prompt action, lawmakers and even the ATF have yet to take any action on bump stocks.

But no action has been taken by Congress. Instead, Republican lawmakers punted the responsibility to the Bureau of Alcohol, Tobacco, Firearms and Explosives, which in turn says it cannot regulate bump stocks unless Congress changes the law.

The only thing that has happened with bump stocks since the Las Vegas shooting is that a leading manufacturer of the device, Slide Fire, resumed selling them. Slide Fire had announced in the wake of the shooting that it was temporarily suspending sales.

Several retailers, including Walmart, removed bump stocks from their shelves. But other gun dealers reported that sales of bump stocks spiked after Las Vegas and some stores sold out of the devices quickly.

“We would like to take the time to thank all of our customers for their patience and support throughout this past month,” Slide Fire said in an email when the company began selling bump stocks again Nov. 1. The company did not respond to requests for comment.

According to the WaPo’s report, lawmakers are punting to the ATF and the ATF continues to kick the ball back to Congress. There have been letters back and forth, but typical government disfunction has killed any movement meant to restrict the bump stock.

These could have easily been banned or referred to the ATF for a more severe regulatory status if the legislation was narrowly focused, as I feel it should have been. Instead the Democrats threw a complete gun control bill that would have allowed another administration to have the ATF declare virtually all semi-automatics and Gatling guns illegal.
That is why it has not moved forward.

Bump-fire stocks are simply a way of making bump firing easier, something that is possible with just about any semi-automatic rifle.

Given the ATF has come down on the Akins Accelerator (and basically anything that does forward movement for you), they might be able to prohibit stocks which could easily accept a spring in the rear to assist with that, but those that do not, are simply cosmetic features.

Bump stocks are a DIY project. Any lunatic can do it:

The old Icarus Syndrome strikes again. The Dems lack the self-discipline to ask for only what they think is needed to resolve the problem at hand.

Please don’t use the shooters name. NONE OF THEM. You can refer to Vegas shooter or muslim shooter but don’t put their name up. That is what they want. Like the sandy hook shooter, they want a “place in history”.
And the ATF has classified a piece of STRING as a banned “weapon”. They could put bump stocks on the list if they wanted. No bills have pass becuz the socialists always insist on going for the moon. The bills that had been put forth would make ANY MODIFICATION ILLEGAL! Or if you built a AR yourself, you could never know if the ATF was going to show up and claim your AR “fired faster” than “designed”. “Faster” than what? Rounds per minute? Trigger pulls per second? It is of course just the next step in the socialists trying to disarm the U.S. citizen. Because as long as we are armed, they have no way to turn us from CITIZENS into SUBJECTS of their great socialist utopia, no matter how hard they try.

I was thinking about that… what if, we went in more of an explicit opposite direction. In the wake of the Bostom bombings, Greg Gutfeld of Redeye refused to use their names… instead calling them “shithead #1” & “shithead #2”.

What if we were to go a step further, and declare a unique pejorative for each actor, so that not only is their name not spoke of again, all they are called is something that they would have found unappealing in life.

But MA has passed a ban. You must get rid of them without state compensation. They are obviously evil and dangerous, so sell them in a neighboring state where they will apparently either become benign, or where we don’t care about their evilness.

Do we KNOW he used a bump stock? There have been many videos on YouTube comparing the audio of the weapon fired with an actual machine gun (M240? I don’t remember) and it matched.

Nope. They claimed to find some guns with bump stocks in the room. Personal experience has demonstrated conclusively to me that law enforcement can’t even be relied on to get clearly marked serial numbers right. Any confidence that these bozos can identify a bump stock by sight is insupportable.

And we don’t even know that the dead guy was the shooter. It’s all still conjecture. If any solid evidence has come to light, they’re keeping a pretty tight lid on it.

Got that one right. Had a nice chit chat with ATF years back when they called about one of my rifles being used in a drug crime. Wrong serial number. Also, during the illegal “Operation Forward Look”. Also… the actual gun not used in a crime… just in a safe at drug dealer’s house back when possession defined use.. until ruled illegal by courts.

““Fully automatic weapons have been outlawed for many, many years.”

That’s not true at all. Full auto’s are hard to get, but they’re not banned.

It’s cheaper – and easier – to make a bomb, or mow down a crowd with a trunk. Or set a building on fire. Or other crazy things terrorists allowed into this country are going to be doing regularly.

Citizens need to be armed to protect themselves from threats police cannot stop in time.

The LV shooter had all three. *thinking face*

So if he had used match grade ammo, would we banning that because it has an attribute that makes it deadly?

What about high grain ammo?

We forgot to ban pressure cookers after the marathon. Let’s talk about everything but the actual cause.

Cetainly lets ban them because otherwise everyone with an AR15 or similar rifle will become a mass murderer the instant they get one. How about lets ban congress!!

Good, blaming an inanimate objects for the actions of evil psychos is ignorant bordering on psychosis.

Did you know you can also bump fire an AR-15 or AK-47 by looping your trigger finger around your belt loop while holding the trigger down whilst simultaneously pulling forward on the forward grip with your other hand. Granted you’re shooting from the hip, but it’s still the same rate of fire as a bump stock. Do liberals whine about belt loops next?

Actually, you don’t need a bump stock to simulate automatic fire. One merely holds the rifle a half inch or so from your shoulder with your finger on the trigger but without gripping the gun with your trigger hand. Then push forward on the front hand guard with your other hand until the gun fires. The somewhat free recoil will reset the trigger, and the gun will fire continuously as long as you maintain forward pressure. YouTube is full of detailed film clips describing the process. Works for auto pistols, too.

You can make a bump stock with a rubber band. If you want to know how to do it, there are how-to videos on YouTube. You basically wrap it around something and hook it on your finger.

In addition, you can’t aim when bump firing. You can point the gun in a general direction.

At a 1200+ yard range and when firing from above that is enfilade fire and accuracy is not part of the scheme, the hail of deadly lead is.

It comes down to the fact that the LV shooter got his kill count DESPITE using a bump stock, not because of one. He was shooting for what, 7 minutes? Rapid aimed fire for 400 seconds would be far more effective and deadly than spraying into a crowd, past the initial hits.

A piece of plastic and a spring did not make him deadlier.