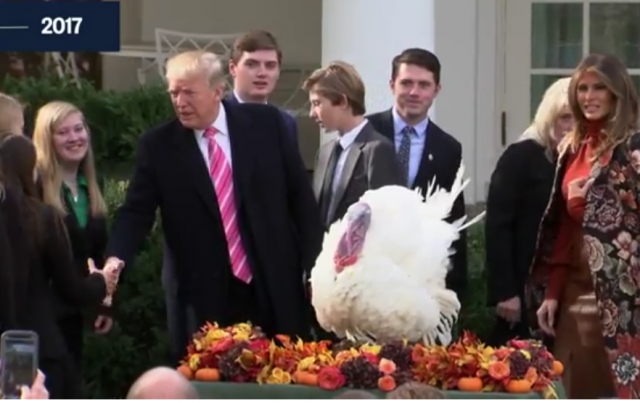 “I’m pleased to report that unlike millions of other turkeys at this time of the year, Drumstick has a very, very bright future ahead of him,” Trump said at the pardoning, with first lady Melania and son Barron standing by his side and many extended family members in the audience.

When he approached Drumstick for the pardon, he exclaimed, “Big bird!”

Today, we continued a wonderful American Tradition at the White House. Drumstick and Wishbone will live out their days in the beautiful Blue Ridge Mountains at Gobbler’s Rest… pic.twitter.com/fsS8B8f5UR

It seems there is quite the competition rule the roost as the National Turkey.

And the National Thanksgiving Turkey is… DRUMSTICK!

Drumstick — described as a classic 47-pound bird with a “tall and proud” strut — was dubbed 2017’s National Thanksgiving Turkey, besting Wishbone in an online poll, 60-40 percent.

Wishbone mounted a last-ditch effort for votes by making a surprise appearance in the White House briefing room earlier in the day. Ultimately, the political gamble did not garner any last-minute surge in the poll.

President Trump may heard the rumor that he nixed the pardon of Obama’s Thanksgiving birds. It appears he cannot.

After announcing that Wishbone and Drumstick will join the two turkeys that President Barack Obama pardoned last year, “Tater” and “Tot,” Trump joked that he is not allowed to reverse Obama’s turkey pardons.

“As many of you know,” Trump said, “I have been very active in overturning a number of executive actions by my predecessor, however I have been informed by the White House Counsel’s office that Tater and Tot’s pardons cannot under any circumstances be revoked.”

“Tater and Tot, you can rest easy,” he said to laughs.

President Trump and his family will be heading to Mar-a-Lago for the holiday.

I see no mention was made of pardons for the “turkeys” on Capital Hill. As for the rest of you, have a Blessed Thanksgiving, remembering the very many reasons we have to be grateful!

Alas, the pardon for our turkey came too late, and he will have to be compensated by a long morning, laying in a bed… of gravy. He will be long remembered, in cold turkey sandwiches for lunch.

A properly brandied fruit cake might offer some comfort and consolation, as well.

Newsweek is reporting that the turkey handlers wife’s second cousin is engaged to an Italian janitor whose grandmother coach for the Soviet troops as they invaded Germany.

Breaking news: the 9th circuit has just overturned the pardons.

Really need to end this nonsense.

If I were POTUS, I wouldn’t say a word about this crap and, instead, make a YUGE deal every Thanksgiving over how the Pilgrims starved for years while trying to live as a Commune and then prospered only after abandoning that failed model and adopting private property and free market capitalism instead.

Years? I thought it was just one terrible year. They were naïve, not stupid.

Funny to think of any of the Pilgrims as “capitalists” …