Tater, Tot, Abe, Honest, and Cheese may still live, but 5 policy turkeys and the mainstream media’s relevancy are quite dead. 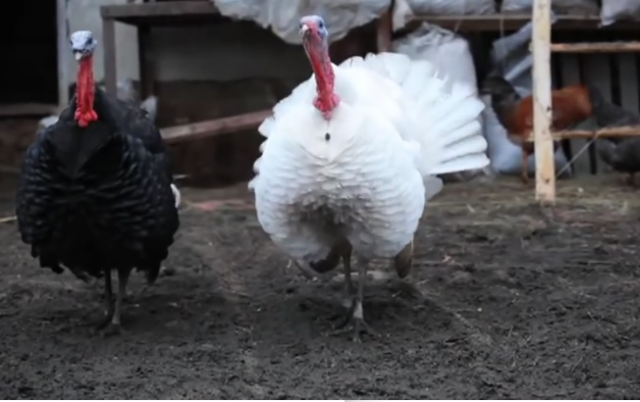 I thought a great way to start Thanksgiving week at Legal Insurrection was to talk turkey about the American press!

There is a #FakeNews article that has been circulating, which reports that President Donald rescinded the pardons of 5 Obama-era turkeys. Because the national media is quick to report false news about the Trump administration, the satire was accepted as reality by many. Eventually, snopes.com had to debunk the claim.

However, I assert there is more truth to the the headline than is found in typical mainstream media coverage. If one considers all the policy-based turkeys hatched by Barack Obama and his minions, then the news that Trump axed these birds makes complete sense.

That the media is ignoring or minimizing the successes is shameful.

1) The approach that certain kinds of blue collar “jobs aren’t coming back“.

The first clue that President Trump’s Asia tour was successful is that the press has been distracting its audience with Judge Roy Moore and Senator Al Franken. Selena Zito, the ace reporter who covered the rise of Trump among Blue State voters, has noted the the lack of serious coverage of negotiated Chinese projects that will bring jobs back to this country:

Last weekend in Beijing, as part of his 12-day trip to Asia, President Trump announced that the US and China had signed an $83.7 billion memorandum of understanding to create a number of petrochemical projects in West Virginia over the next 20 years.

If the agreement holds tight, it is an economic game changer for the state.

And yet, speaking to the locals here, you wouldn’t even know it had happened.

The locals were probably swamped with the latest D.C. morality drama.

Furthermore, the press failed to point out that whereas Obama was forced to exit the back of the plan when landing in Beijing, Trump got the red carpet treatment.

2) The policy of “containing” ISIS has been replaced with defeating it.

The Hindustan Times is reporting that the Islamic State group has lost 95 percent “caliphate” it declared three years ago in Iraq and Syria.

“More than 7.5 million people have now been liberated from ISIS,” [Washington’s envoy to the coalition, Brett] McGurk said in a statement, adding that the group’s finances are now “at their lowest levels to date”.

Again, media silence on this news…unless your a citizen of Hindustan.

Between stopping payment on millions for the United Nations “Climate Fund”, ending the “Clean Power Plan”, and extracting the United States from the Paris Climate Accord, Trump’s team certainly helped the fiscal climate of the nation. Perhaps a large part of the success can be attributed to EPA’s chief, Scott Pruitt, who has turned out to be a champion political pollution fighter:

EPA Administrator Scott Pruitt is a man who gets things done. Despite resistance from within his own agency and an environment lobby bent on stopping him, he’s doing his part to drain the swamp and return government to the people. He’s bringing what citizens demand of a federal agency: Transparency and reasoned, fact-based decision-making resting on sound statutory footing.

Despite the threats to his personal safety, Pruitt has worked diligently to create a healthy fiscal environment for America’s workers, with nothing but sneers and derision from the press.

President Trump is rolling back certain travel and commercial transactions with the island.

The president, who kept diplomatic ties with Cuba, said this summer that the U.S. will not lift sanctions on the island unless the government meets a series of benchmarks, including the release of political prisoners, free elections and the legalization of political parties.

Again, there is little media coverage of the post-Obama era Cuba relationship. However, it is interesting to note that Alaksa Airlines has become the latest air carrier to cancel its route to the socialist paradise.

Tater, Tot, Abe, Honest, and Cheese may still live, however I am am truly thankful that these 5 policy turkeys are dead.

The relevancy of the elite media is also dead. Proof comes in the form af a tweet by NBC’s Andrea Mitchell, asserting that press coverage and not social media swayed a Trump policy reversal:

Here’s the official retreat on trophy elephants: “President Trump and I have talked and both believe that conservation and healthy herds are critical. As a result…the issuing of permits is being put on hold as the decision is being reviewed.” Press coverage matters

Hint: If you have to remind people you’re relevant, your relevancy is probably dead.

Great article, Leslie. Thanks! Speaking of bringing jobs back to America, Trump’s threats to re-negotiate the automobile “country of origin” rules in NAFTA have already caused Mercedes to expand their Sprinter Van plant in Charleston. Winning!

Sometimes we have to take a step back and recognize that the sins of the MSM are not just “fake” news or distortions. Sometimes the worst thing they do is to not report things. People cannot make decisions without the facts.

That’s not to say that many don’t need or apparently want facts, they just regurgitate talking points. Thinking people always want facts because without them no honest decision can be made. JMO

When I heard on the news this morning that the turkeys to be pardoned were named Bo and Tie, I began to laugh. I imagined the President announcing the turkey’s names as Hillary and Barack and he was pardoning them for their crimes against Thanksgiving. I could only imagine a tweet on that. OK Humor break over. Lets see how the MSM politicizes the Pardons.
Happy Thanksgiving LI team!

That would be a radical innovation. I’m surprised that the Dems are pushing such a thing as even a possibility. Once a thought like that enters the public consciousness, there’s no telling what those rascally voters might want.

So much of the Dem political agenda depends on any political outrage they can achieve—by any trickery and no matter how transient it would be in a sensible world—being permanent and irreversible, either by law, by custom, or by simple inertia. This concept is a direct threat to that.

Someone should suggest to Trump that he pardon a plastic turkey, just to remind people of that ridiculous episode, which originated not on any satirical site but in the most serious and constructive news organs, with all their layers of editors and fact-checkers.