That time the NYT fancied itself a governing entity 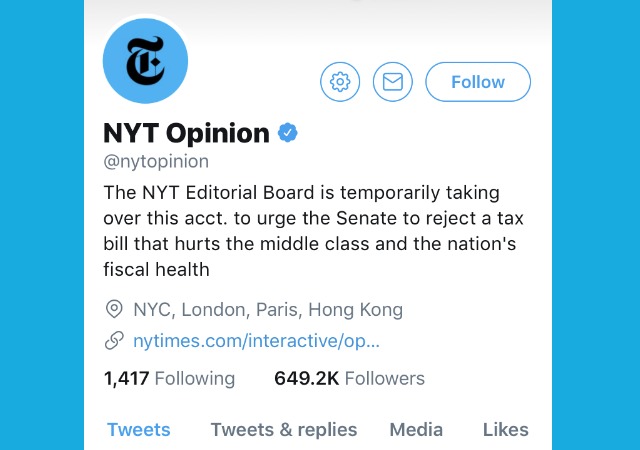 Media outlet or political organization? And where does the New York Times fit here?

Wednesday, the NYT turned their opinion-devoted Twitter account into an activist page lobbying against the tax reform bill passed by the Senate Budget Committee Tuesday. 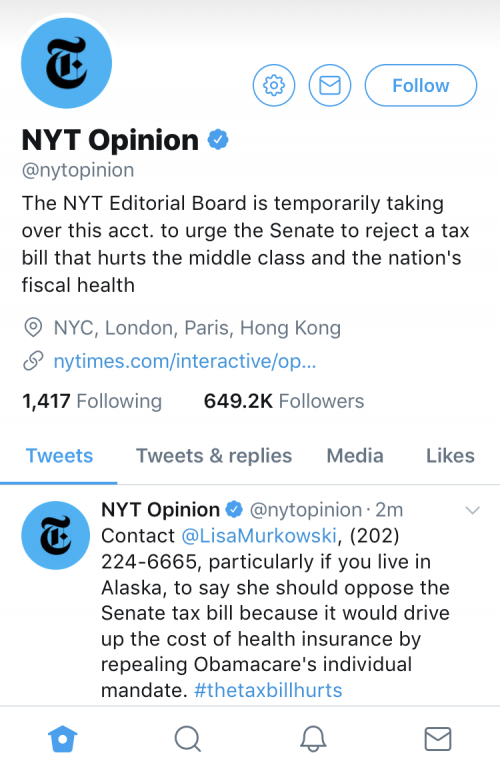 Using the hashtag #thetaxbillhurts, the NYT encouraged readers to contact Republican Senators who have yet to commit to voting for the bill.

This morning, the Times editorial board is tweeting here to urge the Senate to reject a tax bill that hurts the middle class & the nation's fiscal health. #thetaxbillhurts

Contact @SenJohnMcCain and @JeffFlake, particularly if you live in Arizona, and tell them to oppose the tax bill: It would add more than $1.4 trillion to the deficit over 10 years without helping the middle class. #thetaxbillhurts
Flake: (202) 224-4521
McCain: (202) 224-2235 pic.twitter.com/PvXI1b3Xd4

The @nytopinion Editorial Board has been tweeting about the Senate tax bill all morning. Will you be hurt by it? Tell us how using #thetaxbillhurts

Any temporary tax cuts for the middle class would be more than offset by the higher cost of health insurance — a good reason to vote against the tax bill. https://t.co/oSSXZ7H1H3 Tell your senators today: https://t.co/0AtZRQGvM5 #thetaxbillhurts pic.twitter.com/jqjW6cFbuJ

Thank you for listening to the Editorial Board on why #thetaxbillhurts, and alerting the Senate to your concerns. We're now back to regular programming here, with our mix of op-eds, columns, videos and more.

After receiving a just amount of criticism, at least one NYT writer defended the publication’s decision to play DNC communications staff for a day:

It is the job of editorial writers & editorial boards to advocate for policies we agree with and against proposals we don't. That's what we were doing on @nytopinion today.

And it’s a fair point. While publications do publish opinions, those posts are typically concluded with some sort of blanket, italicised disclaimer stating the opinions published therein are not representative of the opinions or values of the publication itself. It’s certainly not standard practice to use an opinion section to lobby for legislation. And of all things, the tax bill? Really?

The role of the fourth estate is simple: publish facts and allow voters to draw their own conclusions. But as we’ve discussed at length, the political press corps increasingly sees itself as a collective body entitled to take an active role in the crafting of legislation and in so doing, governing rather than reporting.

I just hope they start sending emails to their subscribers that start with "Patriot," although perhaps "Comrade" would be more appropriate.https://t.co/Xr42Mk9pOr

I get the difference between opinion and editorial, but it's still quite jarring to see a New York Times account tweeting like a Democratic Party organization https://t.co/uQ2sNiVgzy

The Times is too arrogant to realize it, but the more they take off their mask of “journalism” the more they help Trump and Conservatives in general. It now takes very little effort to discredit the media, they simply discredit themselves.

They NYT is about 20 trillion dollars late.

That said, hopefully, the Republicans realize that reform is not merely the end of redistributive change.

Between this crap and Lauer you really have to wonder what the academic standards are to learn how to become a reporter.
What is it, over 20 years Lauer has been a perv? And how many column inches have been devoted in the past to his history as a womanizer? And all with approval and not one interested “reporter”.
I’d guess even birds whose cages are lined with the tripe from this putrid publication would want out to do their business somewhere reputable.

Best comment I saw on Matt Lauer today: “Wow, who would have guessed that the guy with the automatic door lock/rape button hidden under his desk would have been guilty of sexual harassment?

Most important than any academic standards is one’s resume as a toady of the left. Pervs, molesters and traitors may apply, and be excused from their acts if they continue being a toady.

Hanoi Jane Fonda comes to mind. How that woman didn’t wind up on the other end of a rope after her treason during a time of war… And Swamp Sessions wasn’t even the attorney general then. Amazing.

Can someone speak to legality of this, specifically hasn’t the NYT crossed the line into advocacy and lobbying here?

Don’t they now need to comply with campaign finance regs, and register as lobbyists?

Swamp Sessions will get right on it