Heads to Senate floor, which means changes could still happen. 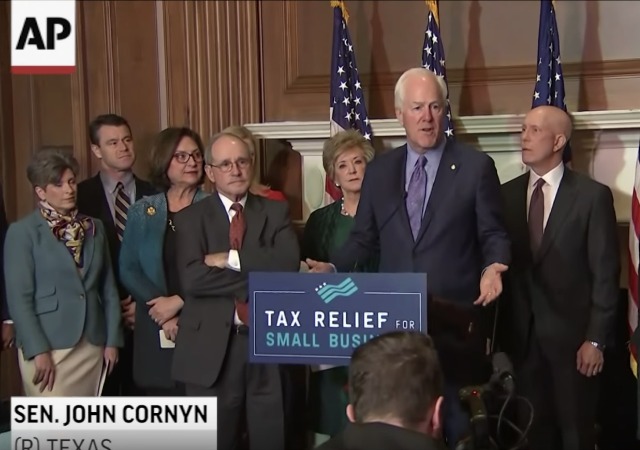 The senate tax bill conquered its first hurdle when the Senate Budget Committee passed it along party lines, 12-11. This also gives some optimism for it on the senate floor since two GOP senators who had hesitations on it voted yes in the committee: Sen. Bob Corker (R-TN) and Sen. Ron Johnson (R-WI).

The Senate could vote on the bill as soon as Thursday, but it should happen by the end of this week.

Just one GOP senator on the panel would have had the power to block the bill given the majority’s one-vote margin in committee.

GOP committee member, Bob Corker of Tennessee, said he reached an an agreement with Senate tax writers on a broad outline for a revenue trigger provision that he and other GOP senators are seeking. He has sought a “backstop” that would create automatic tax increases if the tax bill doesn’t spur strong economic growth as Republicans have promised.

However, the bill that the Senate votes on may look completely different than the one the committee passed:

After the Senate Budget Committee voted to send the tax bill to the Senate floor, Trump told reporters that there would be adjustments to the legislation. He spoke during a meeting with Majority Leader Mitch McConnell and House Speaker Paul Ryan that came several hours after Trump addressed Republican senators on Capitol Hill.

The meeting was “somewhat of a lovefest,” Trump said. “They want to see it happen.”

As of now, the bill permanently cuts the corporate tax rate to 20% and reduces “individual rates and double the standard deduction until 2026” whole adding $1.4 trillion to the deficit the next 10 years.

It also includes “the Finance Committee’s tax measure with the Alaska drilling proposal from the Energy and Natural Resources Committee.” This may have been a tactic to bring in Alaskan Republican Senator Lisa Murkowski. She has been a GOP senator that has gone against her own party with Obamacare repeal attempts and confirming Betsy DeVos as education secretary.

Support in the Senate?

Sen. Steve Daines (R-MT) was another that said he wouldn’t back the bill, but Senate Majority Leader Mitch McConnell and other leaders spoke with him privately about his concerns over the pass-through businesses. An aide told The Hill on Monday:

“Sen. Daines has concerns with how the tax bill looks at Main Street versus large corporations,” an aide told The Hill. “The senator wants changes to the tax-cut bill that ensure Main Street businesses are not put at a competitive disadvantage against large corporations.” The aide said the senator “remains optimistic and is continuing to work with colleagues” on changes.

Sen. Cory Gardner (R-CO) wants to add an amendment that will “make marijuana businesses eligible for tax breaks.” That makes sense since Colorado has legalized marijuana.

Sen. Susan Collins (R-ME) still may be a problem. Like Murkowski, she voted against the Obamacare repeal attempts this year. She isn’t too pleased with the tax bill, but has plans. From Bloomberg:

Republican Senator Susan Collins of Maine has said she backs two provisions in the House bill — retaining an individual income tax deduction for state and local property taxes, capped at $10,000 a year, and keeping the existing top individual tax rate of 39.6 percent for those making $1 million or more. The Senate plan would cut the top rate to 38.5 percent.

Collins may also insist on eliminating the bill’s repeal of the Obamacare mandate that most individuals get insurance or pay a penalty.

Collins also hoped “to pass a bipartisan bill that would extend payments to health insurers to offset the cost of subsidies for low-income consumers” before the Senate even touched tax legislation. From Politico:

“If it is going to be included it’s essential that we mitigate the impact on premiums,” Collins said. “That includes passing the Alexander-Murray bill and also a bill that I have with Bill Nelson that would protect people with pre-existing conditions. And yet lower premiums through the use of high risk pools.”

The moderate senator also said she wants the top individual tax rate to remain at the current 39.6 percent, restore the state and local tax deduction on property taxes to aid those in high-tax states, and make the child care tax credit refundable “so it would help lower income working families.”

The Senate cannot lose more than two votes. If they have Collins and Murkowski they could be set. The Hill listed these senators that remain uncertain:

Sen. Jeff Flake (Ariz.) — “I remain concerned over how the current tax reform proposals will grow the already staggering national debt by opting for short-term fixes while ignoring long-term problems for taxpayers and the economy,” Flake said in a statement. “We must achieve real tax reform crafted in a fiscally responsible manner. I look forward to working with my colleagues during a full and robust debate on the Senate floor to deliver on that goal.” Flake is retiring after his term.

Sen. James Lankford (Okla.) — Lankford said in a Nov. 27 news conference that he would like to support the bill but has concerns about the debt.

Sen. John McCain (Ariz.) — McCain praised the Senate Finance Committee for moving the bill through regular order, but has also raised concerns about the impact on the deficit.

Sen. Jerry Moran (Kan.) — Moran told constituents over the Thanksgiving recess that he has “encouraged the leadership” to drop the repeal of the individual mandate and questioned the bill’s impact on the deficit. Moran also raised concerns about a provision of the House bill that would tax qualified tuition waivers as income.

The Hill still has Johnson as no and Corker as uncertain, even though they voted for it in committee. There is a chance they could vote no on the floor, especially if they don’t get the changes they want.

Thanks for the summary, Mary. Isn’t it amazing that the dems are planning on being the “We hate tax cuts” party? What ever happened to the democrat party of the working man?

Jeff Flake – “I remain concerned that if this passes, Trump might actually be given some credit for pushing it forward, and I cannot allow that to happen in any way.”

I’m watching this with full expectations that Jeff Flake and John McCain will get into a fist fight on the Senate floor over who gets to cast the deciding ‘No’ vote.

As of a few minutes ago, the headline on DRUDGE REPORT with a link to a New York Times article, involved the claim that it is now down to McCain. And that the bill involves several things where he has previously voted against the Republican Party happily. From the moment that a tax bill became an active subject of conversation, I have said that there ain’t gonna be one. To the Republican Party it is far more important to defecate on their voters and President Trump than to keep any fraction of their promises. They believe that they will be re-elected no matter what, but even if they aren’t; they want to lose one or both Houses of Congress and be able to claim that nothing is their responsibility. To them, the power and bribes involved in being a kept opposition are worth destroying the country. They do not realize that when the Democrats next take over, that the GOP will be like the Old Bolsheviks after Stalin took power. And will meet a similar end.

“The moderate senator also said she wants the top individual tax rate to remain at the current 39.6 percent, restore the state and local tax deduction on property taxes to aid those in high-tax states…”

‘Moderate’ is just another word for ‘RINO,’ Bobby McGee, but I digress.

I actually think reducing, capping lower, or out right eliminating property tax deductions is a good thing. It will put the sting of high taxation in leftist autocracies like NY, Cali., Illinois, etc. high on the minds of voters in those states, who will then dump their ire into the laps of greedy, local politicos & their cronies, and possibly force a change as to how those localities tax their constituents.

No pain, no gain, yet something has to give – particularly when high property taxes prop up ultra leftist organizations like the Teachers Union, who use local taxation as its own political slush fund to kill school choice and cherry pick candidates.

A tax increase on top of a softening economy? Isn’t that sort of a “The beatings will continue until morale improves” move?