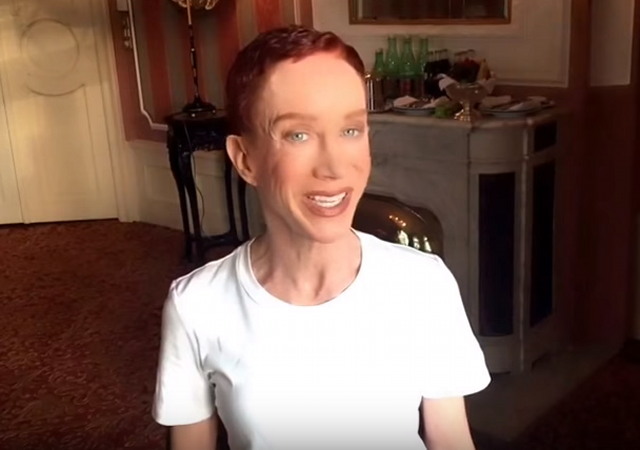 Remember back in May of this year when “comedian” Kathy Griffin thought it’d be funny to hold up Trump’s severed head in a photo shoot? #TheResistance: Kathy Griffin Holds Decapitated Trump Head in Photoshoot

It turns out that decision hasn’t worked out well for her career. Who could have guessed?

Griffin is currently on tour in Europe but recently published a video on YouTube in which she claims she has no work lined up in the U.S. when she returns.

Kathy Griffin: I’ve Been Blacklisted And ‘Forces’ Are Against Me

In the clip, Griffin complains she is being blacklisted in the U.S. and says no one wants to have her on television anymore…

“I just want to be honest,” Griffin said. “As far as what we’re going through and hoping this is a turning point for feminism and women’s equality, I just want you to know that at 57, for me it’s not a marathon, it’s a sprint,” she added…

“I just want you guys to know I’m fully in the middle of a blacklist,” Griffin said. She continued, “I am in the middle of a Hollywood blacklist. It is real. I am not booked on any talk shows.” “When I get home I do not have one single day of paid work in front of me,” she added.

Griffin later veered off into borderline paranoia saying, “There’s a lot of forces coming against people like me that are trying to do something.” She added, “I mean, look at Harvey Weinstein hired Kroll…and some company called Black Cube to, like, follow Rose McGowan. So, you know, I’m kind of assuming I’m next. I’m already on the Interpol list and all this other stuff.”

Whether or not Griffin has truly been blacklisted will become apparent when she returns to the United States. What we do know is that she recently sold her house in the Hollywood Hills for less than the original asking price which suggests she may have financial difficulties.

After more than a year on the market, beleaguered insult comedian Kathy Griffin, wrapping up a world tour, sold “Wings,” her former mansion in the Hollywood Hills for $4,492,500, substantially below the original asking price of $5.495 million but still a small fortune above the $2.85 million she paid for the dramatically sited residence in the spring of 2004.

The three-story, elevator-equipped mansion, behind gates and positioned high above the street with panoramic canyon views, has five bedrooms, six bathrooms and six fireplaces in 8,098 square feet.

what does Nelson mean ?

It’s a reference to the character Nelson on The Simpsons, who frequently gives a sing-song “Ha-ha!” at other people’s misfortunes. Yeah, I’m deeply cultured that way.

thanx – i ‘live’ on the internet and don’t have a TV so I am slow on the uptake.

notamemberofanyorganizedpolicital in reply to 4th armored div. | November 21, 2017 at 1:12 pm

the fact that Griffin thought that she would get kudos for implicitly threatening a POTUS showed her misunderstanding the bounds that still existed.
this behavior worked in NYC with the play showing the stabbing of DJT, but was not a way to have mass approval.

Hey Kathy….want to hear about REAL blacklisting….talk to a conservative in Hollywood

Consequences Kathy. Consequences. You had every right afforded under our constitution to do what you did. And we have every right to reject your grotesque political humor. You should have stuck with real humor instead of stupidity.

You seem to have gigs out of the country. Maybe give that some more thought instead of thinking the public ‘owes’ you something.

Leftists are nurtured in safe spaces. Consequently, when they finally feel a strange experience called “accountability,” they whine and blame others.

My gosh. She looks like a cross between Annie Lennox and Boy George in that pic.

With a touch of Seanade O’Connor. Not a good look.

Yep. Or the Joker.

Hey What did Lennox or George ever do to deserve to be compared to her?

The “black list” she’s referring to is called “taste”.

And about flucking time…!!!

Pffft. She’s not hurting; she’s spoiled. Selling a house for less than initially asked is hardly in indication of dire distress. It’s how most real estate is moved. And she’s not actually strapped for work. She just wants easy stuff like TV, and is too lazy to go back to the hard work of the club circuit.

And her basic problem, that she’s not basically funny, isn’t insurmountable, either. The club circuit keeps “entertainers” of her level alive; the market’s not all that fussy, since the audiences are usually tanked and any drivel seems uproarious.

The paranoia shtick is mildly funny, maybe. She should work on that a bit … maybe add a little mild slapstick. Drunk audiences like slapstick; it’s simple and easy to follow.

Hey, thanks for sharing, but you yourself, and NO ONE else, put yourself in the middle of that blacklist. NO sympathy.

In the “middle” of a blacklist? Too bad, I would have thought she belonged nearer the top.

You beat me to the obvious question. Who is on top?? Rosie Odonell or Helen Genaris. I mean of the list.

“If you want to be happy for the rest of your life, never make a pretty woman your wife, so from my personal point of view get an ugly girl to marry you” Jimmy Soul 1963 🙂

Adam and Drew had about 15 minutes on her the other week. It was very telling that she’s “not well” and clearly lacks anyone close enough to her to get her the help she needs.

Not giving her a pass, but she is a person in need of help.

Nah, she’s just a raging brat in need of some very tough love.
She needs a job in a factory, department store, or the like. That’ll bring her back to reality.

You’re not “blacklisted”, you’re washed up.

Just angry that after all those decades in Hollywood she’s unable to make a single sexual harassment claim.

“Just angry that after all those decades in Hollywood she’s unable to make a single sexual harassment claim.”

^^^ Infinitely funnier than everything she’s ever done or said in her entire life!

So, were those pics from the mansion she just sold?

Some consequences, my heart bleeds for her… /s

I am not even going to watch the clip. No clicks for Kathy, however indirect.

Kathy is a grown woman who has participated in a particularly ugly tactic by the Democratic Party at the national level, to make violence against Americans, and assassination of their President, acceptable.

I can understand how she made that mistake. Both the Clinton Campaign and the DNC embraced these unAmerican tactics during the last election, and remnants of both continue to attempt to drown out, dehumanize, beat and intimidate Americans on the basis of party affiliation.

Elizabeth Warren even went so far as to wish that someone would “disappear” DJT. The DNC paid travel fees for rent-a-rioters, and John Podesta with his crew co-ordinated the activities of rent-a-rioters.

Thank God the American voters, including large numbers of nominal Democrats, saw through this foolishness. Too bad Kathy did not.

All she needs is a bowtie and she’d be a twin of Peewee Herman. Nevermind, Peewee Herman is much funnier than this hack (no pun intended).

Thanks for letting us know, Kathy, I couldn’t have had better news from your camp!

Kathy discovers nobody wants to hire a totally disgusting person.

I suspect her “blacklist” has more to do with trashing Anderson Cooper and Ryan Seacrest in a recent interview than with displaying a severed Trump head.

Quick! Somebody post a picture of her mud flaps

“Just angry that after all those decades in Hollywood she’s unable to make a single sexual harassment claim.”

Just waiting for the claims against Griffin. It was just part of a comedy skit.

RE: the mentally “not ok” aspect of this.

Kind of makes me wonder about how many other unhinged people are mentally “not ok.” Not to devolve into the trap of calling liberalism a mental disorder, but a lot of people with mental disorders/psychosis of some sorts express TONS of deep hatred toward conservative values.

This extends even to family members (or public van pool / co workers etc) who in polite company froth at the mouth over Trump or Palin. To allow an object so disconnected from your sphere of influence to cause so much visceral anger and emotion is just not….sane behavior.

I worked in psych for 10 years and I can tell you the reason. Liberals and mentally ill have one huge trait in common..the need to avoid personal responsibility for their actions.

“The voices made me kill him” (mentally ill) vs “His standing in society is to blame for his crimes not him.” (liberal). See the connection?

I often wondered how seemingly intelligent liberals act like fools. Now I got it.

P.S. Dang I thought she looked bad with long hair, but the short hair is a whole new level of ugg.

sincerely,
the rest of us

I here a dollar goes a long way in Portugal.

If there is no mortgage, then she has more than $2.4 million after paying taxes on the appreciation since buying. At least I think CA will let her have more, and I don’t know if she can exclude the $250,000 Fed one time exemption – but it would be a drop in the bucket of $2.4 mil capital gain.

She ought to be in prison for it.

She could “perform” her “act” for her fellow inmates.

” Insult Comic ” – closer to the truth than “Comedian”, but really she’s a “vulgarian”.

Someone ask me if I care.

Who are the “you guys” she is referring to? Does she actually have fans? Before her al Qaeda impersonation, I was vaguely aware of her as a comic more annoying than funny. I can’t imagine that there would be enough “fans” to start a fan club.

Still boycotted? Excellent!
Thanks for letting us know, thereby raising the feel-good index!

She was never funny.

LMAO it looks like an undertaker did her makeup for her! She looks like a corpse! Does she still think people care enough about her to conspire against her? Lol, just like Amy Schumer. No talent hag.