Today Israel marks a national day to remember the departure and expulsion of Jews from Arab countries and Iran.

The commemorative day, which was designated by Israel’s legislative body three years ago, comes as a belated recognition of the collective traumas experienced by between 850,000 to 1 million Jews who were expelled or who fled from their homes in the Middle East and North Africa over a span of three decades (from the 1940s until the 1970s).

Today we mark the annual memorial Day for the expulsion of Jews from Arab lands & Iran.

850,000 Jews were forced to flee from their homes and to leave the countries where they had lived for millennia, solely because of their Jewish identity.

On Jewish Refugee Day, we look back at what used to be, and we remember the #Jewsof48, those 850,000 #JewishRefugees from the Middle East and North Africa who left everything behind. WATCH: https://t.co/Ny0D5QIWe0 pic.twitter.com/sipog5BZBU

Thriving Jewish communities—many of them centuries old—were literally wiped out during these years as Jews were subject to arrest and draconian anti-Jewish laws, and their properties and assets either seized or destroyed (some experts estimate this loss in property to be approximately $350 billion).

Fact: Land stolen from Jews in Arab countries equals nearly five times the entire size of the state of #Israel pre-1967. To this day, no reparations have been made.#JewishRefugees #Jewsof48
More: https://t.co/k5HujArqjH pic.twitter.com/qH4fwlSSV2

In Iraq, Syria, Lebanon, Yemen, Libya, Algeria and Iran, violence against Jews quickly followed, either instigated or tolerated by the authorities. The hostilities led to waves of Jews being uprooted, with many having to leave everything behind to run for their lives—often with nothing other than the clothes on their backs.

We provided detailed coverage of the story of these Jewish refugees in a post back in November of last year, November 30: Commemorating departure and expulsion of Jews from Arab and Muslim lands.

As we discussed, while the world has focused on the Palestinian refugees, few are aware of the forgotten exodus of Jewish refugees or the suffering that these Sephardic/Mizrachi Jews experienced on account of unhinged hostility toward Zionism and the very creation of the state of Israel. Watch below the series of short video clips produced by StandWithUs, shared via social media over the last several days, to get a full sense of the terrible, often horrific, experiences of these Jewish refugees:

Remembering the stories of Jews from Arab countries and #Iran today: This is the story of Persian Jews. #JewishRefugees #Jewsof48 pic.twitter.com/EyeMdN8Mrk

Remembering the stories of Jews from Arab countries and #Iran today: This is the story of Lebanese Jews. #JewishRefugees #Jewsof48 #Lebanon pic.twitter.com/b8HJEWdehF

Remembering the stories of Jews from Arab countries and #Iran today: This is the story of Moroccan Jews. #JewishRefugees #Jewsof48 #morocco pic.twitter.com/2wCawhx2z2

Remembering the stories of Jews from Arab countries and #Iran today: This is the story of Yemenite Jews. #JewishRefugees #Jewsof48 #Yemen pic.twitter.com/ecMBgfYOB2

Remembering the stories of Jews from Arab countries and #Iran today: This is the story of Algerian Jews. #JewishRefugees #Jewsof48 #Algeria pic.twitter.com/pWLE9WpUkG

Remembering the stories of Jews from Arab countries and #Iran today: This is the story of Tunisian Jews. #JewishRefugees #Jewsof48 #tunisia pic.twitter.com/fifzuMfdNO

Remembering the stories of Jews from Arab countries and #Iran today: This is the story of Libyan Jews. #JewishRefugees #Jewsof48 #Libya pic.twitter.com/82TKluiLNa

You can also read in our post about how Jews were subjected to pogroms, systematic violence, and persecution. As we wrote, no Jewish community in the Middle East or North Africa was spared the repressive abuse, but some were hit harder than others. 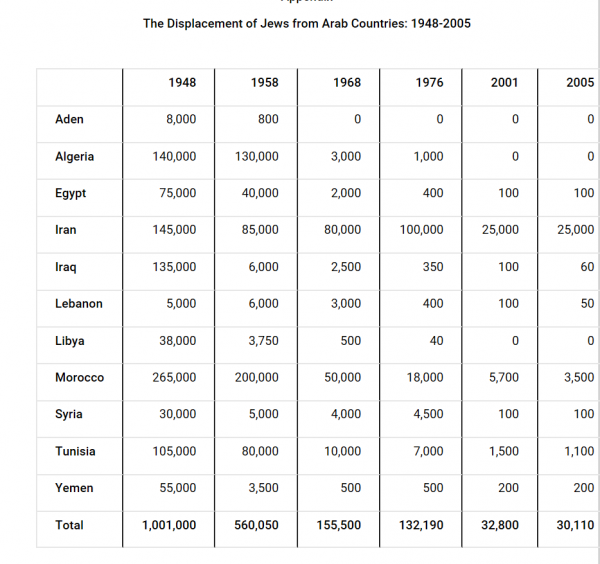 This was really one of the biggest humanitarian crises of the 20th century. But not a single Arab state or Iran has ever formally acknowledged the Jewish refugees and the lost property, much less been held accountable for their crimes.

“The history of persecution of Jews in #Arab countries is an undeniable fact, yet we see no hint of an international community willing to address it…” #JewishRefugees #JewsOf48 @GippersChutzpah @ShaharAzani https://t.co/5ExD5YtxFt

Remember the Jewish refugees from Arab countries. Sadly, no recognition or reparations have been made by any Arab states. pic.twitter.com/IWSZBagwk8

In our prior post, we highlighted why it’s important to acknowledge this tragic but little-known chapter in Jewish history.

Specifically, we pointed out that increasing awareness of the “forgotten Jewish refugees” from Arab states and Iran, along with their right to compensation for losses incurred, could advance the goal of achieving peace by underscoring the error of a one-sided presentation of the refugee problem—in which only Arab Palestinians are said to have experienced displacement and loss. 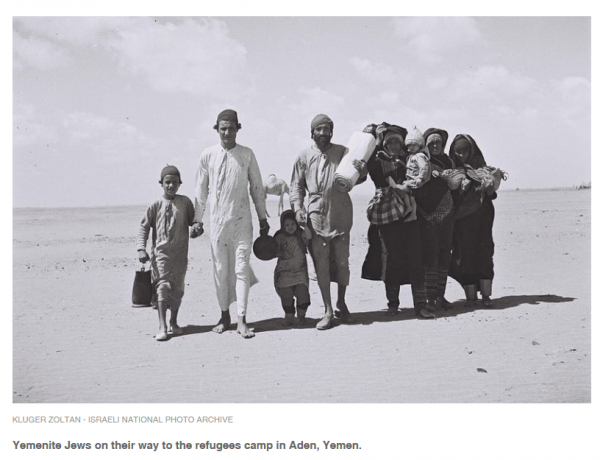 As we noted, the one-sided presentation is in fact a big part of the reason that an Israeli-Palestinian peace remains elusive, because it’s helped to nurture the Palestinian narrative of an exclusive victimization, which in turn feeds hard-line policies, violence, and the rejection of reasonable compromises.

In addition, we wrote that recognition of how Jews were forced out of their homes would be helpful for setting the record straight about the Jewish experience in Muslim-majority countries:

Among the more pernicious misnomers about the history of the Middle East is the claim that Jews lived well under Muslim rule (unlike Jews in Christian Europe). A better understanding of what happened during the Jewish departure and expulsion would help people to better understand the entire experience of Jews in the Muslim and Arab world, rectifying some commonly-held fallacies and misrepresentations.

It’s true that there was no equivalent of the Holocaust of European Jewry. It’s also true that there were time periods and places in which cooperation between the Arab and Muslim majority and the Jewish minority took place. There were Arabs and non-Arab Muslims who saved Jews and their property during the Holocaust.

While these stories deserve to be told, the reality is that Jews never enjoyed full and equal rights in countries under Muslim rule. Jews were treated as second-class citizens (dhimmis) and violence against Jews—horrific pogroms and religious persecution—also occurred.

Indeed, the precarious nature of Jewish life in the Arab/Muslim world is precisely what eventually made possible the horrible Jewish exiles from their homelands in the Middle East and North Africa during the Jewish departure and expulsion.”

But we neglected in our previous post to mention at least one more reason for remembering the demise of Jewish communal life in Arab lands, and for commemorating the remarkable absorption of these hundreds of thousands of desperate refugees into the young Jewish state: discrediting the insane claims that Israel is a white supremacist country in which Jews of color are oppressed and denied rights.

Such crackpottery, as we’ve noted in many posts, is increasingly dominating the messaging and programming of virulently anti-Israel groups in the U.S., such as the incongruously named Jewish Voice for Peace. Their arguments would be severely damaged and weakened, though, if more people were to know about the tragic stories of anti-Jewish discrimination, persecution and the expulsions from the Arab/Muslim Middle East—and how these Sephardic/Mizrachi communities have thrived in the Jewish state.

As noted in a recent excellent op-ed focused on Israel’s November 30 commemorative day by Haisam Hassanein, an Egyptian fellow at the Washington Institute for Near East Policy, after initially experiencing the kinds of hardships that many immigrant and refugee communities the world over face,

today the landscape has changed as Israeli society becomes more inclusive. Eastern Jewish culture is honored. Intermarriage between Ashkenazim and Mizrahim is a nonissue. The Mizrahi Jew Avi Gabbay heads the Israeli Labor Party, the current main opposition party and historic domain of Ashkenazi Jews going back to the Zionist ideologues of Europe…The successful absorption of Jews from eastern countries in Israel—across linguistic and cultural barriers—is a modern-day success story that deserves to be remembered, celebrated and emulated.” 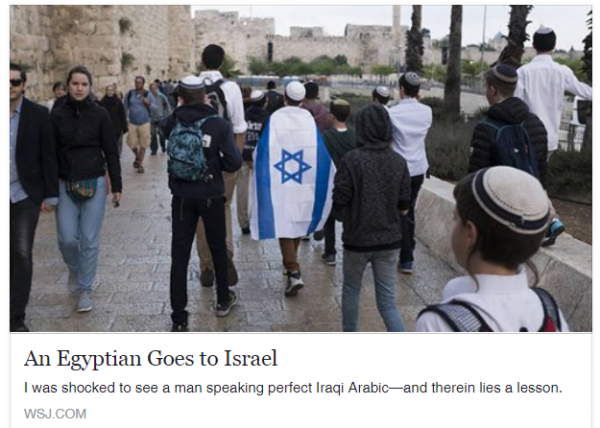 Bottom line: Acknowledging the destruction of Sephardic/Mizrachi Jewish life in the Arab world and highlighting how it was remarkably and successfully transplanted in Israel would help to undermine the falsehoods about Israeli society that are increasingly dominating the discourse of Israel’s detractors.

No one should deny the Palestinian refugee problem.

Palestinians who were placed in refugee camps by the United Nations in 1949 and who have been deliberately kept there generation after generation have suffered enormously. Even those who don’t live in camps face astonishing degrees of discrimination as non-citizens (such as is the case in Lebanon, where as we noted in a recent post, Palestinians continue to be mistreated).

Despite sharing a common language, religion, and ethnic roots, the Arab/Muslim world has shamefully neglected their Palestinian brothers and sisters—after ridding themselves of their Jews.

That’s yet another reason to acknowledge the ethnic cleansing of Jews from Arab lands and how these refugees “miraculously built flourishing lives” in Israel. It could be a way to finally begin the long-overdue process of securing Palestinian refugees the justice that they’ve been denied by other Arabs.

Thank you for highlighting this issue. The numbers of Jews and Arabs displaced in 1947-48 were more or less equal. The difference is that the Jewish refugees were absorbed into other countries, mainly Israel, and started new lives. The Arabs, however, have been kept penned up in “camps” which are really slums because their Arab neighbors refuse to accept them.

I would add that huge numbers of other ethnic groups were displaced in the aftermath of WWII. German-speakers pushed out of Eastern Europe were absorbed into German-speaking areas farther west. I know personally some Hindus whose parents were pushed out of Pakistani Punjab, and remember that one million people died in that partition. In no case other than the Mediterranean Arabs is there any talk of repatriation or the “right of return.”

Great article. We should never forget. I’m sad that these silent atrocities continue in the middle east today. I’ve never understood why there is not more of an outcry.

Jewish refugee day? Shouldn’t we be celebrating by bombing a collection of mud huts back into the stone age?