Egypt: Gunmen Kill Over 200 at Mosque in Sinai Peninsula

Egypt: Gunmen Kill Over 200 at Mosque in Sinai Peninsula

The peninsula is a hotbed for terrorist attacks. 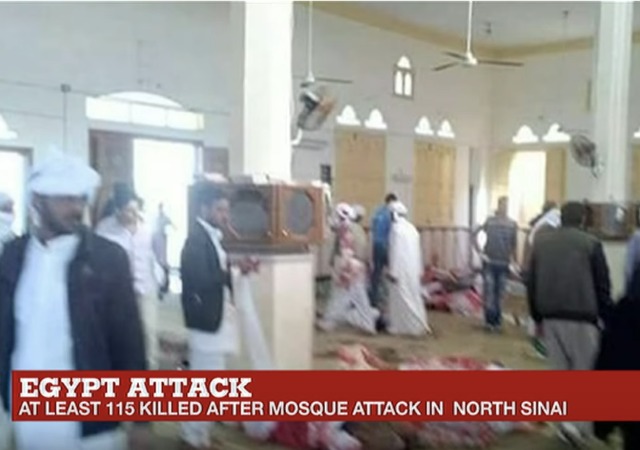 Gunmen with explosives killed over 200 people at a Sufi mosque in the Sinai Peninsula in Egypt. From Fox News:

The extremists launched an attack on the al-Rawdah mosque in the town of Bir al-Abd, some 25 miles from the North Sinai provincial capital of el-Arish, Egypt’s state news agency MENA reported. The attack appeared to be the latest by the area’s local Islamic State affiliate.

It was the largest single attack targeting Egyptian civilians and the first on a large mosque since the militants began their campaign of terror in 2013, the AP said.

Police said extemists in four off-road vehicles bombed the mosque and fired on worshippers during a sermon at the al-Rawdah mosque in the town of Bir al-Abd, located 25 miles from the regional capital of el-Arish.

The militants stopped people from escaping by blowing up cars and leaving the burning wrecks blocking the roads, police told the AP. 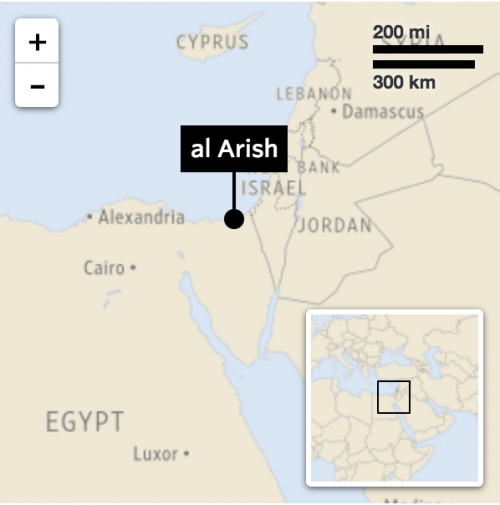 No group has taken responsibility. The Islamic State has an active arm in the peninsula. The locals told the media that the mosque identifies with “Sufism, a mystical branch of Islam dubbed heretical by extremists.” The mosque is believed to be the “birthplace of Sheikh Eid al-Jairi, a Sufi cleric considered the founder of Sufism in the Sinai peninsula.”

But this is the first time that worshippers inside a mosque have been targeted. The number of victims is unprecedented for an attack of this type.

Northern Sinai has been living under a media blackout over the past few years. No media organisations have been allowed to go there, including state-sponsored ones.

The frequency of attacks raises doubts about the effectiveness of military operations. While the army releases statements every now and then, claiming victory in some parts of Sinai, there seems to be no end in sight to the ongoing battle between the army and militants.

So the chickens have come home to roost?

When Islamic terrorists run out of Kaffir to murder they turn to killing other Muslims who are the ‘wrong’ sort of Muslim. Conquest and violence are their only reasons for living.

Does this have anything at all to do with Islam?

I thought this kind of attack didn’t happen in other countries.

Also, end of politicizing it: thoughts and condolences to the victims and their families.

Sinai was typically very tolerant, but not any more. The extremists were centered in Northern Sinai due to its proximity to Gaza. It is getting worse.

If they do this to each other brother Moslems–imagine what they would do to us infidels !!! דמד

“Sufism, a mystical branch of Islam dubbed heretical by extremists”

More lies about Islam. That Sufi’s are heretics is dead-center mainstream Islam. That heretics (which the Quran calls “apostates”) should be murdered by good faithful Muslims is dead-center mainstream Islam. The Quran and Hadith are 100% clear on this matter. We should not be surprised mass murder is dealt to Sufis by other Muslims, rather we should be more surprised when it isn’t.