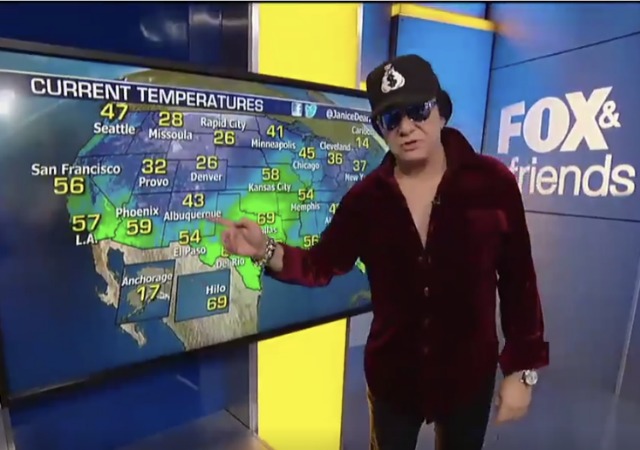 KISS frontman Gene Simmons has been a regular at Fox News for the past years, but after his antics this week, that will change. The Daily Beast reported that the network confirmed it has banned Simmons from the premises for life:

Fox finally had enough of Simmons after he crudely insulted female Fox staffers, taunted them and exposed his chest, and otherwise behaved like the “demon” character he plays onstage. Management was not amused, and Simmons’s photograph was promptly posted Wednesday at the security entrance of the company’s Manhattan headquarters along with a “do-not-admit” advisory.

It all started on Wednesday when he appeared on Fox Friends and Mornings With Maria to promote his new book:

Things seemed to be going well enough when Simmons jumped up from the Fox & Friends couch to help meteorologist Janice Dean do her weather report—a delighted Dean later posted video on her Twitter feed—and then sat on a panel with Bartiromo, who asked his views on the Harvey Weinstein sexual-misconduct scandal.

“The lunatics have taken over the insane asylum when respected business entities such as yourself ask guys that like to stick their tongues out,” Simmons answered, “what I think of Harvey Weinstein.”

“Okay, I’m a powerful and attractive man, and what I’m about to say is deadly serious,” he continued. “Men are jackasses. From the time we’re young we have testosterone. I’m not validating it or defending it.”

Okay, that doesn’t seem too bad, right? Things went off the deep end behind the scenes:

According to a knowledgeable Fox News source, Simmons showed up on the 14th floor to do a book-plugging interview with FoxNews.com’s entertainment section, but instead barged in on a staff meeting uninvited.

“Hey chicks, sue me!” he shouted, and then pulled open his red velvet shirt to reveal his chest and belly, according to the source. Then he starting telling Michael Jackson pedophilia jokes, and then bopped two employees on the head with his book, making derisive comments about their comparative intelligence according to the sound their heads made when struck.

“It was pretty severe,” the source said.

After Simmons’s misconduct was reported to a supervisor, and then to human-resources executive Kevin Lord, the Kiss frontman was permanently banned from the building and will no longer be permitted on any Fox News or Fox Business Network programming.

Simmons has often appeared on Fox News due to his conservative views. Back in 2010, he admitted he is “very conservative” and regretted voting for President Barack Obama.

The Israeli-born musician also captured the attention of conservatives for his pro-Israel views. In 2011, he lashed out at those who boycott Israel:

“I’m Israeli. I’m a stranger in America. I’m an outsider,” he said, speaking in a hotel lobby across a valley from the walls of Jerusalem’s historic Old City. “I was born here and I’m proud of it.”

He said artists who avoid Israel – such as Elvis Costello, the Pixies and Roger Waters, who joined the movement after appearing in Israel in 2006 – would be better served directing their anger at Arab dictators.

“The countries they should be boycotting are the same countries that the populations are rebelling,” he said. “People long to be free … And they sure as hell don’t want somebody who’s a ruler who hasn’t been elected by them.”

Simmons has also often told entertainers not to talk about politics “because he believes entertainers are not qualified to speak about such matters.”

Gene Simmons is a right plain doofus idiot. His music sucked and the only reason they ever made it big was because of their ridiculous make up and clothing. Who ever cares what he says. I don’t care that he claims to be a conservative. I consider my conservative and I’ve had a pretty interesting life but I wasn’t wacked ou on drugs for most of my life.
Wow, if Fox thought that Charles Manson was a conservative would they have brought him onto their network?
And I really am serious about how terribly awful Kiss music was. I cannot listen to it. It is similar to having pepper spray in my eyes.

I enjoyed Kiss , went to a concert in San Antonio, great show and danceable music… Most artists are a bit out there but I am Surprised he did this at Fox. Always good to have a few entertainers that are not left leaning and anti Israel…

As long as he didn’t grope anyone or take his pants off, they got what they paid for. They knew they weren’t hiring Mitt Romney.

Heck, the description of what happened sounds pretty mild, all things considered.

Having NEVER watched a KISS video, been to a concert, or even listened to their music unless it was just on the radio, who in America has never seen Simmon’s chest and belly?

While I appreciate that I would find it weird in an office setting, how is it “lewd”?

you’re right and i overreacted in my comment – this behavior is typical of his onstage persona and since he was there pushing a book, maybe he thought that this was a joke and would help sales.

he must have been high and did a lot of harm to the causes he supposedly defended.

how do Religious Jews and Israel supporters recover from the damage that he has done ?

he is conservative ??? don’t think so, he is a pig and his views about Frum Jews/Israelis are also bigoted.

Gene Simmons needs to resign from the Senate.

Seriously? Banned for life… for being Gene Simmons. He barred his chest and belly! He told Micheal Jackson jokes! He bopped a couple of heads with a book AND LAUGHED! OMG! Eleventy!

Seriously folks…. what is going on here? I just don’t get it. Sounds like office environment that is completely converged and pathetic. Gene is better off never going there again.

So Fox news HQ/offices are like 10 year old girls having tea parties where everything is just so and according to script… and then a yucky boy shows up with some fish he caught and a cup of worms and a frog and he starts making jokes.

“So Fox news HQ/offices are like 10 year old girls having tea parties where everything is just so and according to script… and then a yucky boy shows up with some fish he caught and a cup of worms and a frog and he starts making jokes.”

So he’s old and grumpier than usual that day. Big deal.

Gene Simmons is a little too large to jump up and down on a table or couch live on the air like the leftist darlings. Going over and playing with the weather forecaster is done all the time by various personalities. I’m sure walking around the offices after being on the air and barging into offices was all about giving himself more profile with the people at FOX. Now he has a hell of a lot more exposure. He will turn the overreaction at FOX into interviews all over the place.

Seems to me like it was a pretty damn funny stunt. Unfortunately it would appear the crazies with no sense of humor have taken over at Fox News. The feminist chick mafia has them all running scared of their own shadows.

Whether Simmons behavior was inappropriate or not is largely up to FOX, it is they building and staff. Banned for life? Well, maybe if he was hit by a buss while leaving the building. Otherwise, we have to wait and see just how “permanent” permanent turns out to be.

But, let’s get down to basics. If some clown hits the guy next to me on the head, I’m going to deck him when we raises the book in my direction. And, I’m liable to deck him AFTER he hits me, if I am the first person struck. Instead, these people apparently let this continue and then went and tattled to their superiors when it was all over. If there are going to be standards of behavior, they have to be enforced when the violations are occurring, not at an unspecified later time.