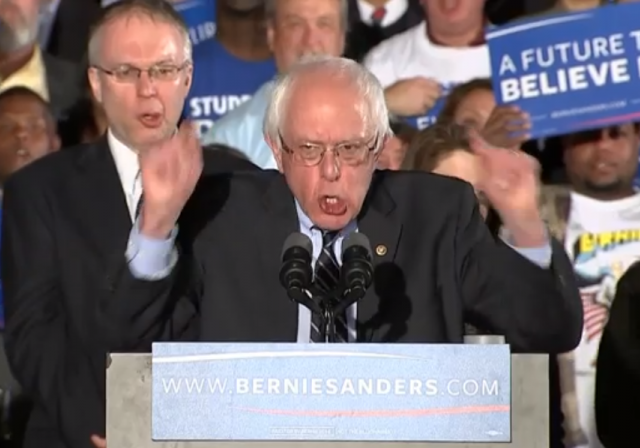 Democrats and many people in media mocked the GOP for having 17 candidates in the 2016 Republican primary. Now that the Clintons are out of the way however, Democrats are expected to have a massive field of candidates in 2020.

Amie Parnes writes at The Hill:

How Dem insiders rank the 2020 contenders

Democrats predict that as many as 30 candidates will compete in their party’s presidential primary in 2020.

And while it’s still too early to say who might come out on top, buzz is building around some potential candidates, even as other hopefuls fade to the background.

A year after a devastating 2016 defeat, Democrats are craving new faces with fresh ideas. Yet many of their leading contenders for the White House in 2020 are politicians who have been around for decades.

There’s also no clear standout in the potential field.

“You have a bunch of Celine Dions but there’s no Beatles,” said Phil Singer, a Democratic strategist who served as press secretary on Hillary Clinton’s 2008 presidential run.

The fortunes of potential candidates can change quickly. Sen. Al Franken (D-Minn.), for example, was regarded just a few weeks ago as a potential dark horse candidate in 2020, but that changed instantly when sexual misconduct charges surfaced against him.

Parnes singles out six names that came up when Democratic insiders were asked about the race.

The problem the Democrats face is that the only people with national name recognition will be senior citizens by the time the election rolls around.

Matthews asked Brazile about possible candidates like Sen. Bernie Sanders (I., Vt.) and Joe Biden, who are 76 and 75, respectively, and wondered if there should be an “outer age where you’re just too old to run” for presidents.

“Chris, I predict tonight that there will be literally over 25 people who will consider running for president,” she said. “Perhaps Joe Biden, Bernie Sanders.”

notamemberofanyorganizedpolicital in reply to Conan. | November 27, 2017 at 2:19 pm

This is the “Splitter” strategy all over again.

Nope. There will be an expensive death match between the Marks (Zuckerberg and Cuban). Zuckerberg will probably spend $2B on the primary, but will lose narrowly to Cuban.

…Democrats are expected to have a massive field of candidates in 2020.

Hey, there are a lot of flavors of crazy in the Dimocrat party!

They’ll want at least one of each flavor.

Will the media call the large field of LibDem candidates in the 2020 primaries a “clown car” as they did to the GOP contenders in 2016?

As much as I wish Trump was not the president, he looks like superman compared to this list! Sherrod Brown? Kamala Harris????? Are you kidding? Fauxohauntas? The living dead Sanders? Felon McAuliffe? Corrupt Coumo? The list is a stand up comic list.

Purchase stock in popcorn companies. This should be a real hoot.

It will be a Commie Lib free for all with not an actual Democrat in the mix. They are wanting “new ideas”…bull feathers! They want new faces with new ways to sell very old ideas in new ways to fool ignorant voters into buying the centuries old failures.

Unlike the GOPe, The Party is very tightly controlled. We don’t know exactly who controls it, but we can see that someone does. He’ll run whoever he chooses, and the Press and—especially—the voters will have no say in the matter. The candidate will be someone of no distinction in his own right, someone easily manipulated. Billy Jeff, though a basically intelligent man, was so completely consumed by his desperate need to dominate and abuse women that he had no time available in his day to do anything else, like plot world conquest. Obama’s overweeing arrogance and his lack of any real talent or ability was what made him an easy subject for manipulation and control. Hillary’s obsessive greed was (and of course still is) her Achilles’ heel.

But controllability is useless without a controller. Look for a handler. Obama’s handlers were, first, Michelle, when he was just in the farm leagues; later as he approached the big time, the primary job was taken over by a bigger gun, Jarrett. Hillary’s controller was, obviously, Huma. Bernie the Red didn’t have a controller, but of course The Party had—and has—no intention of running him for President, so a controller would be superfluous.

The future candidate will be either moderately intelligent but lazy and unfocused, or just plain stupid. The handler will be much more intelligent—intelligent enough to hide it most of the time. The handler will most likely be of recent foreign origin, and probably trained as a lawyer. (No, this does not make all immigrants, or even all lawyers, suspects.)

All of these names bandied about as candidates are suitable nobodies. But we can’t predict just who The Party will try to inflict on us until the eminence grise appears.

Everyone thinks that THEY can beat President Trump just like HilLIARy thought she could beat him. But I predict that by the time 2020 rolls around President Trump will be re-elected in a landslide!!! If we can get the voter registration rolls cleaned up, and get voter ID in all States so that only legal American Citizens can vote. As per our Constitution. Which, by the way, is how every other country in the world works. Non Canadians can not vote in Canada. Non Mexicans can not vote in Mexico – which also, by the way, is a much poorer country than ours but they must show id and proof of citizenship to vote! WOW what a concept! So liberals, you reason for not wanting it, because people can’t afford an id is total BS!

Trump will easily beat any lame Dem in 2020.

The interesting presidential election will be 2024.

Hopefully the Swamp is well purged by then. There might be Rs or Ds with better principles. Maybe… maybe even new parties.

Love the picture of Bernie! It so captures the essence of Socialism and Socialists.

Wow.
I find this amazing.
Bernie Sanders was the hand-picked, Clinton and DNC approved,
—Guaranteed to lose— Primary Opponent for Hillary.
And then it back-fired.
Then they actually had to buy him off, or threaten him enough to go away.
And, he isn’t even a Democrat!
Now look the mess.

Hey, it’s a dang good thing they got out from under him, because he could well have won in the General.

notamemberofanyorganizedpolicital in reply to snowshooze. | November 27, 2017 at 2:30 pm

Yes, Sanders was the Clintons’ hand-picked Pied Piper to draw in all the crazy Occupy Wall Street Protesters to her.

It says volumes about the current state of the Democratic Party that their odds on favorite to win their party’s nomination is not only a full-blown and self-proclaimed socialist (now think Venezuela) but openly and affirmatively disclaims allegiance with the party!