Hotbed for al-Qaeda and Boko Haram. 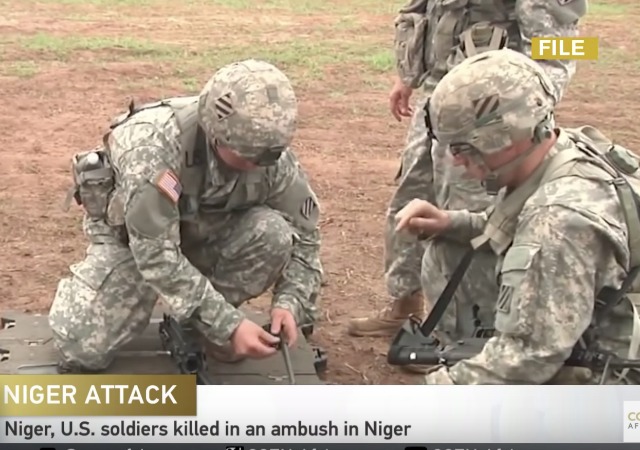 The United States Africa Command confirmed that three Army Special Forces soldiers were killed in Niger on Wednesday night after they were ambushed. Two other U.S. soldiers were wounded while Nigerian forces lost five soldiers. The command released this statement:

Names are being withheld as part of the next of kin notification process.

The command center did not reveal many details, The Washington Post reported that the local media claimed “that the joint patrol was lured into an ambush” and they described the attackers “as coming from Mali, where al-Qaeda’s North African branch has been battling both the government and a French-led coalition seeking to root them out of their desert hideouts.”

These deaths are “the first known hostile-fire casualties in Niger.”

The U.S. have flown the wounded to Landstuhl, Germany, and officials said they are in stable condition.

No one has claimed responsibility for the attack.

Why Are We In Niger?

Back in February 2013, former President Barack Obama told Congress that the defense department “deployed about 100 troops to the West African nation of Niger to conduct unmanned reconnaissance flights over Mali and share intelligence with French forces fighting al Qaeda-affiliated militants.”

Al-Qaeda took over most of northern Mali in 2012, but help from the French military squashed them out. However, some cells remain and inflict terror in the region. Niger has also had to deal with Boko Haram terrorists that have crossed over from Nigeria.

It also turns out that the U.S. is currently constructing “a $50 million drone base in Agadez, Niger” that will allow drones to travel closer to southern Libya and monitor extremist groups like the Islamic State. From The New York Times:

Since 2013, unarmed American drones have soared skyward from a secluded military airfield in Niamey, starting surveillance missions of 10 hours or more to track fighters affiliated with Al Qaeda and other militants in Mali.

Over the years, MQ-9 Reapers that have been based there stream live video and data from other sensors to American analysts working with French commanders, who say the aerial intelligence has been critical to their success in driving jihadists from a vast desert refuge in northern Mali.

And to those narcissistic NFL players

Don’t forget a big FU to CBS VP and lawyer Hayley Geftman-Gold, who would have otherwise enjoyed our deaths:

Too bad we can’t send Geftman-Gold and the NFL America-haters abroad to fight forces trying to kill us, instead of paying them obscene amounts of money to destroy our way of life.

How many lefties knew Obama had the Army and SOPs in Africa for years? They didn’t care to notice and the press was VERY compliant on keeping it on the down low.

None of our folks should be risking their lives for this. I hope the President asks for a review of this whole Africa adventure.. and I wish we’d frankly get out. Just get out of there. ( if it needs to be done, let the Africans PAY for mercenaries to fight for them and train them… and screw that airbase idea. Just a footprint we’d have to defend and a excuse to dump billions into Africa paying ppl off ).

Sorry, but Niger is strategically critical for US interests in North Africa.

Niger provides access, mainly for drone recon and the occasional drone strike, to Libya, Algeria, Mali, Nigeria and Chad. All have active Al-Qaida and ISIS forces operating within their borders. Niger is currently providing extremely useful intelligence to the multi-national forces operating in these countries against Islamic terrorists. And, we are doing it on the cheap.

The US has a number of personnel who service and operate the drone fleet, currently based outside Niamey. These are all rear echelon personnel and are at little risk. A new drone facility is being constructed at a more centrally located location to improve the efficiency of drone operations. SF is active in the country mainly in a training role with Nigerien forces. Why an A-team was operating with Nigerien forces near the Mali border is not known, at this time. It may have been for training purposes or it may have been for intel collection purposes.

SF does not get the publicity that units such as the SEALs receive. But, their jobs are usually longer, dirtier, nastier and just as dangerous.

Fair enough, and thanks for the reply. I’d really rather not be over there though. I’d prefer a stoic and serious assessment of our aims in N. Africa. A mission creep? We’re training and running missions… have been for years. I don’t like it though. We need to get out of the World-police role…IMO. ( and I’m sure that has ramifications )

Much of the world is unstable. And, the less advanced the country, usually the less stable it is. It is in the short term interests, and most of the long term interests, of the USA to help maintain that stability. This leads to some ideological conflicts.

Take Libya, for instance. Qaddafi was a disgusting totalitarian thug. And, freedom was largely non-existent within Libya while he was in control. However, once he was removed from power, we were faced with the reality that the results were worse than Qaddafi. By both tacit support and actual support, we [the US] encouraged the removal of Qaddafi. This created a vacuum into which radical Islamic organizations moved. The same thing happened when the US began assisting Syrian rebels, many of whom are, or are affiliated with, radical Islamic organizations. The destabilization of Syria, allowed for the rise of ISIL/S and the vacuum created by the US withdrawal from Iraq allowed it to expand into that nation. That is why we are in Niger, to the extent that we are. To attempt to maintain the stability of the region at a low cost to our nation.

The Nigerien uranium mining industry might also have something to do with our desire to have a presence, no matter how minimal there as well.

So completely foreseeable, in destabilizing N. Africa, then we need bigger footprint … in Africa. Hillary and Obama went waaay out on a limb and decided to overthrow Egypt, Libya, Syria and they helped Tunisia and tried and failed with Jordan. This was all tied to inflating the Muslim Brotherhood in the area. Also, the coup we initiated in the Ukraine added to the mix. It was all a giant foreign policy fail that lit the world on fire, alienating long allies and giving a hand to sworn enemies or totally corrupt entities. One thing leads to another. Thank GOD Gen Sisi overthrew the MB in Egypt and started the unraveling of the whole scheme.

So, with the exposure of America’s hidden wars… As if people actually believed that social activism alone was sufficient to overcome violence… We can now have an honest conversation about: war, what is it good for, and other unpleasantries, including the partisan origin, and bipartisan support of wars through the 20th and 21st centuries. As well as dispel the illusion of “clean” wars and humanitarian relief created through such policies as CAIR (catastrophic anthropogenic immigration reform).

We still have SF actively engaged in Somalia after 25 years. None of the many active wars we are engaged in is winnable. All of them consume lives and materiel and achieve nothing. It is mere arrogance that makes our military leaders persist in this nonsense.

As to needing bases in Niger to support our drone wars, those drone actions themselves are war crimes, and the personnel engaged in those operations are war criminals.