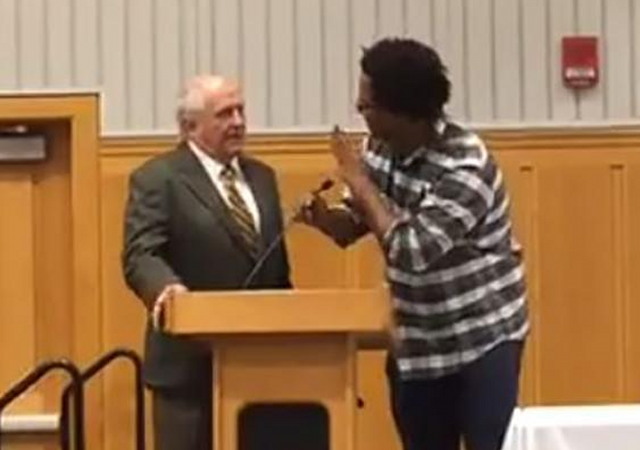 The College Republicans at the University of Michigan invited sociologist and author Charles Murray to speak, but the event was disrupted by student protesters using the same unfair criticisms of Murray heard on other campuses.

You may recall the incident we wrote about back in March: Student Mob at Middlebury Attacks Speaker and Sends Prof to Hospital

Anthony Gockowski and Nikita Vladimirov of Campus Reform report on this latest incident:

Charles Murray’s event at the University of Michigan was completely overthrown by student protesters, who occupied the auditorium and loudly interrupted Murray for 40 minutes before sauntering out of the room.

The event, set to begin at 6:00 p.m. EST, was immediately shut down by protesters before Murray even was given a chance to begin as one demonstrator projected a “white supremacist” hologram above his head.

At one point a man who identified himself as the school’s director of public affairs took the microphone while attempting to ask student protesters to remain quiet.

“We’ve been silent too long!” protesters repeatedly shouted in response, with another yelling “stop silencing students of color!”

The administrator appeared to continue delivering the statement he had come make, but was drowned out by protesters, who took to remarking on the presence of police officers in the auditorium.

Until protesters left the venue, Murray was allowed only brief periods to speak, as one protester took to the stage to ask him a question.

“Do you not understand that your book undermines our very means of speaking?” one protester asked as he walked up on stage to confront Murray personally, mocking Murray’s commitment to free speech.

Here are some related tweets:

Some students did this to Charles Murray speaking at University of Michigan, bravo pic.twitter.com/6vJzB636i4

Robby Soave of Reason was there:

I’m at University of Michigan, where Charles Murray is slated to speak. Several students told me their goal is to shut it down. Stay tuned.

I think students coordinated their cell phone alarms going off to coincide with Murray starting speaking.

The caption for this photo might as well be: Burn the witch!

Murray tweeted later that he was allowed to finish after the mob left:

Murray contrasted his speech Wednesday with the one he delivered in March in which he was shouted down by students from the college. While he faced opposition from numerous student groups protesting his appearance on campus, his appearance did include dialog with students despite the tense atmosphere throughout much of the first half of his speech.

Overall, there were no arrests at the event, nobody was ejected from the venue and Murray was able to finish his speech after many of the protesters left.

How long do you think it will be before the American taxpayers start demanding an end to Pell grants and taxpayer-backed student loans?

And don’t forget about Fulbright “scholarship” money given to citizens to go abroad of foreigners to come here.

I say stop all pell grants and any other kind of assistance, if they are going to do this, let them pay for it by themselves.

To heck with the NFL. I wish the President would weigh in on the free speech crisis on college campuses.

They think that they’re brave and mature. Clueless.

Sorry, time to call out a euphemism here. Just who are these “Social Justice Warriors”? Is this another Blacks vs. American Civilization thing, or are there other players involved? I can’t tell from where I’m sitting. Even here in Massachusettstan, things are pretty ordinary; the local American Blacks are no more surly than usual, the Haitian imports are cheerful but incomprehensible, and the Hispanic invaders are only noisy when Brazil wins some big soccer match. Business as usual, and certainly no sign of any impending revolution.

I read The Bell Curve twenty years ago and don’t recall that much about it. But I could never account for all the excitement; it has some math in it, which should have made it terra incognita for most readers. But nobody has to understand it to get all torqued up about it, I suppose.

Still have my dog eared copy of the Bell Curve from the early 90s that I brought with me from the USA here in Sweden. I also noticed a few years ago there was a public domain updated audiobook version of The Bell Curve floating around. (skip to the last chapters on the application of his studies if you are lazy)

Not only should Charles Murray be heard in the halls of Higher Education but his studies should be taught. What Murray has identified is not the least bit racist. What is especially important is how Murray explains how his findings should be applied in the big picture. Not spending time trying to paraphrase the work. If you have read the Bell Curve or have listened to Murray lecture you already know. If you don’t, read Murray’s work or just listen to him.

While poo-poo’ed by the Left years ago as “racist”, one can see them applying an even more coarsely defined racial bias to college admissions. As I remember Jewish (and Chinese/Japanese) heritage people had higher mean IQ’s than Blacks (and other “white” people). We know that being Asian and hardworking gets you less than nowhere against “people of color” in university admission. (an “ebony ceiling”?)

I am very pleased that I am not in college today.

I have read two of Murray’s books and although he is social liberal his studies have been made to help equalize the playing field for minorities. The “Bell Curve” was such a book and it pointed out the differences between mostly white and black people. His results showed that the difference between whites and blacks was one standard deviation on a bell curve. It upset many in academia and they called him all sorts of names, of course, racist is one of them. What is obvious is that anytime the left does not have a rebuttal to a speakers address, they try to silence them. Murray is such an interesting guy that if these idiots had any sense they would welcome his speech.

Brainwashed lemmings unable to comprehend how good they have it.

Like the Oberlin field hockey players who “didn’t feel that America offers anything worth being proud of.”

Being an ingrate with respect to appreciating America’s bounty of freedom, peace and prosperity (and, the sacrifices that have been made, and, which continue to be made, to ensure that bounty) is, at this point in time, a prerequisite for being a Leftist/Dumb-o-crat.

The universities are breeding an entire generation of spoiled, sanctimonious brats, who strut and preen and prattle on about “social justice” and other fashionable causes du jour, while they text on their smartphones and enjoy comforts, freedoms and riches unheard of in human history (and, throughout most of the world, today).

Tangentially, the proper response to self-aggrandizing pro athlete ingrates such as Kaepernick and Lebron James would have been to tell them to go to Somalia or the Sudan to play ball, and, see how much money they could make over there, as well as contemplate what kind of quality-of-life they’d enjoy with the little free time they’d have when they weren’t being forced to recite the Koran or attend mosque.

Just like the kneeling in the NFL. This happens only with the administration’s consent.

UofM is a Joke. Probably the second most over rated college right behind Harvard. Also glad to see they got their butts kicked by Mich. State. They can have Jim Harbaugh and their liberals. He should not have wasted his time there.

This is what the contemporary Left has become — all infantile histrionics and tantrums, self-aggrandizing posturing, vitriol and pure id. Completely incapable of demonstrating civility, engaging in cogent and respectful discourse and a substantive debate on the merits.

And, this idiotic behavior is happening on campuses across the nation, at both the undergraduate and graduate levels, supported, enabled and endorsed (with painfully few exceptions) by faculty and administrators. It’s truly disheartening and dismaying.

One of the reasons the Left disrupts Conservative Speakers on a College Campus,or other public forums is their precepts and ideas will not stand up, under even minor scrutiny. They know in a fair debate, they will not stand a chance, so it is not allowed to get to that point.

What these idiots fear most is facing the fact they’re ignoramuses.

Denial is a bitch.