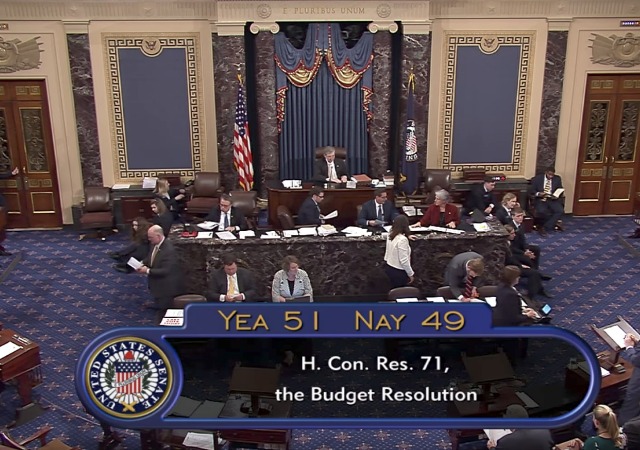 The Senate passed a 2018 budget on Thursday night, 51-49, with Sen. Rand Paul (R-KY) being the only Republican who voted no.

The biggest part of the budget, though, is that it provides a shortcut to tax reform using reconciliation instructions to protects a tax bill that adds up to $1.5 trillion to the deficit from a filibuster. The GOP Congress has failed to repeal Obamacare and they view tax reform as one way to save their butts. President Donald Trump has said he wants to sign something by the end of the year.

First off, it’s a budget bill, so what’s in it? The bill claims it will achieve a balanced budget in 10 years and has “$473 billion in cuts from Medicare and $1 trillion from Medicaid.” It has $5 trillion in other cuts, but does not specify them.

Democrats tried to amend the bill to eliminate “language that could allow for drilling legislation,” but it did not pass. The Republicans hope that “opening up oil drilling in arctic wildlife reserves” will provide the government with an additional $1 billion in “revenue” to make up for the losses in tax cuts. From USA Today:

The budget also includes reconciliation language that the energy committee could use to ease restrictions on oil drilling in the Arctic, so a bill that is brought up to do that also may not be filibustered.

The budget resolution also sets broad spending levels for federal departments, which the Appropriations committees are supposed to use to write more detailed specific spending bills for the 2018 fiscal year.

Trump celebrated the passage on Twitter and said that it will allow for large tax cuts.

The Budget passed late last night, 51 to 49. We got ZERO Democrat votes with only Rand Paul (he will vote for Tax Cuts) voting against…..

….This now allows for the passage of large scale Tax Cuts (and Reform), which will be the biggest in the history of our country!

This budget contains “reconciliation instructions,” which means the Senate cannot filibuster a tax bill from the Senate Finance Committee “if it adds $1.5 trillion or less to the deficit.”

Under reconciliation, the bill only needs a majority to pass. The GOP currently holds 52 seats, but if it ends up 50-50, then Vice President Mike Pence will come in and cast his tie-breaking vote. He had to do this when the Senate voted to confirm Secretary of Education Betsy DeVos.

USA Today explained that the House needs to pass this bill or “both chambers must appoint a conference committee to develop a compromise that would have to be approved again in each chamber.” The House’s budget states that “tax cuts had to be offset with tax increases or spending cuts and could not add to the deficit.” It “also required $200 billion in deficit reduction be found later through reconciliation.”

Once the chambers come to an agreement then the House ways and Means Committee will begin work on an actual tax bill.

Easier Path, But Will It Matter?

Who knows if a tax bill will even pass considering a framework released by the Trump administration last month included the elimination of most breaks. This could cause Republicans in states with high local taxes to vote against a bill that doesn’t allow their constituents to write-off those taxes.

Republicans have also shown a divide when it comes to the child tax credit. Rep. Chris Collins (R-NY) voiced his concerns earlier this month to Bloomberg:

Collins said more specifics about GOP plans to increase the child tax credit would make the benefit for middle-income families clearer. Instead, Republican lawmakers are fending off attacks that some middle-income families would be hurt because the plan calls for eliminating dependent exemptions and the state and local tax deduction.

Trump said in his tweets that Paul will vote for tax cuts, but Paul does not like what he has seen so far. He has dropped hints that he would not approved of tax reform because he believes the framework “cuts taxes for wealthy earners and the poor, but doesn’t do enough to cut taxes for the middle class.”

Sen. Bob Corker (R-TN) voted for the budget bill, but he has made it known he won’t support a tax bill that adds any money to the deficit and he’s not the only one:

“The numbers are really uglier than almost anybody around this place seems to have digested,” said Rep. David Schweikert (R-Ariz.), a member of the tax-writing Ways and Means Committee.

Republicans for the most part have rallied around the tax proposal, which is backed by GOP leaders in both chambers as well as the White House.

The tax plan could cost the government $1.5 trillion in revenue over the next decade, but advocates argue that would be made up for through economic growth unleashed by the corporate and individual tax cuts included in the plan.

The Senate is broken. If they think passing one half-way tax cut will save them, they are mistaken. It will be a pleasure to oppose incumbents in the upcoming primaries.

What a novel approach to make up any tax losses (how the hell can you lose money you never had to start with ffs!) through NOT increasing costs on your citizens BUT by actually generating profit from such evil things as increased oil revenue!

I’d much rather they leave taxes alone and slash the budget. Eliminate entire departments, trim all waste and for Pete’s sake put an end to automatic increases!!!

Don’t all revenue bills have to originate in the House…or is that Constitutional requirement old fashioned these days?

That is one more reason Obamacare should have never made it passed the Supreme Court the first time around. All revenue must come from the House.

The 0bamacare bill did originate in the House. Amending bills by omitting all words after “That” and substituting other words is standard parliamentary practice in pretty much every legislature in the world. It’s certainly not within any court’s jurisdiction to question it.

Don’t all revenue bills have to originate in the House…or is that Constitutional requirement old fashioned these days?

Rand, you will never play golf with the liar in chief again.

Passed 51-49, with all Republicans except Rand Paul voting in favor, and all Democrats voting against.

The more things change in Washington, the more they stay the same.

gRandstand Paul wants to be the new McCain: maverick, spoiler, t**d in the punchbowl.

Honestly, without YUGE drastic spending cuts, tax cuts are just polishing the brass on the Titanic. The $20,000,000,000,000 national debt is the elephant in the living room. Can we please pay it the respect it is due?