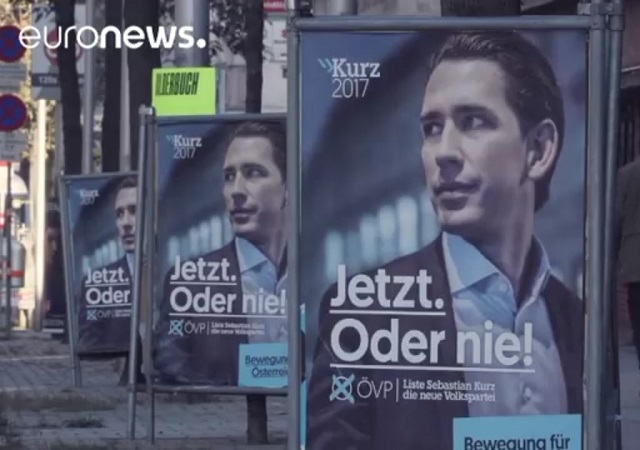 Sebastian Kurz, the 31-year-old leader of the conservative People’s Party (ÖVP), is expected become the next Austrian Chancellor and the world’s youngest leader. With 31 percent, the People’s Party won the highest percentage of votes and is expected invite the Freedom Party to join the government.

Despite the predictability of right-wing party’s success, the Liberal media suffered a meltdown seeing one of their favorite European country shift rightwards.

The Washington Post summed up the mood, writing, “Two years after Austria was among the more welcoming nations in Europe for refugees fleeing en masse across the continent, the results revealed just how sour public sentiment has turned.”

In a long overdue yet bold move, the Freedom Party made mass migration and Islamization the front and center of its electoral campaign. We should “quickly put an end to this policy of Islamization,” demanded the leader of the party, Heinz-Christian Strache, “Otherwise we Austrians, we Europeans will come to an abrupt end.”

“Another Far-right party has won voters’ hearts in Europe with anti-Islam message,” cried Newsweek in an all-caps headline. “The Freedom Party is strongly anti-Islam. (…) In the European parliament the party is aligned with fellow anti-Islam parties the National Front in France and the Alternative for Germany, which also made significant gains in the recent German elections,” the US magazine added.

“Austria’s leading election candidates target Muslims to score points,” the German public broadcaster Deutsche Welle had  complained just days ahead of the polls. “Austria’s federal elections are close to the finish line and the topics of immigration, Islamization, refugees and border security have been the focus of the campaign like never before.”

The UK Business daily Financial Times saw the election outcome as a “significant boost for Europe’s nationalist and anti-establishment movements.” Talking about the formation of the coalition government, the newspaper commented:

Its strong showing means the Freedom party could demand a high price to join a coalition led by Mr Kurz. That would almost certainly result in a more aggressive position from Vienna on many EU topics, including immigration, and the Freedom party occupying top government posts such as the foreign and interior ministries.

Freedom Party’s electoral success is not only a shot in the arm for the resurging Nationalist movements across Europe, but also an open challenge to the EU and European political establishment. With the anti-EU and anti-Islamization FPÖ setting Austria’s agenda, Chancellor Merkel will be losing another key ally in Europe. “FPÖ chief Strache wants to see Austria become part of the anti-immigration [East European] Visegrad countries,” remarked the German newspaper Frankurter Allgemeine Zeitung. Austria could throw a wrench in Merkel’s open borders and pro-EU agenda by siding with Hungary, Poland and other East European countries that harbor robust nationalist sentiment.

tom_swift in reply to notamemberofanyorganizedpolicital. | October 16, 2017 at 2:34 pm

The Muslim Fifth Column inside the city right now is close to a quarter million.

“Two years after Austria was among the more welcoming nations in Europe for refugees fleeing en masse across the continent, the results revealed just how sour public sentiment has turned.”

First-hand experience with “refugees” will do that for you.

Since she was little, my wife has wanted to visit Paris, France. Yet with the horrific events at the hands of invading islamists during the previous decade, that christmas present won’t be happening anytime soon.

Austria, Poland and Hungary are a few of the only European nations we feel are safe enough for tourism.

Just a reminder, right-wing in Europe is vastly different than right-wing on America.

European democrat socialism is often referred to as right-wing because it’s to the right of left-wing marxism, but it’s still socialism – even if it has a nationalist bent.

Don’t celebrate yet and think Austria is getting common sense. The globalists are still in charge.

*****
Also, there’s trouble with trusting someone as young as Kurz in this. There is bound to be some kind of international pressure behind the scenes.

Kurz is a member of the European Council on Foreign Relations[*] — just Google the members; it’s a Soros outfit! He refuses to discuss this membership.

What’s more, all of the ÖVP MEPs recently voted in favor of an abortion law passed in EU parliament. Some “conservative” party!

Also, Sebastian Kurz is not a good option for free speech proponents: he wants to tighten free speech laws; it’s written into the party platform.

Another reason is the failed Law on Islam. He knew the law was crap, but went ahead anyway. The law was passed, and now it’s officially been termed a disaster.

* This is a sister org. to the world government NYC Council on Foreign Relations

Much like America, when it stupidly elected obama, Austria will have the government it deserves.