At least this much is true: Trump is *never* boring 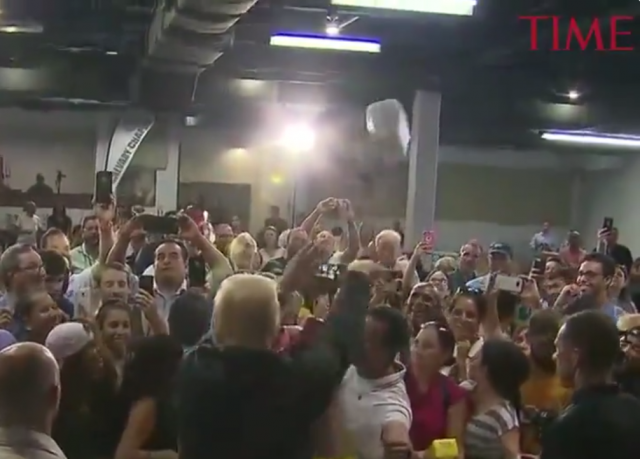 There's video of Trump shooting paper towels into the crowd and it does not disappoint pic.twitter.com/KPfJ1AeAqk

This one wins today’s award for most deliberately misquoted statement.

Yes, Trump says, “now I hate to tell you, Puerto Rico, but you’ve thrown our budget a little out of whack.” But that was followed by, “and that’s fine; we’ve saved a lot of lives.” Naturally, the last bit has been left out of just about every report. Hear for yourself:

President Trump: "Now I hate to tell you, Puerto Rico, but you've thrown our budget a little out of whack" https://t.co/3DSMX2ysAx

The juvenile and indefensible spat between Trump and San Juan’s Mayor (remember Trump’s 18-tweet tirade?) is no better now than it was before the President landed on the island.

Interestingly, reporting still lambasts Trump for his less than charitable words towards San Juan’s Mayor, but make no mention of comments like this one:

The full transcript of Trump's Puerto Rico briefing this afternoon is really something. https://t.co/K9TPRTezD9 pic.twitter.com/2EcoI4GdxY

Lotta spin with this story, here:

Buried in a New York Times stories on the issue:

Mr. Rosselló also said the federal government had denied a request to allow hurricane victims in Puerto Rico who use food stamps to redeem them at fast-food restaurants and other places that serve prepared hot meals.

He said he was pursuing the issue with federal officials and was hoping the waiver would come soon.

With a widespread power failure having knocked out electricity to the island for the past two weeks, food stamp recipients around the island have said that they have been unable to use their benefits at supermarkets, because most stores are running on generators and do not have access to computer systems to process the cards. About 1.3 million Puerto Ricans — nearly 40 percent of the population — use food stamps. Federal rules prohibit public assistance beneficiaries from using the cards in restaurants.

Trump is being blamed for “the humanitarian crisis” in Puerto Rico, but everything, even the NYT report cited above explains that federal aid distribution is the domain of local municipalities. If there’s an inefficacy in getting supplies to Puerto Ricans, it’s not because the federal government has failed on their end. The same assistance provided to Puerto Rico was also given to Texas and Florida after storms left parts of those states ravaged. The difference can be found in the local response, both by the private citizenry and local officials.

There’s a difference in cultures here. In America we still have rugged individuals who don’t sit around waiting for government to fix all their problems. In Puerto Rico, that doesn’t seem to be the case. They’ve been on welfare too long.

Trump was also blamed for not spoon feeding ALL the residents of PR –
we need pix of these ‘poor’ people without the wherewithal to use a spoon, fork and sippycup.

with (D)’s, there are no teachable moments, are there ?

They also chopped the quote by Barry Goldwater on extremism in defense of liberty and the use of nukes in Viet Nam… so… what is new? With uniform talking points and marching orders… I would just like to know where the Poliburo is located that directs these talking points…. it can’t be all ESP.

I think an important point of difference between Trump Derangement Syndrome and Bush Derangement Syndrome is that many people simply swallowed up the lies told about Bush wholesale because they were not refuted, while Trump has zero problem (and sometimes negative problem) firing back at his critics in a way that makes them seem to be flailing muppets.

I’m not really a big fan of Trump. He’s loud, obnoxious, and frequently seems ignorant of the facts at hand. But he hits back when he’s criticized, and that’s a welcome change from years of masochistic Republicans who seem to like the abuse, and roll over whenever they are growled at.

I know a trucker that absolutely will not go there, he was contacted by FEMA. He said he went there once and nothing they promised like housing, security, food, water was available.
He knows it would be much more dangerous now with trucks being attacked for the fuel they are carrying, he said no way, too dangerous.

What are the things which disappear immediately from shelves at first mention of a storm, a flood, a blizzard, etc? Flashlight batteries, bottled water, and toilet paper. The Big Three.

Trump can’t toss flashlight batteries to the crowd, since the press will whine that he’s destroying PR’s ecology if he doesn’t also set up a recycling center for used batteries.

And there’s no point in tossing bottles of water, as San Juan probably already has most of American’s strategic supply of the stuff. It was stacked on pallets behind the mayor of San Juan when she was bitching for the TV cameras about not getting any help.

And we can all guess how the press would chortle if Trump tossed toilet paper to the crowd. Bad optics, no matter how useful the stuff is.

So he tosses paper towels. Almost as good as toilet paper, but much easier to take seriously. And if doesn’t hurt if it clocks somebody on the noggin.

I don’t know who it is, but somebody in the Trump administration obviously knows what he’s doing.

This hurricane seems to have made a lot of Puerto Ricans into Americans.

How is that different from Texans?

Texas was fought it’s own war for Independence and was it’s own country before joining the United States. Go anywhere in the world, show them the Texas map and they can immediately identify it. If Texas were a country it would have the 10th largest economy in the world. Surprisingly, only 15% of the state’s population lives below the poverty line.
We also have larger egos than the rest of the country.

“40% of Puerto Rican residents are on food stamps.”

He’s leading the show and directing it from behind the curtain.