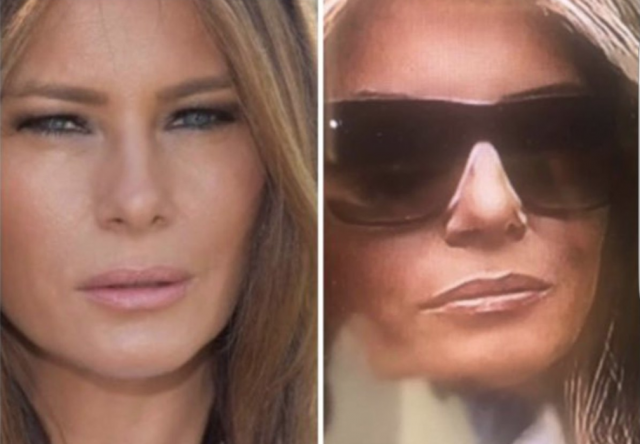 2017, a most ridiculous time to be alive. Wednesday, internet sleuths thought they were really on to something — the “Melania Trump” standing next to the president was not in fact Melania, they claimed.

Dressed in a trench coat and sporting a fab pair of sunglasses, someone whose TV has jacked up aspect ratio decided the difference in appearance was substantial enough to suggest the first lady had a body double.

Is it or isn’t it Melania??? pic.twitter.com/1XsxXad1P5

He's even got a fake wife now – this is from last week, deffo not Melania pic.twitter.com/dpdl5kUlxh

Thats not milania trump..thats got to b a double wtf pic.twitter.com/BnpkKsjZxa

Because it’s “Milania lol RT @JoeVargas: Let me save you some time from looking it up. It's not her. pic.twitter.com/1DKkOexGZs

Milania's hair is not that frizzy and broken

Apparently, the only thing needed to completely alter your appearance is a spiffy pair of shades.

Liberals are convinced that this photo of Melania in sunglasses is not actually her.

False alarm. It is in fact the real Melania Trump, not a body double. pic.twitter.com/vDowTqFjpN

So widespread was this nonsense that CNN and other outlets were forced to correct the internet record:

No, Melania Trump doesn’t have a body double — despite what you may have seen on the internet.

The bizarre rumor grew out of a Twitter post from a California man, who, according to his bio, sells hemp syrup. The tweet implied the first lady standing beside President Donald Trump last week wasn’t actually the first lady, but an imposter. He compared an older image of the first lady to a tight shot of her — as though this provided evidence that there are two different Trumps.

The East Wing dismissed the obvious falsehood, chastising those pursuing it.

“Once again, we find ourselves consumed with a ridiculous non-story when we could be talking about the work the first lady is doing on behalf of children, including the opioid crisis that is gripping our nation,” East Wing communications director Stephanie Grisham told CNN.

Hemp syrup. I suppose that explains it.

Who is that behind those Foster Grants?

Insanity runs wild ! A person has to be totally IRRATIONAL to dream this crap up. You can not tell me all of this stuff, everyday, is NORMAL thinking !

In my nearly 70 years of life I have never witnessed so much silliness coming out of society. Calorie counters that equate minutes of a certain exercise with consumption of a particular quantity of a food item have been as ubiquitous as cockroaches in big city apartments.

Google maps had such s feature showing calories burned walking a designated route with calories in an equivalent number of mini cupcakes.

Google removed the feature because it could. might remotely be possible, to trigger a person with an eating disorder who might not be able to eat just one mini cupcake.

There was conjecture that Hillary had a body double during the campaign… but hard to find one that fit Mary Shelley’s description.

They couldn’t. Because she has a double-body.

And she is now banned on interstate highways.

Though she is available to pull plows on a local basis.

“Michelle Obama To DNC: ‘After This Election You Dipshits Are On Your Own’”
https://politics.theonion.com/michelle-obama-to-dnc-after-this-election-you-dipshit-1819579350

Can you imagine Trump saying this? Or anybody slightly above the level of the gutter, as the Fashion Armpit is?

You do realize you cited to a story in The Onion, right?

Michelle Obama, for all her faults, I am sure did NOT say that (at least not in public).

To be fair, I think this is also a person who cites The Conservative Treehouse on occasion. So falling for The Onion isn’t that much of a stretch.

It is an honor to be considered associated with any conservative treehouse, because such treehouses are above the swamp and the people whose minds are still caught in its muck.

Never heard of the Conservative Treehouse till you mentioned it.
Now that you did:
https://theconservativetreehouse.com/

After review of the blog, there isn’t a single story in there that isn’t true. So now the ball is back to you, Amy:
cite one story on The Conservative Treehouse that is not true.

Conservative Nuthouse is a sewer, similar to Gateway Pundit and Infowars, and citing it as a reliable news source is a sure sign of insanity. Among other things, Conservative Nuthouse was the sole origin of the ridiculous idea that “lean” or “purple drank” is made from Skittles™ and Arizona™ Watermelon Drink, the items that Little Saint Trayvon bought on his last outing. It’s also the origin of the idea that when his alleged girlfriend referred to George Zimmerman as a “crazy-ass cracker” she actually meant “crazy ass-cracker”, which she intended as a homophobic slur. Neither of these have any basis in fact.

That is a much worse statement than any potty-mouthing that comes out of michelle obama. And “‘All of this for a damned flag’?” certainly did.

“All of this” for a treasonous, glutton of a First ‘Lady?’

Do we add this investigation to whether this is a ‘Melania double’, a Russian minder placed there by Russia, to the other Russian stuff Mueller is working on?

See! Now THAT is funny. Kudos!

if there was another woman on the planet that hawt, she’d be with Trump too… it’s like Pokeman! 😎