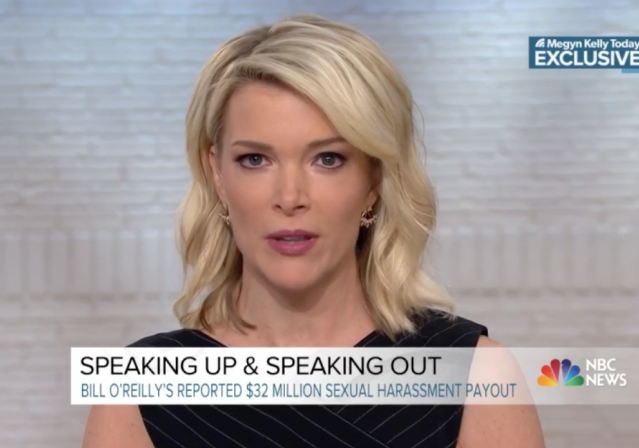 Megyn Kelly’s daytime talk show is not doing well. At all. We’ve covered some of the train wreck here.

In what looks like a sad attempt to give her ratings a desperately needed bump, Kelly used the beginning of Monday’s show to claim she complained about now former Fox News host, Bill O’Reilly’s behavior while both were still employed by the network. O’Reilly was fired months ago over sexual harassment allegations.

“O’Reilly’s suggestion that no one ever complained about his behavior is false. I know because I complained,” said Kelly, who then read portions of an email she claims she sent to Fox News execs.

Kelly’s claims may or may not be true. But her tone and framing suggest she’s just another woman who tried speaking truth to a powerful man, words she claims were ignored by other powerful men (a story we’re hearing repeatedly in various forms lately). Given Kelly’s tough persona, it’s hard to square these claims with the Kelly the public knows.

“Perhaps he didn’t realize the kind of message his criticism sent to young women across this country about how men continue to view the issue of speaking out about sexual harassment,” she wrote in the email. “Perhaps he didn’t realize that his exact attitude of shaming women into shutting the hell up about harassment on grounds that it will disgrace the company is in part how Fox News got into the decade-long Ailes mess to begin with.

“Perhaps it’s his own history of harassment with women, which has, as you both know, resulted in payouts to more than one woman, including recently, that blinded him to the folly of saying anything other than, ‘I’m just so sorry for the women of this company who never should’ve had to go through that.’

Kelly said Shine informed her he would “deal with it.”

“By 8 p.m. that night, O’Reilly had apparently been dealt with, and by that I mean he was permitted with management’s advance notice and blessing to go on the air and attack the company’s harassment victims yet again,” Kelly said.

On his show that night, O’Reilly said, “Don’t run down the concern that supports you by trying to undermine it,” about any women who feel they have been harassed.

Saturday, the New York Times reported Bill O’Reilly paid out some $32 million in a sexual harassment settlement before being canned by Fox News. The NYT reports this was the largest of six such settlements.

O’Reilly joined Glenn Beck’s radio show Monday morning to dispute Kelly’s story. In this clip, Beck reads a letter O’Reilly provided written by Kelly, thanking him for being a great friend. O’Reilly also has a letter from former Fox News personality, Gretchen Carlson. It wasn’t sexual harassment, O’Reilly claims, rather malicious reporters at the NYT and CNN out for blood are trying to ruin his career, his family, and his good name.

“I never had any problem with Megyn Kelly…I don’t know why Megyn Kelly is doing what she’s doing…It is incomprehensible,” O’Reilly told Beck.

O’Reilly’s camp photoed the letters sent by Kelly as proof of O’Reilly’s claims:

The letters aren’t proof O’Reilly was never involved in sexual harassment, but they do show a friendly relationship between the two former Fox News hosts.

In addition to publishing the letters he received from Megyn Kelly, O’Reilly responded to the NYT Saturday report accusing the paper of ignoring facts and instead, relying on “unsubstantiated allegations, anonymous sources and incomplete leaked or stolen documents,” to form their story.

Once again, The New York Times has maliciously smeared Bill O’Reilly, this time even failing to print a sworn affidavit from his former lawyer, Lis Wiehl, repudiating all allegations against Bill O’Reilly. The Times ignored that evidence, sworn under oath, and chose to rely on unsubstantiated allegations, anonymous sources and incomplete leaked or stolen documents.

Here are the facts: after the Chairman of Fox News Roger Ailes was fired in July 2016, dozens of women accused scores of male employees of Fox News of harassment – including the current co-president of Fox News Jack Abernathy.

21st Century Fox settled almost all these cases, paying out close to $100 million dollars. Six months after Mr. Ailes left the company, Fox News Corporation signed Bill O’Reilly to a record breaking new contract after the company had analyzed and considered all allegations against him.

In its first article about Mr. O’Reilly on April 1st, The New York Times printed inaccurate settlement figures while fully understanding that O’Reilly and his counsel are legally bound by confidentiality and cannot set the record straight.

In its latest diatribe against Bill O’Reilly, the Times printed leaked information provided by anonymous sources that is out of context, false, defamatory, and obviously designed to embarrass Bill O’Reilly and to keep him from competing in the marketplace.

Finally, in the more than 20 years Bill O’Reilly worked at Fox News, not one complaint was filed against him with the Human Resources Department or Legal Department by a coworker, even on the anonymous hotline. The New York Times has copies of two letters written by 21st Century Fox lawyers attesting to that fact.

The Times failed to print them, too.

Click here to read the sworn affidavit of Lis Wiehl.

STFU and go away, you silly cow.

Why she’s doing it should be totally obvious at this point.

… ignoring facts and instead, relying on “unsubstantiated allegations, anonymous sources and incomplete leaked or stolen documents,” to form their story.

That pretty much sums up today’s MSM kind of (not)journalism. I don’t think they hide it anymore, or that they feel ashamed because of it.

What would compel O’Reilly to fork over $32M to Lis Wiehl?

I’m curious to see what will compel B.O. to pay a 30 billion Won fine to DPRK. LOL.

Um, you do realize that’s a parody account, don’t you?

You do realize that I am being sarcastic by referencing a twitter parody, don’t you?

Some people just have an uncontrollable compulsion to hear themselves speak.

Is it a certainty that O’Reilly paid Wiehl $32M? If so, I cannot see that O’Reilly, as combative a person as he is, would fork over such a sum to “protect (his) children) from the Angst involved in an open litigation.

It’s not incomprehensible, O’Reily. Her ratings are in the sewer, she’s burned all bridges with conservatives, no liberals want to go on her show because she’s served her purpose and they don’t have to pretend to like her anymore, so she has to resort to yellow journalism and shock value to try and remain relevant.

Her show is probably going to get cancelled in the next 6 months.

I did not see anything Kelly said that evidences sexual harassment against her or personal knowledge of BO harassing another woman. She is just talking secondhand and speculation and about his actions in defending himself.

It is difficult to believe that any sexual harassment case would be worth $32MM.

Kelly sold her soul to GOPe devils, and now she’s paying the price.

And, REMEMBER, this is a SETTLEMENT. Not a jury award, which logically could be much larger.

What’s funny here is that Weinstein is a very plausibe pig, but O’Really? (with a history of pay-outs like Weinstein) is a “victim”.

Pigs abound. As does irony.

It’s all about tribes.

THIS POOR SHRINKING VIOLET!! Interestingly enough when she appeared on Howard Stern and he asked her about her breasts and if she had implants she didn’t run away shrieking, she chose to tell him about the size of her husbands penis and discuss their sex life.
http://www.youtube.com/watch?v=fCyI2_i-Xx8

THIS is ad hominem.

It does not deal with the charge, but takes the form of, “Oh, yeah? Wul so and so did such and such!”.

O’Really? is dirty as Weinstein, as Ailes, as Polanski, as…

O’Really? is only defended by the tribalists. Who have given up thought for their religion.

I don’t doubt that O’Reilly, as a perfectionist, was mean to women, perhaps to the point of ‘degrading’ them. But that’s not ‘sexual harassment.’

I’m no fan of BO, but seriously, if he is relying on Weil’s affidavit as ‘proof’ that he did not sexually harass her, then he is counting on you not knowing how the legal settle game is played. If you paid me 32 mil, I’d pretty much sign anything you put in front of me. (As long as it wasn’t a lie or fabrication.)

Yeeeeeeeup. Note the very artful wording. Which is what you expect.

Note also that O’Really? is NOW declaring he did all this settling “for the chil’rens”.

What a piece of shit.