“I went to go lift my pant leg up and I saw the blood.” 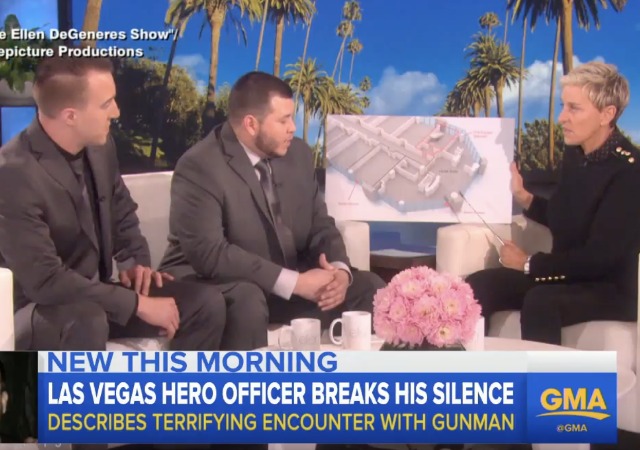 Mandalay Bay security guard Jesse Campos has broken his silence on The Ellen Show about what happened before Stephen Paddock opened fire on an outdoor concert in Las Vegas. Campos sparked intrigue after he cancelled numerous media appearances, but told Ellen DeGeneres that he’s been “healing physically and mentally.”

He appeared along side with building engineer Stephen Schuck, who went to investigate why the fire door on the 31st floor was blocked.

Campos told Ellen that he had been sent to inspect an open door on the 32nd floor, which is the location of Paddock’s room. He tried to access the floor from the 31st floor, but noticed “the stairwell door was blocked.” From Fox News:

“There was a metal bracket holding the door in place,” Campos said, describing how he was blocked trying to enter the 32nd floor from a stairwell right next to Paddock’s room. “That was just out of the ordinary. It’s not normal.”

He managed to get on the floor via elevator and called security, who sent Schuck to investigate the door. Campos walked down the hallway and heard rapid fire:

I took cover. I felt a burning sensation. I went to go lift my pant leg up and I saw the blood,” he recalled. “That’s when I called it in on my radio that shots had been fired.”

Around the same time, Schuck was making his way to the floor from a service elevator to check on the door. However, he started to hear what he thought was a jackhammer, which struck him as strange because he didn’t think they would be doing work on the floor so late. Campos saw his colleague and warned him to take cover as well as another woman who was staying on the floor and had come out from her room.

“I want to thank first responders and people on the ground of the show helping each other out,” Schuck said. “I think the acts of humanity were major that night.”

As he continued, “I want to thank Jesus again from my family and all my friends and everybody for saving my life.”

Police Timeline of the Shooting

Last Friday, Professor Jacobson blogged about how the police and the hotel still cannot agree on some details regarding the shooting. There have been three versions out now over when security reached Paddock’s room on the 32nd floor:

But it didn’t take very long for the Las Vegas police to release a precise timeline. The initial timeline was that Stephen Paddock’s shooting stopped when, approximately 6 minutes after he started, he was interrupted by a security guard from the Mandalay Bay hotel. Paddock then turned his fire into the hallway, firing some 200 bullets, and after that the shooting stopped as police arrived. That was Version No. 1.

Some days later, the Las Vegas police backed away from that timeline, and stated that the security guard actually arrived 6 minutes before Paddock started shooting into the crowd 32 stories below him. That raised a number of question, including why no one called 911 after what must have been a loud volley of shots in a hotel hallway. That was Version No. 2.

Then on October 13th, the police said that Campos found the blocked door at 9:59PM and Paddock fired upon him “‘in close proximity to’ 10:05 p.m., when the mass shooting began.” So now that six minute gap does not exist.

The hotel says that security arrived sooner than that (emphasis mine):

Las Vegas police say they didn’t get to the floor until after the shooting was over. But MGM Resorts International, the owner of Mandalay Bay, says police officers were there shortly after the shooting began, responding to a report of a security guard being shot. The discrepancy could raise questions about whether police might have taken steps to intervene while Paddock was launching his devastating 10-minute onslaught….

Then on October 13th, the police said that Campos found the blocked door at 9:59PM and Paddock fired upon him “‘in close proximity to’ 10:05 p.m., when the mass shooting began.” So now that six minute gap does not exist.

Six minutes or not, this whole story still makes no sense. Why would anyone intent on mayhem dick around with silly gadgetry like bump stocks? The sole function of the bump stock (and a whole collection of similar gadgets and techniques) is to approach full-auto fire in an entirely legal manner. Criminals are not interested in doing things in a legal manner. Why not get a proper machine gun if that’s what the shooter wanted? They’re not made of unobtanium. Legally-obtained ones are expensive. So are illegally-obtained ones. If Paddock was really the shooter, the expense would have been an annoyance, not an obstacle.

It might make sense if the object of the “exercise” is to make a case for more gun control. I know we have not been given much in the way of details, and those details we have been given are suspect (to say the least). But IIRC he supposedly purchased all, or most all, the firearms in the past year (or am I mistaken on that?).

If making a case for more gun control were the objective, it would make sense to only use firearms which could be legally obtained by John Q. Public. Obviously I don’t know that is the reason for his evil act, but it is a possible answer to your question of why use only legal firearms instead of illegally modifying rifles to full auto fire.

This whole thing was very thought out. And remains very strange.

notamemberofanyorganizedpolicital in reply to EBL. | October 18, 2017 at 6:08 pm

Full auto machine guns are not as easy to get as you think, legally or illegally.

legally buying a Class 3 firearm takes piles of red tape, months of bureaucracy at local & federal levels. and costs a boatload of money.

illegally modifying an AR is difficult, but not impossible, if you have a lathe, a drill press, etc.

AIUI, modifying an AK is easier, but not trivial.

building a full auto weapon, such as a Sten gun, is actually quite easy, and you can bet all the tools you need from China Freight. during Big Mistake 2, the real Resistance manufactured them in Europe, behind the lines.

gunsmiths in Pakistan’s border territories can build almost anything, with the most crude tools imaginable.

Buying a Class III firearm or converting isn’t as easy as the media would have you believe. To achieve reliable full auto takes some skills. So why bother doing that and risk exposure when you can simply add the stock on without notice?

look at the hair line, the ears, the nose & how chubby he is.

also, color me skeptical that you would need to raise the pants leg to see the blood from a bullet wound at close range. 5.56 ammo is designed to wound, not make clean holes with no blood.

Well…”Ellen” has never been know to “fake” it has she?

Edward in reply to notamemberofanyorganizedpolicital. | October 19, 2017 at 8:00 am

When I read that he first appeared on that show I thought it was a really strange venue for his first public appearance.

Maybe it was really George Zimmerman?

only if George has lost a lot of weight AND gotten his hair back. 😎

The answers raise more questions. Campos was sent to check an open door on 32nd floor. Where was that door? He was blocked from accessing 32nd floor by the blocked fire door. Why did he not take the elevator to the 32nd rather than the stairs? Where was he coming from that made the fire stairs a more convenient route?

I have seen nothing about that initial open door, such as which room, and what might have made it something for security to check.

In many buildings, the fire stairs are there for emergency exit and once in the stairwell one must descend to the ground floor (or other designated level) before they can leave the stairwell. The doors into the stairwell are locked from the stairwell side so non-authorized people cannot move from floor to floor via the fire stairs; you need a key to do that. Is this the case at this hotel?
Whatever was securing that door had to have been put in place to prevent access from other than the elevators.

Everything that happens in those hotels/casinos is on video someplace, even the elevators. There should be video of Paddock schlepping all that hardware to his room. Was there luggage in the room sufficient for it all to come up in one trip?

He is security so why would he NOT have keys to access those areas? Wait for the elevation or simply walk up one floor? Most would walk unless you were so out of shape the walk would kill you.

But why this guy is such a drawer is beyond me. He checked a door and got shot. So? He’s one of many unfortunately.

No one will ever believe the truth surrounding this story – mostly because of how the information dissemination is happening.

This is the Millenial’s Kennedy Assassination.

“No one will ever believe the truth surrounding this story…”

actually, i believe they are withholding the truth because they are afraid people WILL believe it, and it runs contrary to what they *want* us to believe…

for instance, they can’t even figure out a timeline, in one of the most heavily surveillailed places on earth, but yet they were able to “rule out terrorism” before the sun rose the next morning?

pull the other one, it’s got bells on it.

The LVPD and the FIB must hold stock in the Conspiracy Industry. It’s almost like they are trying to fan the conspiracy flames. Curiouser and curiouser.