James Woods: Reports of My Retirement Are Greatly Exaggerated

James Woods: Reports of My Retirement Are Greatly Exaggerated

“Who would care if I were?” he wondered. 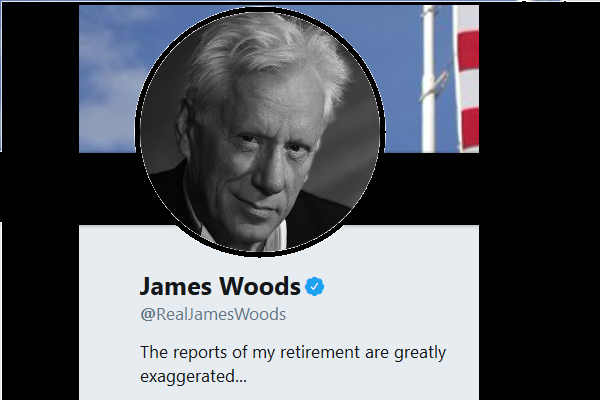 James Woods is one of only a handful of outspoken conservative actors in a Hollywood filled with Harvey Weinsteins, Ashley Judds, Debra Messings, and Mark Ruffalos.  So when his realtor announced, mistakenly as it turns out, that he was retiring from Hollywood, the news spread like wildfire.

In an article entitled, “James Woods says he is retiring from acting and selling one of four Rhode Island homes after claiming no one wants to hire him because of his ‘conservative political views’,” the Daily Mail reported:

Allen Gammons said Friday that Woods is 70 and wants to relax.

The property, on Boone Lake in Exeter, Rhode Island, is selling for $1.39million. The actor owns four homes in the state.

Gammons also added that the actor’s brother and mother recently died, and he hopes to spend more time on passions including photography, antiquing and poker.

Last month, Amber Tamblyn penned a piece for the New York Times in which she accused Woods of “hitting on her” when she was 16.  Woods denied the allegation.  Yet it wasn’t long after the news hit that he was retiring that news outlets implied a connection between that flap and his purported retirement.

The move comes on the heels of last month’s Twitter brouhaha with Armie Hammer and Amber Tamblyn, who accused Woods of hitting on her when she was 16 — an allegation that he called a lie.

Woods, however, has since stated that the claim is inaccurate and that he has no intention of retiring.

So I decided to talk to a reporter for the first time in years. To my surprise he got it right! Thank you, Avi… https://t.co/NPl8fUuKkY

Apparently, Woods’ realtor misunderstood his intentions in selling the Rhode Island property, and when he called Woods about the article announcing the sale, Woods says he was distracted and approved it without really paying attention.

Before driving up to the lake this week, Woods went to breakfast with his real estate agent, Allen Gammons, to devise a marketing pitch.

“We did a little interview,” Woods recalled, and then patched Gammons into his phone call with The Post for the details.

“You said you want to simplify by having less property as you go toward retirement,” Gammons said.

So Gammons wrote up a news release. It began:

“Longtime Rhode Island resident and Warwick Pilgrim High School graduate James Woods, Veteran of nearly 150 movies and television shows, has announced today that his recent retirement from the entertainment field has prompted him to simplify his life.”

The real estate agent read the draft to Woods over the phone before sending it out. The actor was driving at the time, and more interested in the photos.

“I was not paying attention,” he said. “I somehow didn’t hear ‘retirement.’ ”

Others heard nothing else.

Buried three paragraphs deep in an article titled simply, “James Woods to sell home in Exeter,” the Providence Journal mentioned that Woods would be ending his career and “hopes to spend more time on passions including photography, antiquing and Texas hold ’em poker.”

Woods apparently didn’t think much of the error until he realized that it had gone viral.

When he learned that he had apparently retired, Woods said, he was tempted to leave the story uncorrected to find out what would happen.

“Who would care if I were?” he wondered.

The Hollywood press soon answered his question. Within hours, entertainment sites swooped in on the “bizarre home listing,” as Deadline called it.

. . . .  On Twitter, where Woods writes much less about film than conservative politics, fanslamented the news while non-fans mocked him for it. Had he not retired decades ago, some quipped. Others wondered when he would “retire” from social media, where the actor regularly attacks liberal causes and what he sees as left-wing bias in entertainment and the news.

Woods watched his bogus retirement played out online, but never debunked the report until The Post tracked him down on Saturday.

In truth, he said, it was funny.

“I’m the world’s biggest tease on Twitter,” Woods said. “I do not remotely take myself seriously in any way. Why do you think I’m on ‘Family Guy’?”

The reports of my retirement are greatly exaggerated… (? to Mark Twain)

James Woods is a lot of fun to follow on Twitter. I highly recommend it.
Today I was reading his response to some idiot, who happens to be a lawyer, but was stupid enough to direct a libelous public attack against Woods. I think it’s still going. Fun, I tell you.

Once a property is involved in news, no matter how peripherally, demand increases. Like office space in the Watergate Building. Now this is the James Woods Retirement Snafu House, and everybody on the planet will know about it—without it costing Woods a dime.

But why Rhode Island? Not really one of the hot spots to accumulate real estate in. I mean, sure, H.P. Lovecraft was hot on the place, but that’s not really a sterling endorsement.

The leftist hollywood blacklist is real. James Woods’ is rich and famous, and can afford to do what he wants. But there are thousands trying to make a career, who must hide their political beliefs, or falsely side with hollywood leftist idiocy.

The scummy rinos hogging the leadership positions of the GOP (ryan and mcconnell) are in the way of Congressional hearings on this.

When communists in hollywood were trying to subvert the nation, the democrats were hysterical that the Senate was trying to ferret them out.
MCCARTHYISM: THE ROSETTA STONE OF LIBERAL LIES:
http://www.anncoulter.com/columns/2007-11-07.html

The shoe is on the other foot now, and the hollywood is happy to watch harvey weinstein take a shower and/or enable pedophilia, and while oppression and the most vile of crimes run rampant in their community and profession.