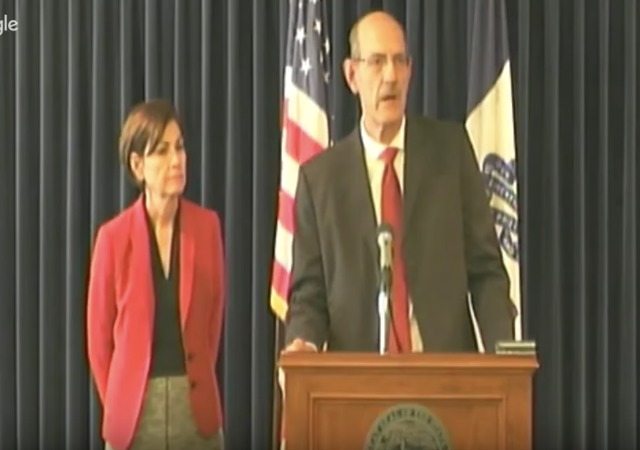 In August, Iowa officials submitted a request to make changes to its Obamacare market as it faced doom due to high premiums and insurance companies dropping out. Officials wanted to make changes that would “provide consumers with age- and income-based tax credits as well as using a reinsurance mechanism for insurers for costly medical claims.

Now Governor Kim Reynolds (R) and Iowa Insurance Division Commissioner Doug Ommen have announced that the state withdrew its request since it “cannot be approved under terms that would be workable for Iowa.”

From the governor’s office:

“Premiums under Obamacare have increased 110% for Iowans since 2013, and thousands of Iowans can no longer afford health insurance,” Governor Kim Reynolds and the Centers for Medicare & Medicaid Services (CMS) Administrator Seema Verma said in a joint statement. “Iowa pursued state flexibility through the Stopgap Measure, but ultimately, Obamacare is an inflexible law that Congress must repeal and replace. Obamacare is unaffordable, unsustainable and unworkable.”

“Obamacare is an unworkable law,” IID Commissioner Ommen said. “The Stopgap Measure was an innovative solution to help thousands of Iowans. Unfortunately, Obamacare’s waiver rules are so inflexible that the Stopgap cannot be approved under terms that would be workable for Iowa. This is evidenced by the fact that a bipartisan group of senators recently announced a bill to fix some of the inflexibilities on Obamacare’s waiver provision that Iowa has run into.”

This is what Iowa wanted to do:

The hope is that changing the tax credits would encourage a larger number of younger, healthier people to purchase insurance and help spread out costs.

The tax credits would provide a fixed level of financial assistance based on age and income. That’s in contrast with ObamaCare’s subsidies that are tied to the cost of health insurance plans.

“In Iowa, we face an immediate collapsing market. … Iowans deserve a healthcare system that better serves their needs,” Gov. Kim Reynolds (R) wrote in the application.

Gov. Reynolds gave props to President Donald Trump’s administration for its “commitment to state flexibility” and tried to work with the state, but the way Obamacare is written, there was not anything anyone could do:

But, Obamacare was written in an inflexible way, and Iowa could not receive the terms it needed to move forward with the Stopgap Measure. Obamacare’s Section 1332 says that states can file for an innovative waiver, but if those states are facing a failing market, and if they are successful in stabilizing the market and bringing people back in, the waiver will not work. In other words, the title of Section 1332—“state innovation waivers”—is an oxymoron.

Medica from Minnesota is the only insurance company that will sell plans on the exchange in Iowa. However, the company explained that premiums “would go up an average of 57 percent in 2018, partly because Trump also has ended cost-sharing subsidies to the insurance companies that held rates down.” From Sioux City Journal:

“We certainly understand the state’s desire to improve the individual market in Iowa, and we are appreciative of being a part of those discussions,” said Larry Bussey, Medica’s communications director. “While this is not the preferred outcome for the state of Iowa, we want consumers to know that Medica is ready.”

Bussey said consumers who previously purchased coverage through healthcare.gov will receive information from the government and Medica over the next week explaining options.

“We strongly encourage consumers to see if they qualify for a premium subsidy” that could “dramatically reduce” costs for those found to be eligible, he said.

The left is falling faster than Weinstein.

FORBES: Trump And His Followers Are Part Of A Global Trend That We Need To Recognize:
https://www.forbes.com/sites/melikkaylan/2016/03/14/trump-and-his-followers-are-part-of-a-global-trend-that-we-need-to-recognize/#79e08a303ad5

Donald Trump is as amazing as we’d hoped he’d be.

But — look for the swamp to start a war to distract from their fall. It’s a very dangerous time.

notamemberofanyorganizedpolicital in reply to TheFineReport.com. | October 24, 2017 at 10:03 pm

They can’t “fall” fast enough for me!

I think they’ve already started the War – But Nobody Came to the War the Started.

“I also do not understand why people demonize the healthy people who don’t want to buy insurance.”

People do this because they want these people to subsidize them, which is a euphemism for theft. These people are worse than common thieves though because they employ the government as their muscle. They don’t even have the decency to take the risks themselves.

the old saying remains true: no matter how hard you try, you can NOT polish a turd.