How badly were Christopher Columbus statues vandalized this year?

How badly were Christopher Columbus statues vandalized this year?

All still stand and none were beheaded. 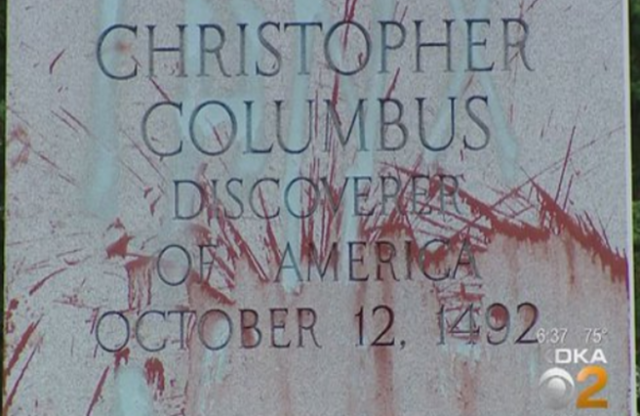 Legal Insurrection readers will recall that after the spate of attacks on statues representing St. Junipero Serra, the Catholic missionary, that there was concern that memorials to Christopher Columbus would get the social justice treatment.

And, indeed, this was the case.

In a a startling display of ethnic-based hatred and intolerance, the Columbus statue in Chicago’s Little Italy was defaced with red paint and ‘mass murderer’ spelled out at the base.

The graffiti was removed by city workers Monday morning.

A resident of the Little Italy area said: ‘It has nothing to do with our neighborhood or the people in the neighborhood,’ said Ella Wilk, CBS reports.

‘It’s political and it happens around the whole city, this idea of marking statues they don’t believe should be here.’

Christopher Columbus statue in Chicago is defaced with red paint and ‘mass murderer’ spelled out at the base https://t.co/cic5sF3Odh

There has been a 20-year tradition of the statue being deface at the Phipps Conservatory in the Pittsburgh area. This year was no exception.

Just below the Phipps Conservatory in Oakland stands a majestic statue of Christopher Columbus.

And on Columbus Day, it stood defaced with red paint.

“This has been happening over the past twenty years. For some reason, folks don’t care for Christopher Columbus,” Pittsburgh city operations chief Guy Costa told KDKA political editor Jon Delano on Monday.

Costa, who also chairs the Columbus Day parade, condemned the vandalism, which he sees as aimed at Italian Americans.

“No one appreciates vandalism of any type, especially with a statue that represents and means a lot to a lot of people,” says Costa.

Just below the Phipps Conservatory in Oakland stands a statue of Christopher Columbus, and on Columbus Day, it stood defaced with red paint: https://t.co/etXZZcXRKN

Connecticut apparently has quite a few aspiring social justice artists: 3 statues were vandalized at various locations across the state.

Middletown police told NBC Connecticut they are investigating after someone vandalized the statue of Christopher Columbus at Harbor Park with red paint. The vandalism happened sometime overnight. The graffiti read “kill the colonizer.”

A statue in Wooster Square in New Haven was also vandalized with red paint, according to New Haven police.

Norwalk police said they are investigating vandalism of a statue of Columbus, but did not release any other details.

Finally, there was a statue in Providence, Rhode Island that was targeted.

I will simply point out that the statues are still standing, though they will likely be substantially cleaner after the power-washing they received. I am also pleased to see Columbus was not beheaded, as was the Serra statue at Mission Santa Barbara in California.

Not only has this spate of attacks failed to inspire a Tear-Down-This-Statue movement, Italian Americans are beginning to push back on the revisionist narrative.

…[T]he gesture to recognize indigenous people rather than the man who opened the Americas to European domination also has prompted howls of outrage from some Italian-Americans, who say eliminating their festival of ethnic pride is culturally insensitive, too.

As an amateur historian, I will simply point out the Aztecs ripped the hearts out of thousands of sacrificial victims and the Incas sacrificed children. I, personally, will join Italian Americans from protecting Columbus from another kind of sacrifice, this time at the hands of social justice warriors.

The last mass lynching in US was of Italians.