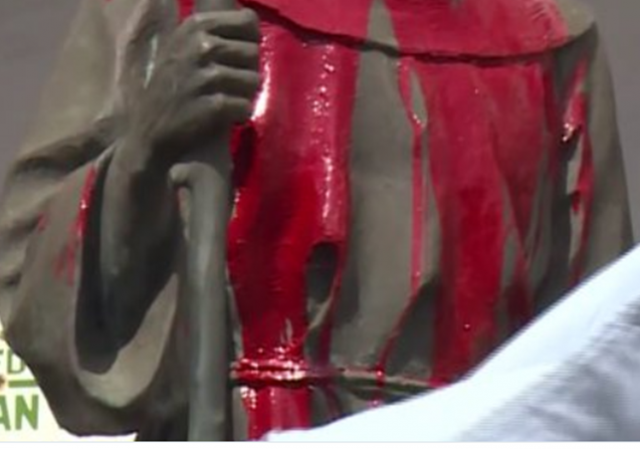 In August, we covered a report that a statue of Father Junipero Serra in a park across from Mission San Fernando had been vandalized, as it was spray-painted red and the word “murder” written on the Serra in white.

The towering statue of St. Junipero Serra had stood at the foot of a staircase leading into the Old Mission Santa Barbara for years.

This week, however, workers were forced to remove the statue of the controversial figure after someone poured red paint over the sculpture and cut off its head.

“I think people forget the friars do live here,” said Monica Orozco, the mission’s executive director. “Anytime something like this happens to anyone’s home, it’s difficult for people.”

The vandalism, which occurred between midnight and 6 a.m. Monday, has triggered an investigation, said Sgt. Joshua Morton, spokesman for the Santa Barbara Police Department. No arrests have been made.

Employees are reexamining security measures for the 13-acre property, which is home to 20 friars and houses the Franciscan School of Theology, Orozco said.

KRON in the Bay Area filed this report:

Social media had additional imagery and opinions about this latest attack:

Sadly, some Californians seem chill with the attack:

https://t.co/xiRr7nBtQI another statue of a murderer beheaded!

This is the latest in a string of attacks on statues honoring the newly-minted saint. There are now concerns that another figure at the St. Louis Opisobo mission may be in danger.

Officials from the Mission San Luis Obispo de Tolosa say there are no special precautions being taken to protect the statue.

A docent for the mission says Saint Junipero Serra only spent one day in San Luis Obispo, but now there’s a full time statue of him in Mission Plaza.

The archdiocese of Monterey says despite the events in Santa Barbara, they haven’t been given reason to worry about the statue’s security.

Serra is known the missionary who brought the faith to the West Coast, having founded nine missions himself from San Francisco to San Diego. He’s formally known as the “Apostle of California.”

Stephen P. White, a fellow in Catholic Studies at the Ethics and Public Policy Center, puts some much needed historical and cultural perspective on the saint:

This was the point Pope Francis’ made in his remarks on the occasion of Serra’s canonization, which bears repeating. “Junipero sought to defend the dignity of the native community,” the pope said, “to protect it from those who had mistreated and abused it; mistreatment and wrongs which today still trouble us, especially because of the hurt which they cause in the lives of many people.” If Serra’s example was rare for his time, that makes it all the more remarkable.

But ideologies built on class grievances and collective guilt are rarely interested in such distinctions. Individuals aren’t praised or blamed according to their personal merits or faults, nor judged by the content of their character. And so we are told Serra must bear the guilt for the sins of others in his class, or his race, or his religion, even of those who came long after he died.

Columbus Day this year is on Oct. 9th. I would suggest the California missions consider doing security assessments and take enhanced precautions around that date, as their memorials are obviously attractive targets for social justice attacks in the name of indigenous peoples.

First, they came for the babies. Since then, we’ve been on a progressive slope, which, apparently, culminated in the “Christ in Urine”, and now “St. Junipero Serra in blood”, to signal the arrival of the age of liberalism.

.. Can’t wait til they begin to rename all the cities!..

Yeah…. all of these cities named after Catholic saints is far from inclusive. What about our Muslim brothers and sisters? What about atheists?

I was going to suggest that we should rename all of these discriminatory cities with numbers but then I Realized that the number thingy is not inclusive either. Some people do better with numbers (see Nobel prizes) while others struggle with math. Perhaps we could try naming cities after colors. San Francisco could become “Mauve”, Seattle could become “Grey”…. you get the idea.

If you think Chicago politics stinks…. the whole place did in the first place.

notamemberofanyorganizedpolicital in reply to alaskabob. | September 18, 2017 at 10:16 am

What an appropriate source name for the Swamp now known as Chicago.

…..Stinky wild onions that give you unbearable foul wind……

Imagine the reactions of the SnowFlakes wearing their Che T-Shirts being drenched in mock blood, surrounded and being taunted with chants of Murderer! Rapist! and Butcher! Somehow that probably wouldn’t go down on the left quite the same.

One of the BIG differences being that Che was a modern monster by any modern standards (outside of post-modernism), while Spanish clergy can only be judged by the mores of their time.

Nobody from the era of Junipero comes off well using the criteria of snowflakes.

One more instance of judging historical figures according to the situation hundreds of years after their deaths rather than in the context of the times in which they lived.

Further, it makes no allowances for what Fr. Serra believed and tried to do. He believed that the Gospel message was for all people everywhere, and that in teaching Christianity to the California tribes he was doing the greatest good for them that he could. In making the judgment that this was a bad thing to do, the critics themselves make the judgment that the indigenous beliefs and way of life were superior to what the Spaniards brought. Indigenous Peoples good, Europeans Bad, is the message, without historical context or understanding.

while i don’t condone this ludicrous behavior.
let’s not forget the Jews of Spain and Portugal who were
hung and various means of torture. and ultimately the inquisition.

as an aside,
I recently witched Fiddler-an amazingly realistic (unfortunately) drama/musical with Topol.
the film, after all is said and done was anti religious.

when I see Mosques treated the same way and images of mo beaded and drenched in blood, then i will know that these snowflakes are fearless because mulims will go after these loonytunes and do to them what they have done to these images.

“..let’s not forget the Jews of Spain and Portugal who were
hung and various means of torture. and ultimately the inquisition.”

Let’s not forget that. Christians in Spain spent centuries driving out the Muslim Moors. Jews would ally with Christians or Muslims, as it suited them personally. The Church and State were strongly intertwined. Now if a Muslim or Jew claimed to have converted to Christianity, but was lying, treachery can be deadly. An unlocked door here, and open gate there, and a city would be imperiled. The point was to determine if they really were converts. My understanding is that the work was done by officials of the state, and not the Church. Ultimately intervention by the Church stopped the Inquisition in Spain. The vast majority of the dirty work can be attributed to a single individual. In general, I don’t care for capital punishment, but for treason I make an exception.

President Obama, with his drone strikes, has been responsible for more deaths than the Spanish Inquisition.

Another lesson to remember: taqiyya means a Muslim may lie to an infidel about sacred deception. That Muslim baggage handler might have a second-cousin, once removed, on his mother’s brother-in-law’s side, who means us ill. He lets him have access to a plane, or plant a package. The problem for us is that while the vast majority of terrorist attacks since Sept. 11, 2001 are of Muslim origin, not all Muslims are terrorist.

I think one would be on strong ground in claiming that the Spanish state (and especially “their most Catholic Majesties, Ferdinand and Isabella”) were more responsible for persecution of Jewish conversos in 15th century Spain than the Church. Just as the Spanish Inquisition was always more a project of the Spanish monarchy than of the Catholic Church.

Which is not to say the Church was blameless. Nonetheless, applying 21st century standards to 15th century history is at best inappropriate. Christian beliefs are far different now (esp. regarding Jews) than they were then; at least, I’m not aware of any Christians favoring forced conversions, or applying state terror such as to force religious minorities to practiced their faiths in secret.

Junipero Serra practiced his faith in a manner that, by the standards of his time, was honorable, perhaps even exemplary. And, yes, anti-Columbians do seem to neglect to mention that the Catholic Church did repeatedly protest the enslavement and exploitation of Native Americans.

Nonetheless, judging those who lived in past centuries by contemporary standards makes about as much sense as accepting the judgement they would make against us if they were able to judge our behavior and standards (can you imagine what they would think of us, or doubt that they would judge us depraved?).

Why do leftists attack statues? Because they can’t fight back.

Leftist job one: destroy American culture, for it reeks of freedom, and it will get in the way of the left’s predictable genocide if they gained power over the rest of us.