Leading German broadcaster: Trump “redefined the rules of the game” 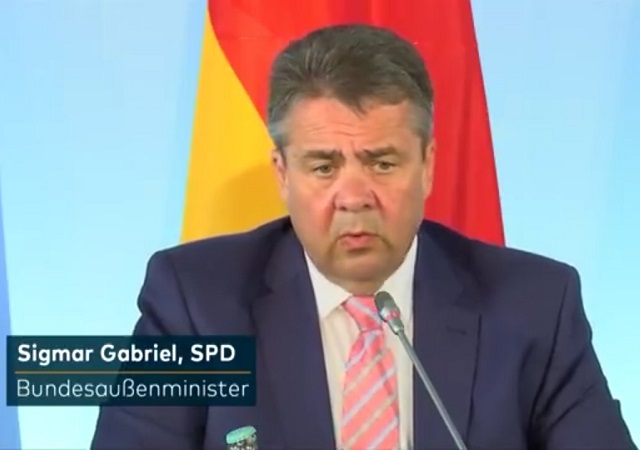 Not just former US President Obama, Chancellor Merkel of Germany, too, regards the nuclear deal with Iran as her greatest diplomatic accomplishment. The prominent German newspaper Süddeutsche Zeitung summed up the central role played by the Merkel government, writing, “Among all the parties working to bring about a negotiated deal, Germans enjoyed [Iranian regime’s] special trust.”

Corporate Germany loved the deal too. The Bavaria Chamber of Commerce, the leading trade body in the country, told its clients ahead of the deal that the “German media landscape across the board agrees that lucrative deals worth billions are waiting to be made in Iran. As soon as the sanction are lifted, the run on the markets begins.”

The hopes were well-founded. German exports to Iran soared, raking in billions of euros in revenue for the fat cats supporting major political parties.

Watching President Trump chip away that political legacy and threaten those corporate profits by decertifying the Iran Nuclear Deal in his Friday speech provoked angry reactions from the German government and corporate media.

Chancellor Merkel joined UK Prime Minister May and French President Macron in supporting the deal in a joint statement. German Foreign Minister Sigmar Gabriel warned that President Trump’s actions could lead to the “danger of war relatively close to Europe”. He also accused the US President of “replacing the rule of law with the law of the strongest.”

The widely-read German tabloid Bild Zeitung carried the headline “Trump’s Dangerous Showdown.” The German newspaper Frankfurter Allgemeine Zeitung called the US President the “tension accelerator,” predicting geopolitical tension following Trump’s move to disavow the deal. Trump will be “risking a massive trust deficit” with the Europeans if he were to walk out of the deal. He was only driven by the “motivation to destroy Obama’s legacy,” complained the newspaper

German public broadcaster Deutsche Welle criticized President Trump for “risking isolating the US for the sake of his own fans”:  that would be the people who voted him into office. Risking anything for the sake of the people who put you in power is a foreign concept in Merkel’s Germany. The German broadcaster’s reading of President Trump’s move on the Iran Deal was, however, surprisingly on the mark:

[P]resident pulled an old trick out of the bag, one that he had so gladly used in his previous life as a businessman and reality TV star. He simply redefined the rules of the game, according to his own terms.

On their part, the EU and Germany are pulling the trick that career politicians on both sides of the Atlantic know very well: backdoor dealing. “Europe scrambles to save the Iran nuclear deal,” reported the Israeli newspaper Times of Israel earlier this week. “Unable to convince Trump to drop his opposition to accord, European capitals increasingly turning to Congress to salvage it.”

The UK left-wing newspaper Guardian also confirmed that the “Europe’s governments” were looking to “bypass Trump to save Iranian nuclear deal” and the “European lobbying efforts are now focused on Congress which will have two months to decide.”

To the dismay of the European establishment that still yearns for a return to the Obama days, President Trump is refusing to play by their rules. After dumping the Paris Climate Accord and quitting UNESCO, he is now taking on another of their sacred cows. The angry reactions coming from Berlin and Brussels show how Europe’s ruling elite still haven’t come to terms with the change of guard in Washington.

Merkel – still hoping to finish the Work that the 3rd Reich began.

notamemberofanyorganizedpolicital in reply to Tom Servo. | October 16, 2017 at 11:45 am

So Reich about Merkel.

the USA has twice come to the aid of Europe (WW 1-2)
and in numerous other ways (end of Soviet Union).

they still don’t get it.

I have said on more than one occasion, how lucky we are that DLT is POTUS.
in reality we are lucky to have the Electoral College, which attempts to guarantee that the winner has wide spread support, not just the coastline populous states, otherwise we would be ruled by the tyranny of the many.

in the past election cycle, the Clinton Crime Family did NOT attempt to get wide spread support but concentratede on the LibRule east/west coasts.

Our election winners do not have to form coalitions to form a gov’t.

we need to ignore the Sharia loving Euros and chart our own course.

” live free or die ” means better to die fighting for freedom then to live and not be free. … The phrase comes from a toast written by General John Stark, New Hampshire’s most famous soldier of the American Revolutionary War, on July 31, 1809.

Merkel is worried that German Industry will be hampered by the loss of the opportunity to sell Zyklon-B to the Iranian Government.

Yup.
So she can go pound sand, then go fly a kite.

notamemberofanyorganizedpolicital in reply to Exiliado. | October 16, 2017 at 1:13 pm

Now I feel even better about the decision.

Nope, still not seeing a downside to this.

“Among all the parties working to bring about a negotiated deal, Germans enjoyed [Iranian regime’s] special trust.”

Well, there’s the problem right there. You can have the Persians’ trust, or you can have everybody else’s.

notamemberofanyorganizedpolicital in reply to tom_swift. | October 16, 2017 at 1:13 pm

“Unable to convince Trump to drop his opposition to accord, European capitals increasingly turning to Congress to salvage it.”

Had they, Obama, and Democrats worked the turning-to-Congress angle in 2015, as we who understand our Constitution urged, and tried to get this thing into a treaty and not an executive agreement, then Trump would be boxed in today and this wouldn’t be an issue.

But a treaty would never have happened in 2015. And the Obama lefties knew that. It would never have passed the Senate as a treaty (a 2/3rd vote is a high barrier). Which explains why the lefties did it the underhanded way.

But that’s just it. There was no point in proposing it as a treaty, because it had no chance of passing. Nor could they get it passed as a statute. Clear majorities in both houses were against it, although unfortunately short of 2/3. So there’s no sense in blaming them for not trying.

“On their part, the EU and Germany are pulling the trick that career politicians on both sides of the Atlantic know very well: backdoor dealing. ‘Europe scrambles to save the Iran nuclear deal,’ reported the Israeli newspaper Times of Israel earlier this week. ‘Unable to convince Trump to drop his opposition to accord, European capitals increasingly turning to Congress to salvage it.'”

What? Wait a minute. I thought the mainstream media were outraged -outraged! – at the very thought of any foreign government attempting to influence our politics.

notamemberofanyorganizedpolicital in reply to Anonamom. | October 16, 2017 at 1:16 pm

Thanks for the heads up on that source – re: Times of Israel. http://www.timesofisrael.com.

In other words, Trump beat the Kobayashi Maru

“He simply redefined the rules of the game, according to his own terms.” Yes.

“replacing the rule of law with the law of the strongest.”

OMG! Rule of law has nothing to do with it. The Iranian agreement is terrible and enables Iranian nuclear weapons and that’s unacceptable.