“it is astounding to me how much is misreported” 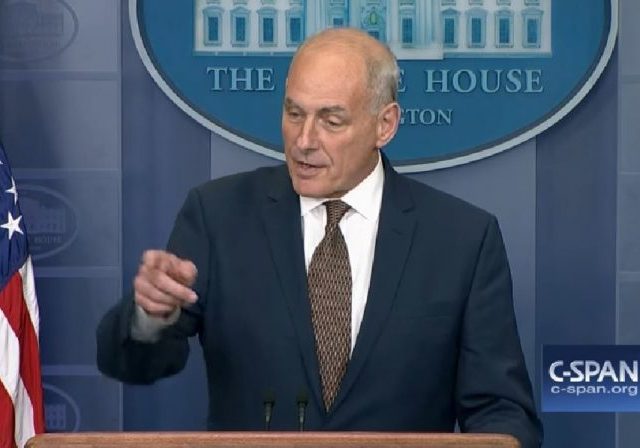 Almost every day some mainstream media reporter breaks a story about how the White House is in meltdown and the only thing standing between the nation and the abyss is Chief of Staff Gen. John Kelly.

Depending which “scoop” you are reading, Trump also is about to fire Kelly or Kelly’s about to quit or Kelly is staying to protect the nation from Trump.

These scoops create a media and political frenzy that have anti-Trump politicians and media talking about invoking the 25th Amendment or some other type of intervention.

It all makes for good theater. It’s the same phenomenon I reported on when Russia was the hot media topic – a steady flow of anonymously sourced unverifiable accusations of impending doom.

In this entire media feeding frenzy, Kelly uniformly is presented as the adult in the room, the one honest person (in addition to Gen. Mattis) in the White House.

Well guess what. That one honest man just said those media reports are full of s***. Of course, he didn’t use that word, but I think that’s a fair paraphrase of what he said.

GENERAL KELLY: …. I would just offer to you that although I read it all the time pretty consistently, I’m not quitting today. (Laughter.) I don’t believe — and I just talked to the President — I don’t think I’m being fired today. (Laughter.) And I’m not so frustrated in this job that I’m thinking of leaving.

So unless things change, I’m not quitting, I’m not getting fired, and I don’t think I’ll fire anyone tomorrow. (Laughter.)

So with that, John.

Q General Kelly, if I could, you said you’re not so frustrated that you’re thinking of leaving. But are you frustrated?

GENERAL KELLY: No, I’m not frustrated. This is really, really hard work running the United States of America. I don’t run it, but I’m working for someone who is dedicated to serving the country in the way that he’s talked about for a number of years. There are incredible challenges — you know, economic challenges, healthcare challenges, all of that; obviously international challenges that have to be dealt with.

I don’t mean any criticism to Mr. Trump’s predecessors, but there is an awful lot of things that were, in my view, kicked down the road that have come home to roost, pretty much right now, that have to be dealt with.

This is hard, hard work, John. And my only frustration, with all due respect to everyone in the room, is when I come to work in the morning and read about things I allegedly said, or things that Mr. Trump allegedly said, or people who are going to be fired, or whatever you all think. And it’s just not true.

That’s my frustration. And I mean no disrespect to you all.

GENERAL KELLY: One of his frustrations is you.

GENERAL KELLY: All of you. Not all of you, but many of you. As I said when I first started talking — again, I’m a reasonable guy, but when I read in the morning — I read the — well, I won’t tell you what I read — but when I watch TV in the morning, it is astounding to me how much is misreported. I will give you the benefit of the doubt that you are operating off of contacts, leaks, whatever you call them. But I would just offer to you the advice: I would say maybe develop some better sources. Some person that works way down inside an office, or — well, just develop some better sources….

What did CNN’s Chris Cillizza focus on, after the media narrative and credibility was completely destroyed by Kelly? Again Cillizza pushed the claim that Trump was out of control:

But it was what Kelly said later — answering a question from reporters in the room — that was even more revealing about how he views the reach and limits of his job.

“I was not brought to this job to control anything but the flow of information to our President so he can make the best decisions,” said Kelly.

What’s not said in that quote — but certainly hangs in the air around it — is this: No one can control Donald Trump. So why try?

The media is incorrigible. “What’s not said in that quote — but certainly hangs in the air around it” is a ridiculous take on the press conference. That is just CNN making things up.

“What’s not said in that quote — but certainly hangs in the air around it — is this: No one can control Donald Trump. So why try?”

Where in the world did this idiot come up with the notion that it SHOULD be that way. Think before you type, and for God’s sakes, edit and vet this stuff, editors!

The media is more than happy to report things the media says to the media, but when it comes to reporting on things Trump actually *says*…

I believe, more and more each day, that the “anonymous” sources are just made up out of the wishes of the dinosaur media.

“If you repeat a lie often enough, it becomes the truth?” to paraphrase Goebbels.

We have a winner!

And I mean no disrespect to you all.

I think Gen. Kelly is using paralipsis here, and also when he says, “I don’t mean any criticism of Mr. Trump’s predecessors . . . .”

I rather doubt that any Marine infantry sergeant ever could be a weenie.

A weenie? More like a man who just showed the country how a man with class behaves. And made the media look petty and small.

I respect that he didn’t descend to their level.

The dirt on his shoes isn’t down to media level. Including, and especially CNN.

The understatement of the day many of us have been warning about: “I don’t mean any criticism to Mr. Trump’s predecessors (please, do), but there is an awful lot of things that were, in my view, kicked down the road that have come home to roost, pretty much right now, that have to be dealt with.”

One can never know what someone else knows, only what they do. Were they not so pathetic, members of the “press” would be a laughing stock in a reasonable world, though it happens more frequently every day. It is difficult to imagine adults so openly proud of their behavior, or so unaware of their sheer stupidity and smallness. Can they believe for one moment that they are peers, the equals of a general Kelly? No good response is possible: either they believe they are, or know they are not but pretend otherwise. Untroubled, they either behave like, or are fools. Then there is the GOPe, perhaps the biggest tragedy of all. It/they has/have a rare opportunity in Donald Trump; a president with a thick skin, a lightning rod willing and able to take the abuse and mockery being heaped upon him; willing and able to take the heat and cover for them if they’d just stand up and do something; a man who has no need to shuffle off to a Harvey Weinstein and grovel for money. They are so shallow and cowardly that they cannot manage that even when he tells them what to do, willing to take the heat for them.

The problem is that there are too many everywhere who fall into the group that is too dumb to learn other than by peeing on the electric fence.

All of journalism has devolved into pandering to a core audience. FNC, CNN, MSNBC…all cater to their viewers and what they want to hear. Gen Kelly should quit reading the WaPo and NYT and maybe checkout a few YouTube channels that are more informative and have no agenda.

Everyone has an agenda. Its just that some peoples agendas are very different to the agendas of the media (ie. these peoples agenda is to actually delve deeper in to the news and understand what is actually happening…which often is at complete odds with how something is be reported by the Democrat propaganda machine (or DPM if you will!)).

Yes everyone does…but lacking the large core audience and cable subscriber base of the MSM, most internet bloggers and video channels have to work closer to the truth. Not all do but for many, credibility is their niche market. It wouldn’t even be a niche if the MSM did it’s job properly, but as such, there are now internet reporters that do a better job with research and analysis than the big sensationalists.

General Kelly probably reads the WaPooh and the NYT and the like with a view to “Know your enemy” rather than as an information source. Unlike Obama who didn’t know what was going on unless he saw it on the news, I expect that Gen. Kelly reads and understands the various briefings the WH receives on a daily basis.

That is a fact, Jack!