Europe: Tunisia Turning into the New “Springboard” for Illegal Migrants

Europe: Tunisia Turning into the New “Springboard” for Illegal Migrants 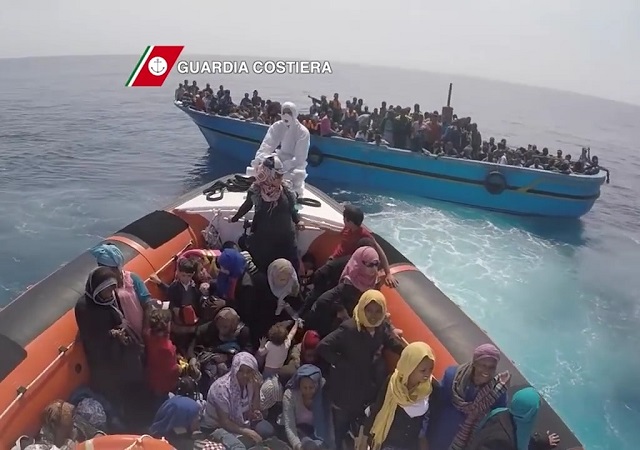 The North African country of Tunisia is turning into a “springboard” for illegal immigrants trying to get to Europe, according to the German newspaper Die Welt. The Muslim-majority country, destabilized in the wake of the “Arab Spring”, was becoming a serious security threat to Europe since the Tunisian government was encouraging its Islamized or otherwise troublesome young men to emigrate to Europe.

Italy, with islands just 70 miles off the coast of Tunisia, is the preferred destination for Tunisians and North African migrants trying to get to Europe. Last year, more than 160,000 migrants landed on Italy’s southernmost Island of Lampedusa alone. In May 2017, German media reports cited leaked government documents claiming that as many as 6.6 million people were waiting in North African countries — such as Tunisia, Libya, and Morocco — to cross into Europe.

In the 1990s, many Tunisians fought in Jihadist campaign overseas. The vacuum created by the fall of the country’s long-time dictator Ben Ali in 2011 has been filled by various Islamic terrorist outfits, including Al Qaeda and Islamic State. German newspaper Die Welt reported the developing situation in Tunisia:

Even though the determination of many young men to leave the country was extremely high, the criticism of the Tunisian Coastguard is growing. The accusations are increasingly being made that the border-guards and other security forces are being bribed by the migrant traffickers.

Give the high-level of social upheaval in many regions [of the country], the Tunisian government may be interested in letting frustrated and jobless young men leave for Europe. Additionally, many observers consider it possible that Tunisia is using illegal emigration to pressure the EU to allocate more financial assistance.

If true, this could be a risky strategy. There are indications that violent Islamists might be among the repatriated North African migrants who would like to come back to Europe.

That’s how Ahmed Hanachi, the attacker from Marseilles, arrived in late September from the northern Tunisian city of Bizerta with illegal migrants to Italy, the Tunisian newspaper Business News reported. He had been deported by the German authorities to Tunisia because of his links to the assailant of the Berlin Christmas market attack. [Translation by author]

Europe’s open doors policy for “refugees” has become a windfall for the smugglers trafficking illegal migrants into Europe. What will be a bane for the European taxpayers in decades to come, rakes in $35 billion for these traffickers each year.

Traffickers are actively aided by pro-migrant activists and left-wing organizations from Europe. European activists carry out almost 40 percent of all migrant “rescue” operations at sea. In August, Italian authorities impounded a German “rescue boat” for allegedly “facilitating illegal immigration” — one of the many “rescue” boats seized by the authorities recently.

According to the European border agency Frontex, European NGOs were colluding with traffickers and their so-called “rescue operations” were putting human lives at risk as they continue to encourage people smugglers to “put even more migrants onto unseaworthy boats with little water and fuel”.

There is lots of blame to go around. Germany’s open doors policy emboldened many migrants to look for a better life in Europe. Even the German Interior Minister Thomas de Maiziere admitted last month that country’s attractive welfare benefits were creating a “pull effect” for economic immigrants.

The failure of the EU and the individual European nation states in securing the outer European borders is another big driving factor. The free movement of people within the continent makes it easier for migrants to crisscross Europe in search of a suitable welfare system. The breakdown of Europe’s ability to regulate illegal immigration has been “compounded by the failure of the Schengen Agreement as well,” Swiss People’s Party (SVP) politician, Claudio Schmid, told Legal Insurrection.

It’s too late, Europe is gone. America stands alone for the time being. How long will we stand is the question?

Obama could not pronounce ‘Anthropogenic.’ (He’d probably call it a ‘corpse-man.’)

But then, not everyone from all 57 states knows what a corpsman is.

For Libyan oil. And Somalian uranium?

A deary “winter” has forever fallen on Europe after that “Arab Spring”. The “Spring” is now the “springboard”. This is one of those “unintended consequences(?)” from the likes of Hillary and Obama and their Arab policy. Hillary may have cackled loudly with “we came, we saw, he died” but the true chickens have come home to roost.

Who destabilized those North African countries???

George W? Must be, he’s been responsible for everything bad which has happened in the millennium so far. Just ask any member of the MSM’s political wing – the Democrat Party.

Europe has decided to avoid all those destructive wars of the last few centuries. Instead they are committing suicide, leaving the infrastructure for the invaders to use.

That infrastructure will sadly crumble, since Muslims do not maintain it. If it wasn’t for foreign labor gleaming Muslim cities like Doha would soon look like Johannesburg, another city being killed by apathy and neglect. Their military aircraft only fly because foreigners maintain them. This is not simply a matter of laziness, but a predictable result of Islamic doctrine, summed up as “because Allah wills it”. There can be no science, because Allah can change the rules of the universe at any time. There is no reason to learn marksmanship, hitting your target is Allah’s will not yours. There is no point to maintaining your cars or guns or planes, because they will drive or shoot or fly if Allah wills it and won’t if he doesn’t.