Did the California Student Who Swiped Another Student’s MAGA Hat Commit a Felony?

Did the California Student Who Swiped Another Student’s MAGA Hat Commit a Felony?

“Look, behavior like this is not tolerated in this country” 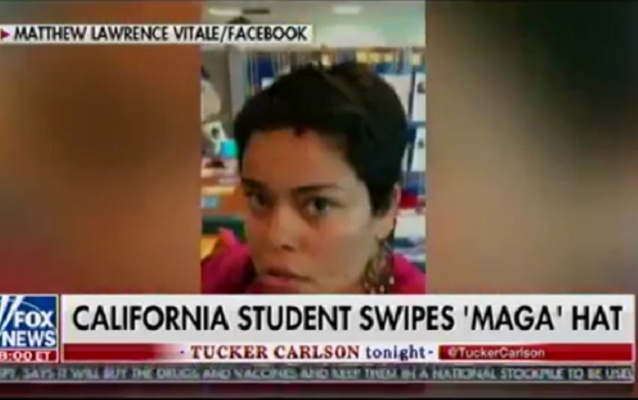 Last weekend, I wrote about a California student who swiped another student’s MAGA hat and went off on a mind-boggling fact-free tirade.  It seems she may now be facing felony robbery charges for taking the hat off his person.

A college student in California who says he was assaulted by a classmate for wearing a ‘MAGA’ hat on campus said he plans to file criminal charges against his attacker.

Matthew Vitale, a member of the University of California, Riverside Republicans, said he was “stunned” when classmate Edith Macias snatched his “Make America Great Again” hat from his head during a campus meeting.

Vitale alerted authorities after the incident but declined to press charges because campus police told him it would only be a misdemeanor. But then Macias posted a bizarre, profanity-laced “SnatchAHat” video online, which eventually went viral, that showed her physically removing the hat from his head – and then verbally attacking him for promoting “genocide.” By showing that she took it off his person, the crime rose to the level of felony, Vitale said campus police told him.

211.  Robbery is the felonious taking of personal property in the possession of another, from his person or immediate presence, and against his will, accomplished by means of force or fear.

(1) Robbery of the first degree is punishable as follows:

(B) In all cases other than that specified in subparagraph (A), by imprisonment in the state prison for three, four, or six years.

(2) Robbery of the second degree is punishable by imprisonment in the state prison for two, three, or five years.

(b) Notwithstanding Section 664, attempted robbery in violation of paragraph (2) of subdivision (a) is punishable by imprisonment in the state prison.

The student whose hat was snatched off his head wants her charged.

And now, [Matthew Vitale] says, he wants her arrested.

“Honestly, this isn’t me trying to get revenge on her,” he told Todd Starnes during a Fox News Radio interview, “this is me just trying to say: ‘Look, behavior like this is not tolerated in this country. There are individual rights and individual freedoms that we are granted as per the constitution, that everybody’s granted. It doesn’t matter what your beliefs are.’”

Of course, there’s pretty much zero chance she will be charged.

Jerry Brown will give her a ‘bravery’ award and announce an investigation into the Republicans’ sanity wearing a trigger hat in CA.

He needs to have eyes in the back of his head if he remains at Riverside.

Of course, there’s pretty much zero chance she will be charged.

You’re making me cynical, Fuzzy. What about charging the Principle of the school for fostering a hostile learning environment? Bullying should not be tolerated!

In high school a guest lecturer was describing how to differentiate like words……for example capitol vs. capital…..since a capitOl has a dOme, and both words have an “O” this helps the student differentiate.

In the case of princiPAL v. principle, the princiPAL is your PAL.

I think charging her for a felony is going a bit far … but IMO something along the lines of misdemeanor harassment seems more fitting.