Ad may hint of future run for a political office. 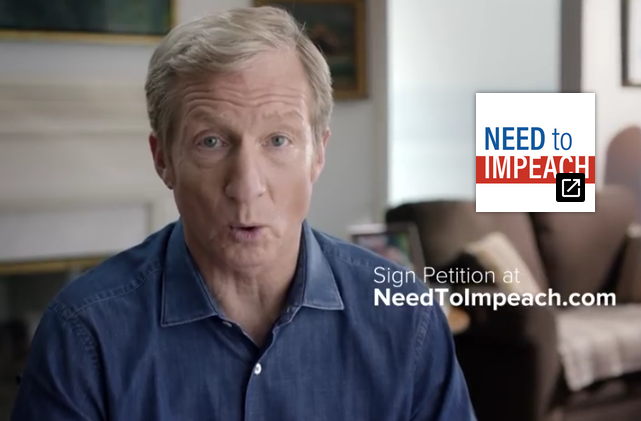 The last time I reported on eco-activist billionaire Tom Steyer in 2015, investigators had issued a detailed report that showed extensive behind-the-scenes coordination between Obama’s White House staff, aides to as many as 12 governors, and officials at multiple arms of Steyer’s network of political and policy group to push the climate-change agenda.

Given President Trump’s regulation-gutting and EPA chief Scott Pruitt’s rollback of progressive clean-power policies (at no small risk to himself), one can presume that Steyer isn’t enjoying the same level of influence that he once had under Obama.

Steyer’s solution, then, is to try and remove this political obstacle.

In the ad, Steyer argues Trump should be ousted from office because he has edged the country toward nuclear war, obstructed justice at the FBI and threatened to shut down news organizations he does not like.

He urges viewers to call their members of Congress and tell them to bring articles of impeachment.

“People in Congress and his own administration know this president is a clear and present danger who is mentally unstable and armed with nuclear weapons,” Steyer says in the ad. “And they do nothing.”

Steyer plans to spend eight figures to air the television ads nationally, but he would not give an exact amount.

I will simply point out that Hillary Clinton spent $1.2 billion on her failed presidential campaign. But, if Steyer wants to throw good money after bad so that it isn’t available for 2020, then I hope he enjoys his free market prerogative.

Speaking of 2020, there are some thoughts that this ad may hint of future run for a political office in Steyer’s future.

KCRA 3 political analyst Kevin Riggs believes Steyer is using the ads to try and pump up his name identification numbers.

“This is really about Tom Steyer running for office in California,” Riggs said. “So you can look at these TV ads as sort of a preview, not so much about Trump, but they are really a preview of his next announcement that he’s running for either governor or senator.”

Steyer’s spokesman said he hasn’t decided if he will seek a higher office.

Should Steyer win either the governorship on US Senate seat in 2018, California’s war on Donald Trump should heat up considerably.

However, there are signs that the TV spot isn’t being welcomed by everyone.

@Jeopardy Why in the world would you play an ad on your show from Tom Steyer? His ad is evil and is a lie about our President.It’s offensive

Twitter why are you showing me a ad from some liberal idiot Tom Steyer who wants Trump Impeached. How about equal time a Post uranium 1 News

Reports are that North Korea is building biological weapons. Prime Minister Lee Hsien Loong and President Trump signed of a deal for Singapore Airlines (SIA) to purchase 39 Boeing aircraft worth close to $14 billion.

In other words, he’s fixing the problems our past leaders failed to solve and returning manufacturing jobs to this nation. Eventually, I think there will be plenty of Californians sick of the war against an effective President, and will want a political leader who cares more about infrastructure instead of political drama.

The only thing these idiots are resisting is reality!

Well, it is California, where anything can happen, no matter how ridiculous.

So the whole impeachment thing baffled me,, I found this:

This may be something legal people know down pat. I certainly hope so, but that guy from CA apparently does not…

His bark has no bite…his petition is bogus, if I understood that article.

Once you get past the idea that maladministration is not grounds for impeachment, you have to come to grips with the idea that Trump’s ideas or policies aren’t enough. He has to break the law in a very visible way.
Given that the last occupant of the White House ran the place using extra-administrative powers (avoiding Senate approval of ‘treaty’ material, finding new sections of the law in the ether, etc), most of Trumps actions are merely a reinterpretation of the laws or bringing the Executive branch up to actually reading the law and doing just that.

This is starting to look like “Let’s decide to impeach Trump and then find a reason.”

Of course. But Congress has the authority to do that. It’s limited only by whether it thinks the voters will punish it at the next election.

Sorry, Prof Black’s opinions are very interesting, but they are merely a discussion of the grounds on which Congress ought to impeach; not of the grounds on which it can impeach. The text of the constitution is what controls, and since there is no authority that can tell Congress for what causes it may or may not impeach someone, there is no such limit. An impeachable offense is simply whatever Congress says it is.

This guy is like the number one donor to the DNC. It is scary to think this guy is so rich.

These ‘rich guys’ like Soros and Steyer don’t use the regular playbook.

I spent years trying to understand the logic of George Soros.
Finally, I realized that this is ordinary logic. The fact that so of his ideas are contradictory on first glance can all be remedied when you realize that they are supposed to be that way. Soros wasn’t ever interested in changing society, he was interest in exploiting it. It was all to create one money making opportunity after another.

oros wasn’t ever interested in changing society, he was interest in exploiting it. It was all to create one money making opportunity after another.

Never looked at it that way before. Makes sense.

These ‘rich guys’ like Soros and Steyer don’t use the regular playbook. What about the Kochs? They’re very rich too, and they use it only for good. So your theory needs to account for that.

Go Tom Steyer!!!!
Between Tom, Bernie & Elizabeth (& maybe Joe!), it would be the most bizarre & amusing Democrat Presidential primary imaginable.

They still don’t get that even if they were to manage to get Trump impeached and ousted from office, that still doesn’t mean they’d get Hillary. Impeachment doesn’t lead to a do-over. It leads to a President Pence.

reading the wiki – he (jewish) married a Presbyterian –
the ‘marraige was conducted by a ‘rahbye’ and Minister.
they have 4 kids – who will NEVER be recognized as Jews, unless they have an orthodox conversion =
will now raise another generation of radical anti semites.
perhaps they are buds with the soros anti semites.

it is enough to cry that generations of jews who have gone through trials and tribulations only to have their offspring, eople who want to see the end of jewish peoplehood.

sob, cry, tear my hair out by its roots.

a plea from HaShem to finally bring Moshiach –
this will my last comment here – it is to sad for words.

“Presbyterian” used to mean something but now so bland. Not exactly standing in the breach for Israel. The long standing joke is that Presbyterians would be the first in Heaven… the “dead” in Christ will rise first… and they are very “dead” right now.

I’m going to go out on a pretty thick limb and assume that is PCUSA. They are technically Presbyterian in government, but they significantly departed from the confessions they claim to follow.

I’m also Presbyterian (ARP) and I don’t know any member of NAPARC that doesn’t consider the PCUSA an apostate church.

Amazing how some crazy people actually make billions of dollars.

…In the US alone over $60 million per year is spent on pet food advertising.

Steyer is a Crony Socialist. Made his fortune off of our tax-dollars, redistributed to him through “green energy” scams.

Trump is an enormous threat to his “business”. “Racket” is a far more appropriate term for what he runs.

Take him seriously though – Steyer, and three other rich guys, figured out how to turn Colorado BLUE, funded it, and stuck with their plan for more than a decade until they achieved success. So much so, that CO is one of the few states in the country still moving towards the D’s.

10 million isn’t going to do much, especially with his amateur theatrics in his attack ads. Nobody is buying Steyer.