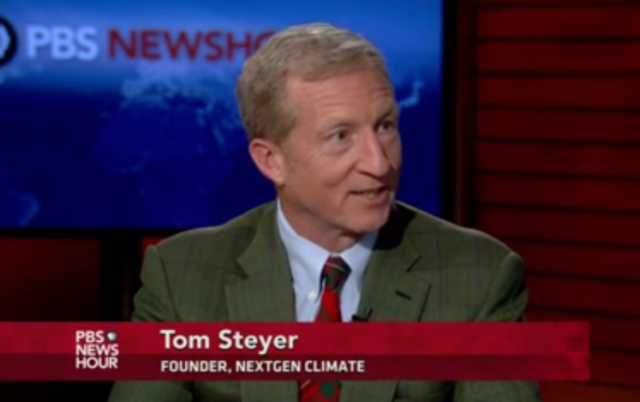 Earlier this year, I reported that a Washington D.C. attorney discovered ingrained collusion amongst top level staff in the office of former Oregon governor John Kitzhaber to “spread climate coordination and collaboration to a larger group of governors across the U.S.”

Investigators have continued to follow the email trail, which has uncovered connections between the EPA regulatory drive and a billionaire, “green jobs” activist:

Involved in the strategy was a top aide to John Kitzhaber, the former Democratic governor of Oregon, according to emails obtained by the Energy and Environment Legal Institute. Kitzhaber resigned this year in the midst of a scandal involving his fiancée.

E&E released its findings in a Monday report that shows extensive behind-the-scenes coordination between White House staff, aides to as many as 12 governors, and officials at multiple arms of Steyer’s network of political and policy groups.

“Our report pulls the curtain back on a carefully planned and heavily funded ‘orchestration’ by individuals who have placed their personal interests ahead of the public interest,” said E&E senior legal fellow Chris Horner in a statement accompanying the report.

…Efforts to sell EPA’s regulations at the state level are important given the controversy surrounding the agency’s final rule, released this month, which relies on states to meet EPA’s emissions reduction thresholds.

Steyer committed $30 million of his own money to champion 2012’s “Clean Energy Jobs Act” measure in California…which is now facing oversight hearings due to a failure to deliver on its glorious green promises:

California lawmakers from both parties are calling for more stringent oversight of a clean jobs initiative after an Associated Press report found that a fraction of the promised jobs have been created.

The report also found that the state has no comprehensive list to show much work has been done or energy saved, three years after voters approved a ballot measure to raise taxes on corporations and generate clean-energy jobs.

“It’s clear to me that the Legislature should immediately hold oversight hearings to get to the bottom of why yet another promise to the voters has been broken,” Senate Minority Leader Bob Huff, R-San Dimas, said in a news released Monday.

The AP reported that three years after voters passed Proposition 39, money is trickling in at a slower-than-anticipated rate, and more than half of the $297 million given to schools so far has gone to consultants and energy auditors. The board created to oversee the project and submit annual progress reports to the Legislature has never met.

The sweet irony of this situation is that Steyer earned his billions as a hedge fund manager, heavily invested in fossil fuels. He is now a climate change crusader, and demonstrates why some of the most dangerous progressives do not hold public office.

For entertainment purposes, here is a video of Steyer explaining how he is different from the evil Koch Brothers:

Given the EPA-caused disaster along the Animas River, this drive to promote government-enhancing policies is especially troubling. The EPA was created to fight actual pollution that existed, not to redefine what pollution is so government-connected billionaires could reap the rewards and fill the coffers of Democratic politicians.

“Nothing in American politics is more corrupt than the environmental movement.”
http://www.powerlineblog.com/archives/2015/08/the-lefts-plot-to-impoverish-americas-middle-class-and-enrich-left-wing-billionaires.php

Yep. As I’ve been saying for years.

The Collective HATES the American middle-class. They say so very clearly in their writings. They want to destroy the American standard of living, while insisting on it or better for themselves.

Tom Steyer is a 1 Percent-er and should be stripped of his unearned wealth (all of it if you are a hedge fund manager) and put in prison.

So says Joe and Lizzie!

The EPA was created to fight actual pollution that existed, not to redefine what pollution is

And yet one of the first things the EPA did was to define DDT and dioxin as pollutants.

You are a piece of partisan garbage.

Yes, and of course it went overboard and resulted in calamnity:

Milhouse, seriously: how old are you?

Dioxin is a dangerous chemical, a by-product of the manufacturing process of DDT.

DDT was used at higher than necessary levels, thus the dioxin exposure was high.