Texts from his mistress allege he tried to convince her to have an abortion. 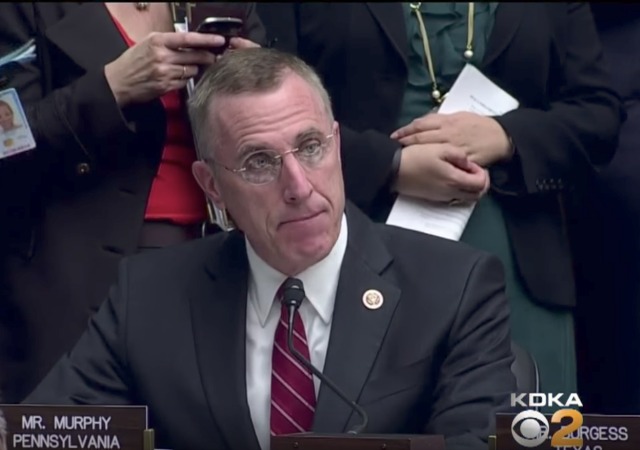 I blogged this morning that Rep. Tim Murphy decided to retire at the end of his term after details about his affair came to light, including texts from his mistress in which she accused him of trying to convince her to have an abortion.

House Speaker Paul Ryan (R-WI) announced that he received a resignation letter from Murphy. From Politico:

“This afternoon I received a letter of resignation from Congressman Tim Murphy, effective October 21,” Speaker Paul Ryan said in a statement. “It was Dr. Murphy’s decision to move on to the next chapter of his life, and I support it.”

His decision comes after some colleagues pressured him to step down:

The Pennsylvania Republican’s about-face came after House GOP leaders and senior Republicans upped the pressure on Murphy to step down. GOP sources familiar with Murphy’s thinking said the married man initially believed he could weather the Pittsburgh Post-Gazette story revealing he had encouraged an abortion in texts he sent to his girlfriend, a psychologist half his age.

But many senior Republicans did not believe he could — or should — survive until the end of his term. Several top Republicans said Ryan, who met with Murphy Wednesday evening to discuss his future, also wanted him to step down.

The affair leaked out last month during the divorce proceedings of forensic psychologist Shannon Edwards, Murphy’s mistress, and her husband Jesse Sally, who “sought to have Murphy testify in a deposition earlier this year.” Murphy admitted the affair:

“Last year I became involved in an affair with a personal friend,” the Republican lawmaker said in a statement released through his lawyer, after a court hearing in Allegheny County on Wednesday. “This is nobody’s fault but my own, and I offer no excuses. To the extent that there should be any blame in this matter, it falls solely upon me.”

The congressman added, “I ask the media to respect the privacy of my family. They have done nothing wrong and deserve to be left alone.”

On Tuesday, The Pittsburgh Post-Gazette published leaked text messages between Edwards and Murphy from January over a pro-life Facebook post on his work page:

“And you have zero issue posting your pro-life stance all over the place when you had no issue asking me to abort our unborn child just last week when we thought that was one of the options,” Shannon Edwards, a forensic psychologist in Pittsburgh with whom the congressman admitted last month to having a relationship, wrote to Mr. Murphy on Jan. 25, in the midst of an unfounded pregnancy scare.

A text from Mr. Murphy’s cell phone number that same day in response says, “I get what you say about my March for life messages. I’ve never written them. Staff does them. I read them and winced. I told staff don’t write any more. I will.”

The article from the Post-Gazette also revealed turmoil within his office from his chief of staff Susan Mosychuk:

The memo says that its purpose was to detail the problems as they related to the office manual as well as the Congressional Accountability Act and seek corrective action.

The memo recounted events from June 2 and June 5 involving a visit Mr. Murphy made to his home district.

“You were storming around as we walked in, and as we sat down for prep — having just arrived literally moments ago — you started in on the [legislative director] and verbally abused him, harassed him, chastised him and criticized all his work products. You called many of the work products that he literally gave up his weekend to produce as ‘useless.’ You pushed other documents off the table onto the floor because they weren’t what you wanted. Then you got angry and demanded we find the documents that you had just thrown on the ground.”

Hell, they would have bought him a new car (one that does not float) and called him the Lion of The House.

things to do to avoid having this problem in your life:

you may thank me later.

Is there anything more “swampy” or elitist than a guy who really thinks he can get away with being so two-faced or hypocritical? Especially if the is an R after his name. The media will put triple effort into disgracing them.

The media would much rather have him stay around so they can continue to point to him as an example of ALL REPUBLICANS.

I read a statement by him to the effect that the positions on abortion came from his staff. He had to read them in the “papers”, I guess…

Anything to get menendez off the hot seat I guess, not that the msm has been covering it much.
Maybe Texas will elect someone with enough balls to tell the dems and media to eff off.

from wiki –>
Murphy was born in Cleveland and was raised in Northfield, Ohio, where he attended St. Barnabas Catholic School and Walsh Jesuit High School. He received his Bachelor of Science from Wheeling Jesuit University, his M.A. from Cleveland State University, and his Ph.D. in psychology from the University of Pittsburgh. <–
so he seems to be a married Catholic, Psychologist whp broke his marriage vows.

couldn't keep his Peter in his pants.
he seems to have thought that as long as he was breaking his vows to
his wife and Church he might as well as add some other sins to his column.

what a jerk (off).
don't know if he could not get a divorce.
in any case, he acted in an dishonorable fashion and we are well rid of him,
swamp gets drained a single drop at a time.

You ready to tar T-rump with the same brush?

How did Trump come into this?

as far as Murphy – it seems like Congress attracts the kind of character who thinks rules are only for “little people”, never for them.

And to be clear why what he did justified him being pushed out of office – he just told the world, loud and clear, that even when it comes to something as important as his own child’s life, he will sell out anything he said he believes at the drop of a hat, just so long as he thinks it will help him out personally to do so.

How did Trump come into this?

Little wonder this is a mystery to you.

GOPe hack typifying most of the rats occupying high office.

As a republican, behavior like this is the kiss of death.

For a democrat, it is a resume enhancer.

Interesting how the R’s immediately insist on a resignation, and get one, at the first sign of trouble with one of their own while the D’s never fail to circle the wagon’s and protect even the most corrupt until it is absolutely impossible to do so.

I wonder if Senator Menendez will resign even after he is convicted.

Hilarious watching Bernie Sanders splutter with shock at the mere thought that he ought to resign AFTER he’s been convicted. Why would he??

This clown got bad advice. All he had to do was switch parties, caucus with the democrats, and get Hillary Clinton to destroy the character of his mistress, and he could have stayed in Congress for life … maybe even run for President.