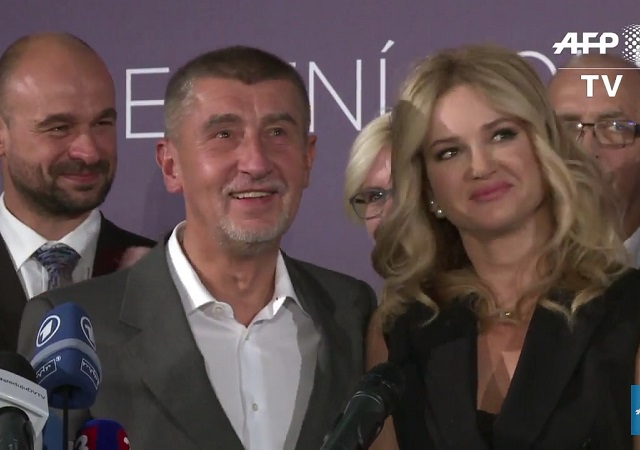 It is getting lonely for Germany’s Chancellor Angela Merkel on the European stage as another EU member country elects an anti-establishment government. Less than a week after the stunning electoral performance by  Austria’s right-wing Freedom Party, the Czech Republic has elected the anti-EU candidate Andrej Babis and his party in yesterday’s general election.

Often described by the media as ‘Czech Donald Trump,’ 63-year-old Babis, the country’s second-richest man, won 30 percent of the vote, securing him the Prime-ministership in the next coalition government. Despite an ongoing criminal investigation over his business dealings and the lingering allegations of his collaborating with the Czechoslovak communist-era secret police, many Czech voters preferred voting for Babis than other pro-EU career politicians.

“Rightward shift in the Czech Republic,” complained the German newspaper Tagesspiegel. “[Besides Babis] other Eurosceptic and anti-immigration protest parties, too, have made it into the parliament.”

“Die Mini-Trumps in Eastern Europe,” read the headline from the German public broadcaster MDR, referring to the rise of Babis and other Eastern European leaders pursuing anti-EU nationalist agenda.

“It is a worrying sign,” Swiss People’s Party (SVP) politician, Claudio Schmid told Legal Insurrection. “It is quite similar to what is happening in the Eastern Germany. The people feel abandoned by the false politics of Europe, especially the one being pushed by Germany.”

The left-wing Social Democrats, who led the last coalition government, got a little over 7 percent of the vote, posting their worst showing since the country split from Slovakia in 1993 after the fall of the communist Eastern Bloc.

Another big winner of the day was the anti-Islamization Freedom and Direct Democracy (SPD) lead by the half-Japanese entrepreneur Tomio Okamura. “We want to stop any Islamization of the Czech Republic, we push for zero tolerance of migration,” Okamura told reporters after winning 10.7 percent of the vote in yesterday’s election.

According to media reports, Babis will not be inviting the right-wing SPD to the coalition talks.

Babis may be a successful billionaire who ran a popular nationalist campaign, much like Trump did in 2016, but that’s where the similarities end between both leaders. Right after winning the election, Babis reassured the EU commissars sitting  in Brussels that he would not be taking his country out of the EU. “It is not true that we are any threat. We are pro-European!” Babis said.  “I am ready to fight for our interests in Brussels.”

Babis might have succeeded in channeling voter dissatisfaction over the EU power grab at the cost of national sovereignty or their rejection of the EU migrant policy, but—for the time being—he is not leading a popular revolt against the establishment.

By distancing himself from the anti-Islamization SPD party, Babis has made it clear that he does not see the right-wing party’s voters as part of his potential support base.

Babis may make it more difficult for the EU to push its agenda at the European stage, but—going by the post-election statements—Babis is certainly not the second Viktor Orbán that many on the European right have been waiting for.

Allegations of nefarious dealings without proof? He is just like Trump!